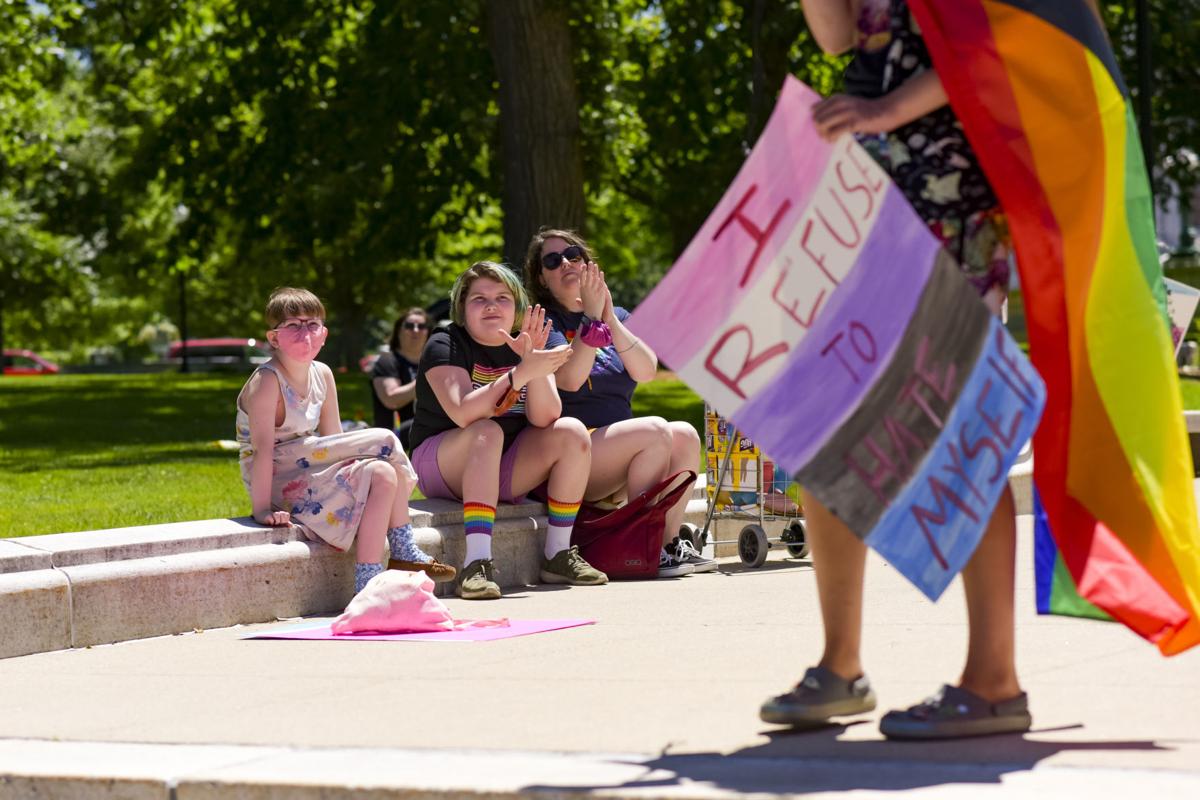 Attendees of a transgender rights rally applaud the words of a speaker outside of the Wisconsin State Capitol building on Wednesday. 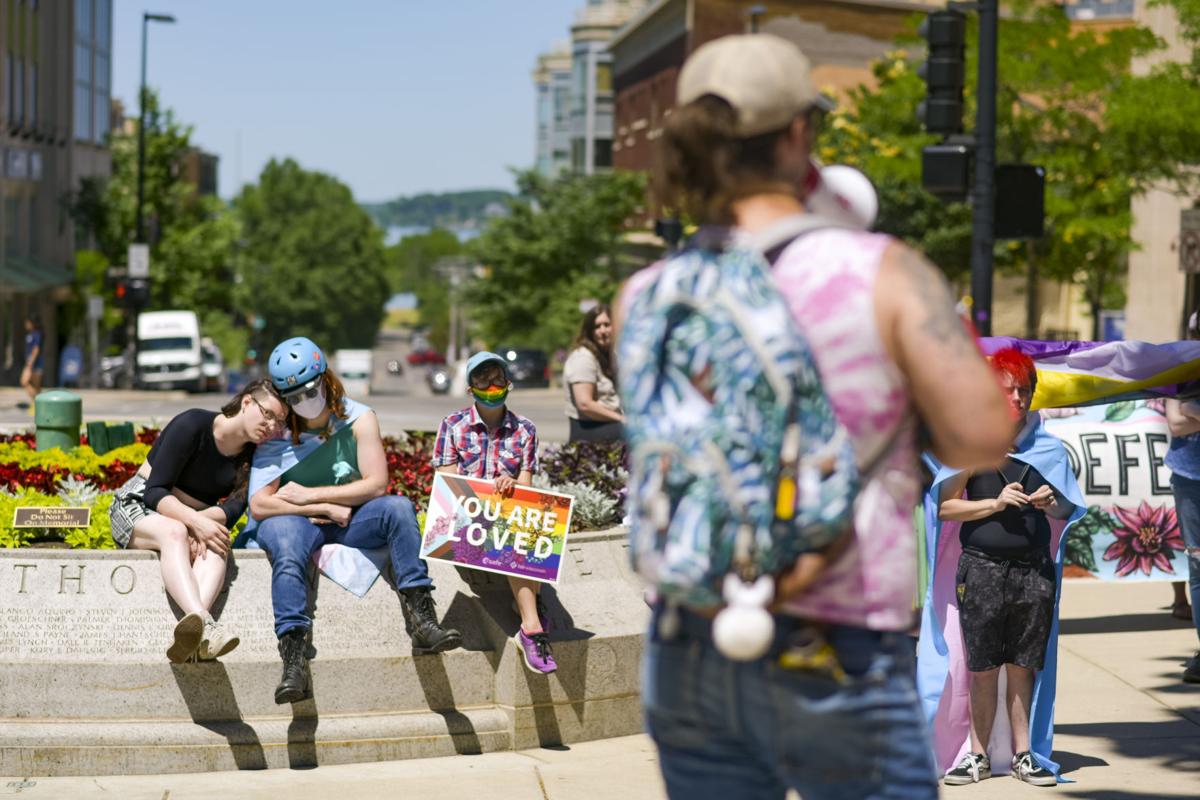 Attendees of a transgender rights rally listen to a speaker outside of the Wisconsin State Capitol building on Wednesday. 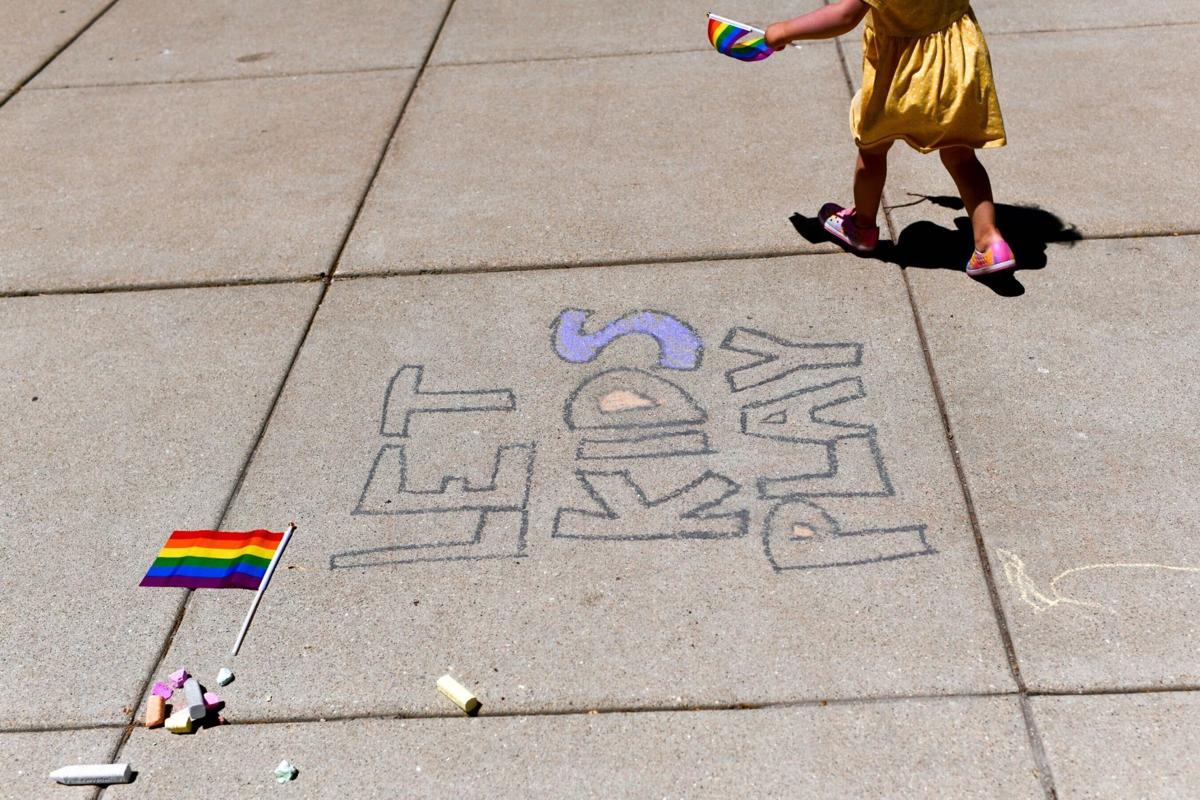 LGBTQIA advocates rallied outside the Capitol before the Assembly's floor session Wednesday, including chalk support for transgender youth.

Hours after protesters chanted “Let Who Play? Let Kids Play!” on the Capitol Square, state Assembly Republicans approved a pair of bills that would limit the participation of transgender students in K-12 and college athletics on a party-line vote.

Democratic Gov. Tony Evers is almost sure to veto the bills, which would prohibit schools from allowing students to join teams that don’t correspond to their biological sex at birth unless schools created a “coed” sport opportunity — if the bills pass the state Senate and reach his desk.

The divide between the parties on the issues of equality for transgender people was made clear early in the day Wednesday, as the LGBTQ Caucus announced a slate of bills as part of its “Equality Agenda.” All of the legislators in attendance were Democrats.

The bills on transgender athletic participation drew passionate testimony at public hearings last month, with more speakers against them than in favor. According to the Wisconsin Ethics Commission, both bills had only one organization lobbying in support, with 14 registrants lobbying against the college bill and 29 against the K-12 bill.

Those in opposition to the bill have pointed out that the problem is largely nonexistent in Wisconsin, anyway, and the Wisconsin Interscholastic Athletic Association already has rules in place governing the participation of transgender individuals. Additionally, given higher rates of depression, anxiety and suicide among transgender youth, they said the bills would do further harm to already vulnerable students.

Rep. Dianne Hesselbein, D-Middleton, called it “absolutely despicable” to be bringing this bill up during Pride Month.

“These bills do nothing to protect anyone, but they cause significant damage,” she said.

Those supporting the bills said allowing transgender girls to participate in girls' sports put the hard-won rights of female athletes at risk. That concern was echoed on the Assembly floor Wednesday.

Dittrich was one of two Republicans to speak during the session, with Rep. Janel Brandtjen, R-Menomonee Falls, also expressing her support. Dittrich called some of the criticism and her and other Republicans from Democrats “really unkind rhetoric,” and said her concern on this issue came after hearing from constituents.

“I could not be more proud to give these women a platform to tell their story, to tell how their merit has been stolen by biological males. To imply otherwise is equally cruel.”

During the Assembly Committee on Education hearing last week, other Republican representatives offered their support. Committee member state Rep. Donna Rozar, R-Marshfield, said then she was “offended” by testimony from people who repeatedly said “transgender women are women.”

[GOP bills would restrict teaching of race, bias in schools]

Memorial High School senior Amira Pierotti, who identifies as nonbinary and participated in the press conference announcing the Equality Agenda, told the Cap Times at the rally outside the Capitol that Wednesday was a “mixed bag” of feelings, pointing to the 50 or so people in attendance.

“The two Assembly bills are being voted on, and they're going to pass, and it's just really difficult,” Amira said. “But then again, there’s so many people here. We were not sure that a lot of people would show up and it's such a showing and it's amazing to be surrounded by trans and gender expansive people, to be surrounded by LGBTQ-plus people and allies.”

Rep. Lee Snodgrass, D-Appleton, noted that the bills would not likely become law and suggested those who voted in favor “should be ashamed of themselves.”

“You are playing to your base to score political points,” Snodgrass said. “This is political theater, which has turned into an exercise in cruelty and harm for young people and children in Wisconsin.”

Madison School Board member Nicki Vander Meulen attended the rally before the vote. The School Board last month read a resolution against “any legislation or action that dehumanizes, marginalizes, or violates the rights of transgender, nonbinary, and all LGBTQ+ students,” and the district published a position statement against the legislation.

“I was one of the ones who read the resolution saying we support our trans athletes, they have the right to be there,” Vander Meulen said. “I was raised as a coach's kid, and to use athletics to punish children is one of the most insidious ways of doing it; you are trying to take a child, and turn them into a political pawn.”

Pierotti did not plan to watch the Assembly’s debate or vote after the rally, where the crowd chanted “trans women are women” and “trans men are men” and young children wrote trans-positive phrases in chalk on the steps leading to the Capitol building.

The bills, which cover both K-12 and collegiate athletics, received public hearings in three committees Wednesday.

The bills, if they do pass the Republican-controlled Legislature, are likely to be vetoed by Democratic Gov. Tony Evers. But advocates say the introduction of the measures is damaging to transgender youth across the state.

The proposal comes as conservatives around the country rally against what they call "critical race theory" in K-12 classrooms.

Attendees of a transgender rights rally applaud the words of a speaker outside of the Wisconsin State Capitol building on Wednesday.

Attendees of a transgender rights rally listen to a speaker outside of the Wisconsin State Capitol building on Wednesday.

LGBTQIA advocates rallied outside the Capitol before the Assembly's floor session Wednesday, including chalk support for transgender youth.