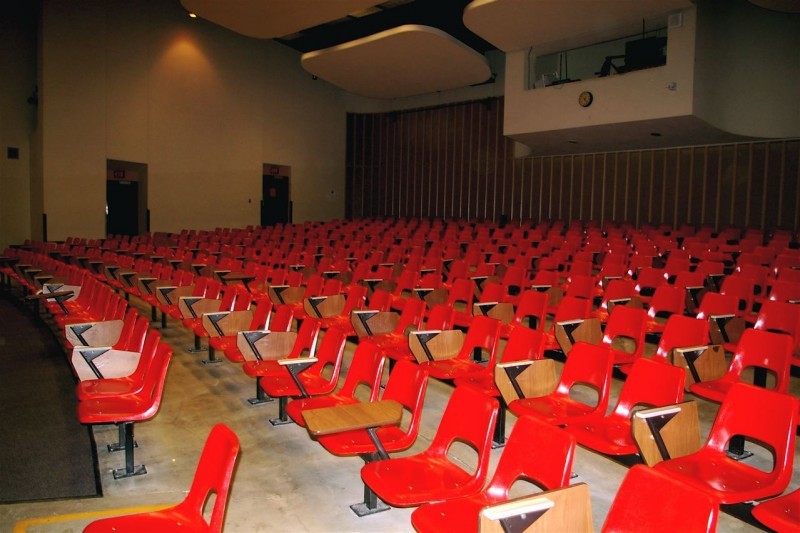 The orange plastic bowling chairs, bolted to a concrete floor, may have been the height of utilitarian chic when East's original theater was remodeled in the early 1970s, but they're hardly conducive to long performances. 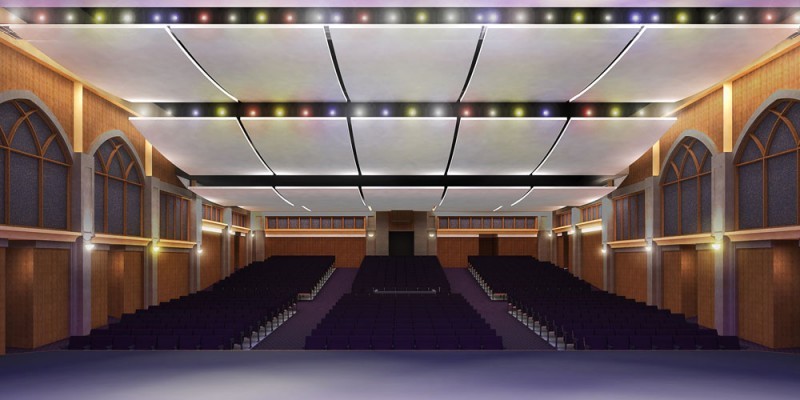 An architect's rendering of the proposed auditorium at East High School. 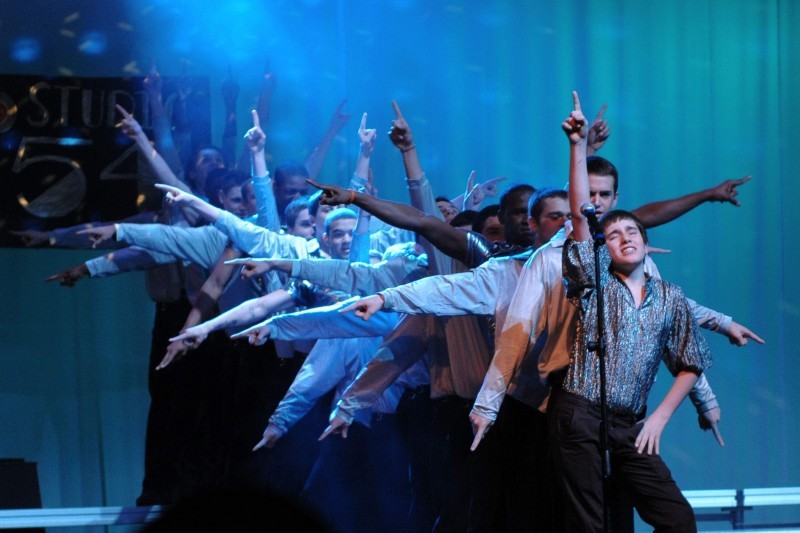 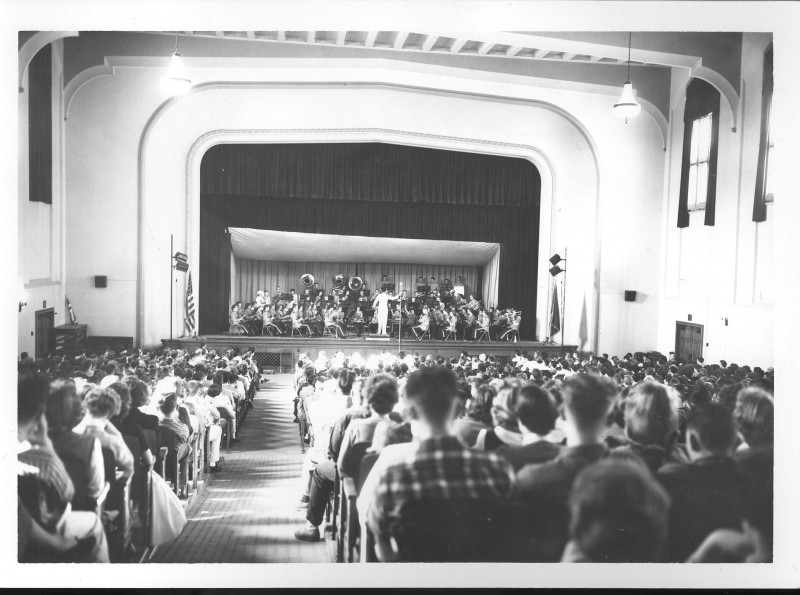 A view from the back of the East High School auditorium in this archived photo. 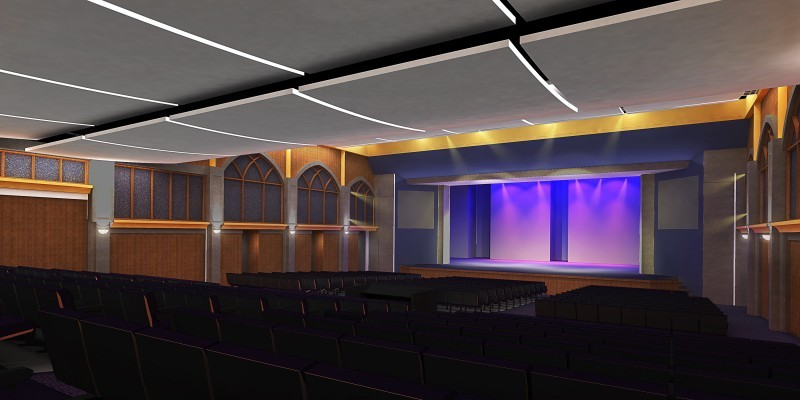 A rendering of how the Madison East High School auditorium could look.

When the curtain goes up at East High, the school's talented musicians, singers, dancers, actors and spoken-word artists have a well-deserved reputation for creating an enchanting world onstage. That's good, because East's real-life theater is one of the most awkward, uninspiring performance venues in the county, if not the state.

Consider the orange plastic bowling chairs, bolted to a concrete floor. These backbreakers may have been the height of utilitarian chic when East's original theater was remodeled in the early 1970s, but they're hardly conducive to long performances. In fact, after a two-hour play or a 90-minute concert, ardent fans have been heard quietly cursing the theater's discomfort even as they praise the quality of the performances.

Then there's the cramped, inadequate size of the theater, also a legacy of the remodeling that transformed the original, elegant Jazz Age theater with a 765-seat capacity into two study halls, one of which now doubles as the theater/auditorium.

Seating about 350, the theater's restricted space presents a problem for popular performing arts programs and for such school events as freshmen orientation, where an entire class can't fit in the room. Despite these limitations, the theater/auditorium is in almost constant use, booked 160 out of 180 schools days each year, says Biz Johnson, whose children - graduates of East - were involved with award-winning performing groups at the school.

Johnson is part of a group of enthusiastic East boosters who have been working quietly for the last couple of years to organize an ambitious, $4 million private fundraising project to build a new, larger space reminiscent of East's vintage theater, with contemporary aesthetic elements and 21st-century technology for sound and stagecraft. The group, known as Raise the Curtain, is ready to kick off its fundraising campaign this spring, and backers are hopeful they will be able to raise the money to once again make East's public performance space a source of community pride.

The goal is to have the new theater in place in time for East's 90th anniversary in 2012. Backers admit the goal is lofty, especially given the current economy. But they say the East community is known for its generosity and pride of place, and that the need for a better theater and auditorium at East is no secret.

Currently, there's a significant mismatch between the quality and sophistication of what the students are capable of doing onstage and the dreary physical facilities. A new theater, boosters say, would provide room for larger audiences and more comfortable seating. A redesigned, updated theater would pay tribute to the school's distinctive architecture and venerable history, and would provide a community gathering place. State-of-the-art sound and lighting would provide a wealth of new creative opportunities for productions, and stagecraft wouldn't be limited by the theater's worn-out equipment or cramped space.

Now, when visitors venture backstage, students and staff are apologetic, ready with warnings about where to step. The space is tiny and dingy, with scarred, ancient plumbing and an atmosphere that wouldn't be out of place in a crime drama. "You kind of wonder what guest artists and performers must think when they walk backstage," says Carla Shedivy, who is also on the fundraising committee.

"The theater's sound system buzzes," adds Kari Douglas, another East High parent and member of the Raise the Curtain group. "The acoustics, with the concrete floor, are terrible. The heating and air conditioning system is so noisy, you sometimes can't hear actors' lines. Dancers have complained about getting splinters in their feet. The kids deserve better than this. So does the audience."

Even though the conditions have been shabby for years, the performances and performers are anything but, backers say, with East having a venerable tradition of providing a rich environment for the arts, both for students and for the whole local community. Excellence in the face of adversity is part of East's distinctive, scrappy, unbowed reputation. The attitude is a component of what students, faculty and friends of East call "East Side Pride," a binding sense of community identity that stretches across social, ethnic and economic lines at Madison's oldest and most diverse high school.

That sense of community character was evident in 2004, when East was one of the first high schools in the country to produce "The Laramie Project," a bold play about the murder of a young gay man in Laramie, Wyoming. When out-of-state anti-gay activists came to Madison to protest the performance, community members of all ages rallied to support East's drama department, selling out all shows and staging counter-protests on behalf of the student actors, crew and advisers.

Then there was the development of the East band's All That Jazz annual dinner and dance (this year on April 9 at the Masonic Temple), an annual fundraising effort

that began a half-dozen years ago. With school funding cuts, the East band was struggling with a big baritone saxophone, held together with duct tape. So the dinner/dance funding goal that first year was to raise $2,500 from the community. It came up with $9,000 the first year, and $13,000 the second year. Organizers were delighted, of course, but not totally surprised.

Most recently, East orchestra director Jackie Dhoore Becker conducted the world premiere of a remarkable piece of music for drums, strings and soprano sax. It was commissioned by the school and composed by Garth Neustadter, a rising young student star at Lawrence University.

Neustadter and renowned Lawrence percussion professor Dane Richeson performed with the East musicians in a concert on March 17; through Becker's efforts, Richeson worked with students earlier that day in a master class in drumming.

There have been some celebrities in the arts that have come out of East, too, including actor Bradley Whitford of "The West Wing" and the late, well-regarded street artist Brendan Scanlon, who went by the name SOLVE.

Many believe that Ansel Norris, a gifted young trumpet player who graduates this spring, is on a fast track in the music world. But parents and students say it doesn't matter if graduates pursue the arts after high school, or if they just experience the richness of being part of East's artistic tradition while there: The benefits last a lifetime.

"People absolutely adore this school,' says Douglas, who is a member of the Raise the Curtain group. They hope to find a few "angels" early on who will provide major funding for about half of the theater renovation project, but say they're "almost giddy" about the prospect of approaching the larger East community.

Whether it's local mom-and-pop businesses or East alumni, grandparents or arts fans, the group believes there is abundant generosity in the community.

A remarkable example is Jim Ely, a now-retired custodian at the school who met his wife, Judy, when they were students at East. High school sweethearts, they continued to enjoy a broad variety of music and arts programs at the school throughout their marriage. After Judy died of ovarian cancer in 2003, Jim gave a gift of $5,000 to the school toward improvements for the school's theater in her name.

"I just did it because I love East High School," Ely told the Wisconsin State Journal in 2005. The story noted his annual income was about $40,000.

"Every time the curtain is raised, something magical takes place and our lives are changed," says David Krause, East's dean of students. "There are many, many of us who feel that way."

Madison East auditorium may get boost from public-private matching funds

Madison East High School senior Delia Ross remembers her freshman year band teacher telling students in her class they would be performing in a renovated auditorium before they graduated.

The orange plastic bowling chairs, bolted to a concrete floor, may have been the height of utilitarian chic when East's original theater was remodeled in the early 1970s, but they're hardly conducive to long performances.

An architect's rendering of the proposed auditorium at East High School.

A view from the back of the East High School auditorium in this archived photo.