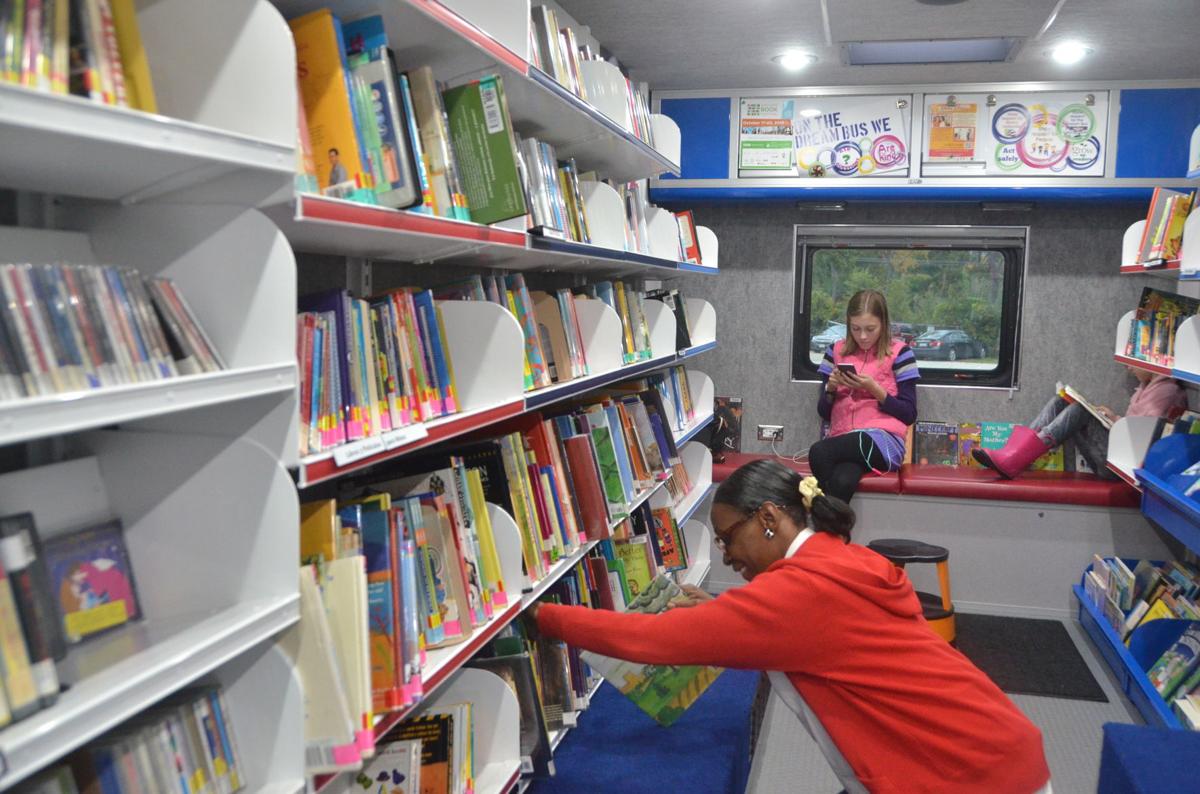 Dream Bus librarian Jacqueline Stevens stocks the bus' shelves while two children use the bus on a recent Tuesday outside Leopold Elementary School. 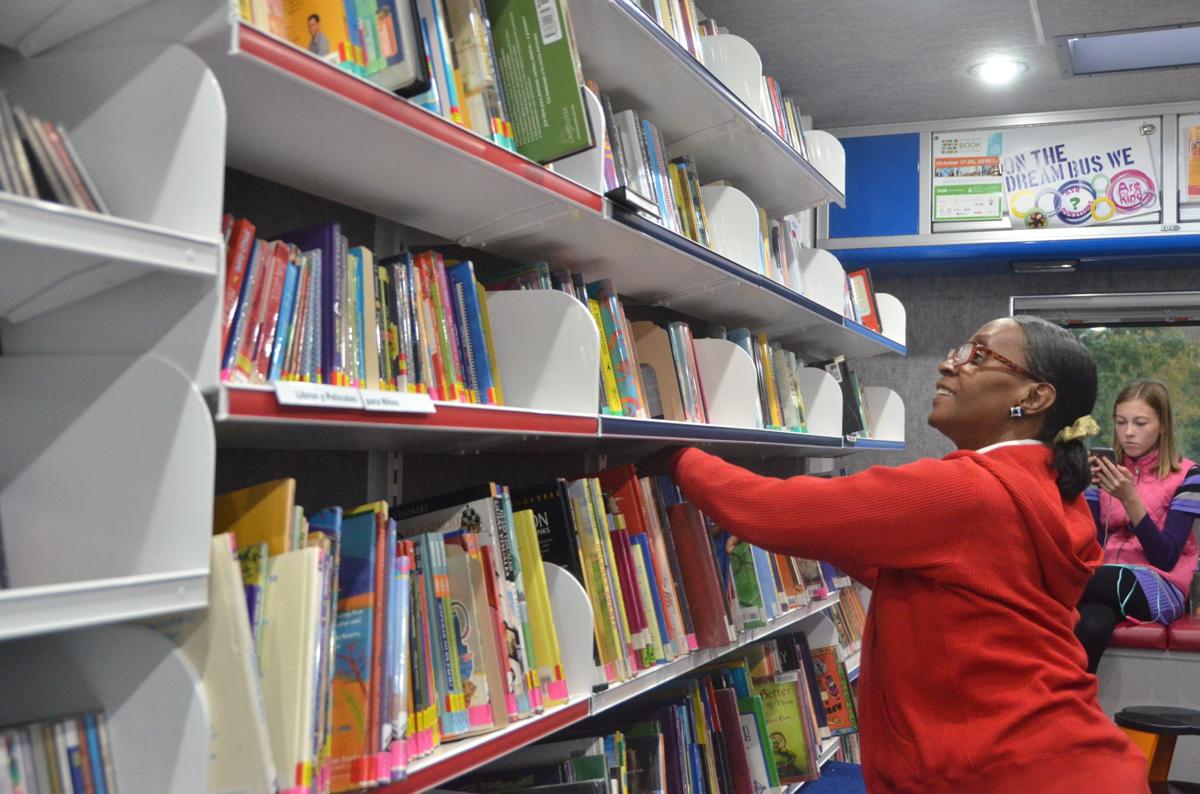 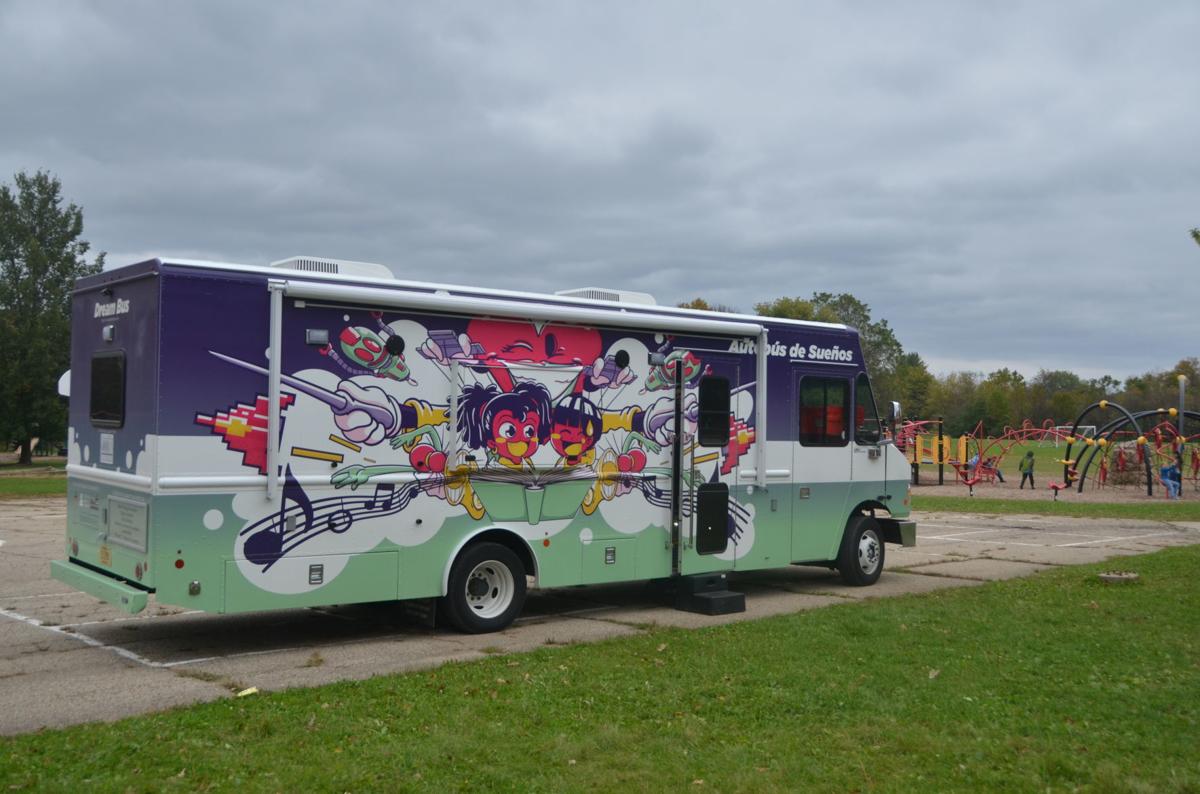 Dream Bus librarian Jacqueline Stevens stocks the bus' shelves while two children use the bus on a recent Tuesday outside Leopold Elementary School.

Every Tuesday around 3 p.m., a few Leopold Elementary School students crowd onto a bus parked outside.

Unlike their peers who boarded yellow buses to go home 15 minutes earlier, these students exit the bus still at school. Hopefully, with a book or two in hand.

The Dane County Library Service’s Dream Bus debuted in April, and this fall it has three Madison elementary schools on its regular schedule: Leopold every Tuesday, Mendota every other Wednesday and Sandburg every other Thursday. It also visits C.H. Bird Elementary School in Sun Prairie every other Saturday morning.

“We have the school and then that’s it.”

It began with a request for DCLS to use one of its bookmobiles to serve Madison’s Owl Creek neighborhood, whose closest library is in McFarland, and not easily accessible by public transit. While DCLS generally offers services only in communities without a library, Herold said the pilot in Owl Creek is still going three years later, with between five and 12 kids showing up weekly.

That helped inspire the Dream Bus, a new and larger version of a bookmobile that serves schools and parks without easy access to a library. Families can sign up for library cards, check out books and use WiFi on the bus. Herold said they’ve issued 324 cards and had 4,433 items checked out since it began.

In addition to the schools, the bus visits community centers and parks Monday through Sunday, with regularly scheduled two hour outings.

A key to families being comfortable accessing it, Herold said, was working with MPL to waive existing fines and fees for overdue books. Gittens and Sandburg librarian Ren Schwab agreed that was helpful, and Gittens said the bus also allows families to use the library system with less concern about finding a bus to get their checked out books returned — instead, they can simply bring them to the bus on Tuesday.

“It was really a wonderful thing to encourage students and say, ‘Look, make sure you care for your books, this is a resource that we all need to share, but don’t be afraid of being punished if there’s an accident,’” Schwab said. “That was one of our concerns, but one of the things they were able to alleviate.”

The bus is helping create “well-informed civic actors,” Schwab said, who can “expand beyond the walls of the classroom” and school library, which is itself well-stocked, he said.

“Students can find any book in the world using WorldCat or inter-library loan and then that can be delivered via the book bus,” Schwab said. “To be able to find your own resources and use them, take that knowledge and make the world a better place is what we’re trying to promote, and libraries do help with that.”

It’s also a good lesson in responsibility, Schwab said, as students have to remember to bring their library card on the day the bus is coming.

Herold noted the availability of bilingual books on the bus, whose staffers speak Spanish. That allows the staff and bus to be a resource for the families of the more than 450 English Learner students at the three Madison schools.

It’s a great example of what opportunities a community school can create, Gittens said, and it was quickly appreciated by the students who have used it so far.

“Rather than families having to go and hunt for resources, we try to bring those resources here,” she said. “For a lot of them, it was just this sense of feeling lucky that this was for them.”

Just under 700 students are enrolled at Leopold, making it the largest elementary school in the district. It's widely recognized as one of the highest-needs schools.

Richard Cherwitz: Will Republicans get away with impeachment maneuvers?