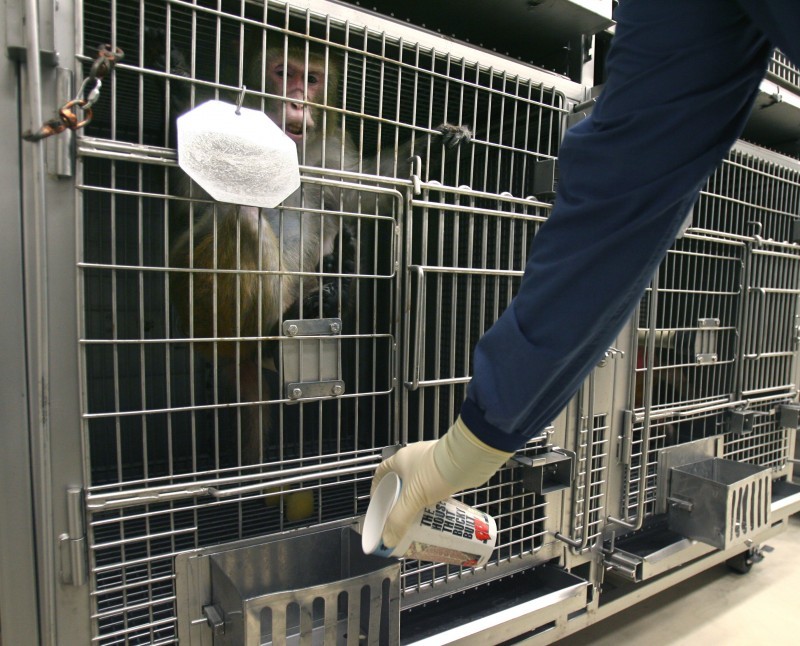 In this photo from July, a researcher at UW-Madison's National Primate Research Center gives a rhesus monkey a carefully weighed portion of food for a study on the long-term health benefits of a low-calorie diet. 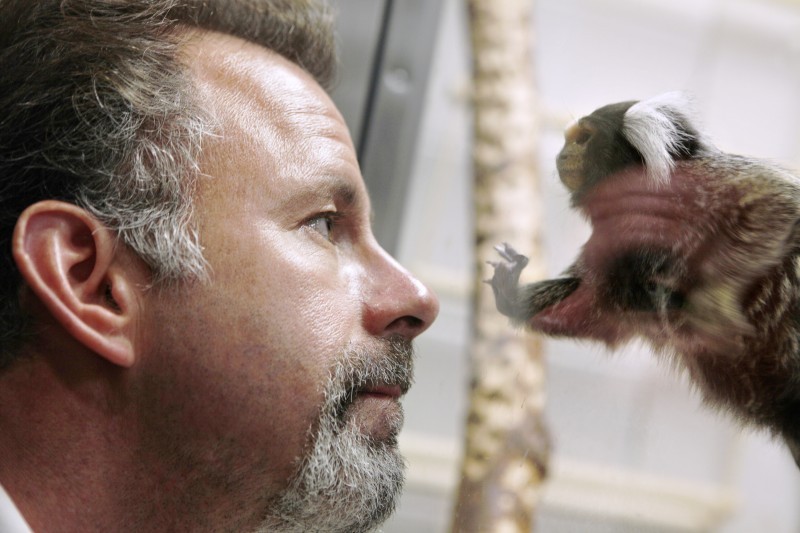 Rick Marolt at the National Primate Research Center in Madison.
1 of 2

In this photo from July, a researcher at UW-Madison's National Primate Research Center gives a rhesus monkey a carefully weighed portion of food for a study on the long-term health benefits of a low-calorie diet.

Rick Marolt at the National Primate Research Center in Madison.

Is experimenting on monkeys ethical?

That's the question Rick Marolt has spent the past four years trying to get someone -- anyone -- on the UW-Madison campus to answer. Not affiliated with the many groups that oppose animal research, the 48-year-old consultant and part-time business lecturer at Edgewood College and UW-Madison has made it a personal mission to push the university for more public self-examination on this hot-button topic.

It's a big deal for the university, which houses some 1,900 monkeys, most of them at the Wisconsin National Primate Research Center. Experiments on everything from AIDS to stem cells using those monkeys brought in more than $46 million in research grants in 2008-2009.

So it was somewhat surprising that the university's All-Campus Animal Care and Use Committee agreed to tackle Marolt's question during its monthly meeting Friday before a standing-room-only crowd of about 40 onlookers in Room 260 of Bascom Hall. The committee put the item on the agenda after some prodding from Chancellor Biddy Martin.

After nearly a half-hour's worth of discussion, Rob Streiffer --- a committee member who is a UW-Madison associate professor of bioethics and philosophy -- proposed a motion: "I move that the committee endorse the position that existing standards of veterinary care and applicable animal welfare laws, regulations and policies provide a suitable and appropriate basis for determining when the use of non-human primates in research, teaching or outreach at the University of Wisconsin-Madison is ethical."

Marolt, who was in attendance but was not asked to participate in the debate, was not amused.

"I think this committee embarrassed the university today because they showed that they literally don't understand the fundamental ethical question that I've posed to them," Marolt said in the hallway afterward. "That they conflate a really important ethical question about experimenting on another species with the welfare question of how well the animals are treated in the labs is unbelievable. Those are two completely different questions. Just because you treat monkeys well doesn't mean it's ethical to experiment on them. Would it be ethical to do experiments on people (without their consent) as long as we treated them well?"

In other words, efforts to move this debate forward appear to have stalled.

"At its heart, this is an issue about the relationship between animals and society," said Eric Sandgren, a committee member who is charged with overseeing animal research on campus as director of the Research Animal Resources Center. "Where is their place in society? I have my own views and I'm fully comfortable with people having their own ideas of what that place should and shouldn't be."

When asked if experimenting on monkeys is ethical, Sandgren's response is "it depends."

"As a guiding tool, we employ the ethical philosophy of utilitarianism, in which actions are justified only after benefits are balanced against harm," he says.

Sandgren says the university explicitly considers whether procedures involving animals are important for advancement of knowledge, improvement of human or animal health, or for the good of society. He notes these "ethical considerations are built into every single review of proposed animal use."

But Marolt argues monkeys deserve a deeper level of ethical consideration. He says researchers have found monkeys make rational decisions, use vocabularies to communicate and have the ability to count, add and plan. He notes UW-Madison's own scientists have studied the complex relationships monkeys have and base their research on monkeys' abilities to experience fear, anxiety and depression.

So, poses Marolt, how is it "ethical to do something to a creature that is similar enough to people to be research substitutes -- not just in physiology but cognition, emotions and social relationships -- but dissimilar enough not to deserve more ethical consideration?"

Marolt says he has no desire to tie his question -- Is experimenting on monkeys ethical? -- to recent reports of animal welfare violations within UW-Madison's massive animal research enterprise.

"To me they are completely separate and I don't want to take an opportunity to beat up on the university over welfare stuff in order to make a point about ethics," he says. "They are different issues. Just think about experiments on people. If we are talking about the same experiments done on people (against their will), would we ever say they're ethical because the people are treated well? The treatment has nothing to do with how ethical an experiment is. But somehow they get confused when we talk about monkeys."

There are some very smart and passionate people on both sides of this argument.

But to put things diplomatically, they have very different ways of looking at the same issue.

"He's wrong," Sandgren said of Marolt's contention that the committee didn't address his question of whether experimenting on animals is ethical.

"He doesn't like the answer we gave and I don't expect everyone will share my view," adds Sandgren. "But our approach of using the ethical philosophy of utilitarianism is a very legitimate approach. I hope it's clear that we took this issue seriously, even if we do have different views."

Monkey experiments will continue at UW

Scientists still believe the research is ethical, given stringent internal and federal oversight. UW-Madison's All-Campus Animal Care and Use Committee approved a statement to that effect Friday.

Todd Finkelmeyer has been covering higher education for the Capital Times since April 2008. He started contributing to the newspaper in 1990, was hired full-time in 1994 and has since covered everything from the Super Bowl to stem cell research.