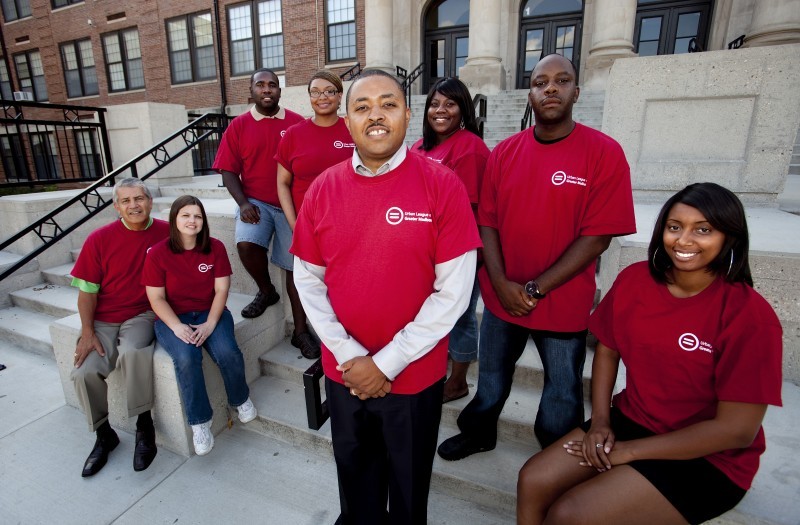 Kaleem Caire, front, with members of the Urban League at Madison West High School. They are (back L-R) David Cagigal, Amy Good, Anthony Cooper, Tonya Ellis, Alicia Cooper, Dion Johnson, and Ronnicia Johnson-Walker. Caire a Madison West graduate, wants to start a charter school through the Madison School District that will provide a classical education for boys in grades 6 through 12. 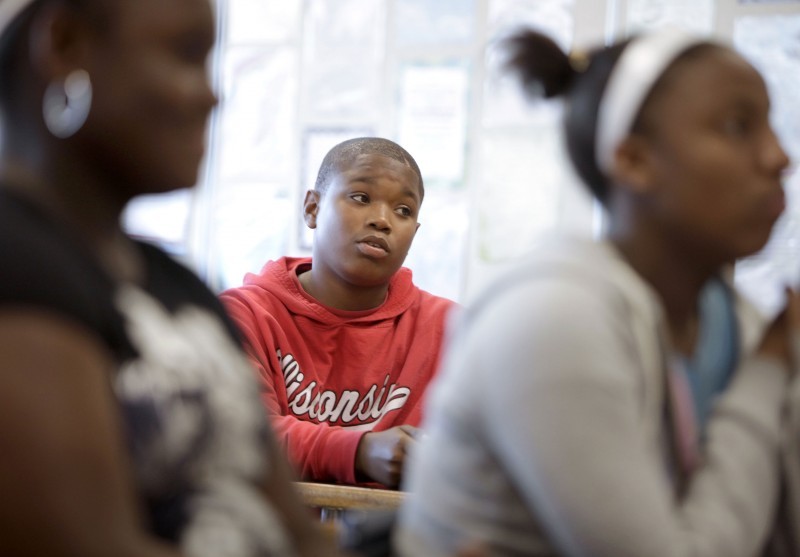 Dyw'quan Morris, an eighth-grader at Wright Middle School in 2009, discusses President Barack Obama's recent visit to the school. The president of the Urban League of Greater Madison would like to see an all-male charter school open in Madison that would be geared toward minority boys. 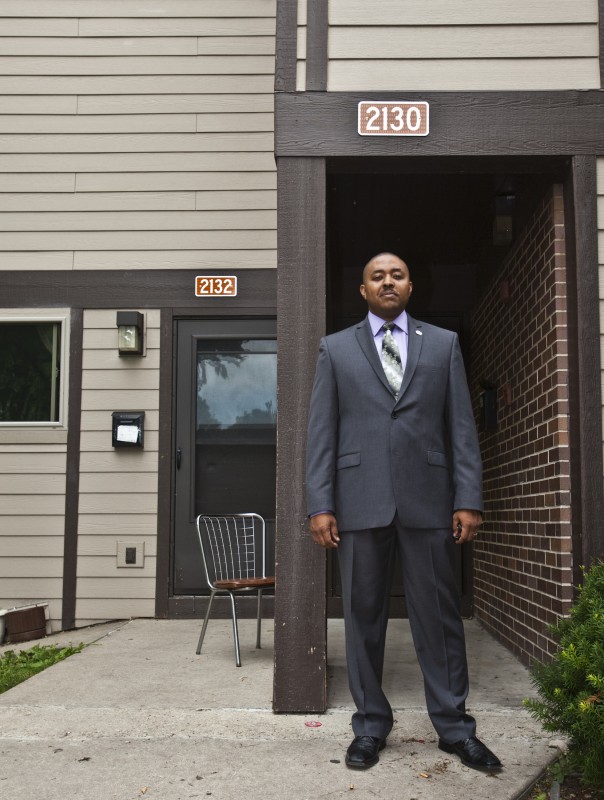 Kaleem Caire, president of the Urban League, stands outside the home where he grew up, just two blocks from the new Urban League building in south Madison.
SUSAN TROLLER | The Capital Times |

Is the Madison Metropolitan School District ready to try a male-only charter school using a rigorous curriculum geared toward boys of color in grades 6 through 12?

Hoping the answer is "yes," Kaleem Caire, the president of the Urban League of Greater Madison, will begin a couple of months of community discussion about the proposal for Madison Preparatory Academy for Young Men (Madison Prep), beginning in the next several weeks.

"In Madison, I can point to a long history of failure when it comes to educating African-American boys," says Caire, a Madison native and a graduate of West High School. He is blunt about the problems of many black students in Madison.

"We have one of the worst achievement gaps in the entire country. I'm not seeing a concrete plan to address that fact, even in a district that prides itself on innovative education. Well, here's a plan that's innovative, and that has elements that have been very successful elsewhere. I'd like to see it have a chance to change kids' lives here," says Caire, who is African-American and has extensive experience working on alternative educational models, particularly in Washington, D.C.

One of the most vexing problems in American education is the difference in how well minority students, especially African-American children, perform academically in comparison to their white peers. With standardized test scores for black children in Wisconsin trailing those from almost every other state in the nation, addressing the achievement gap is a top priority for educators in the Badger State. Although black students in Madison do slightly better academically than their counterparts in, say, Milwaukee, the comparison to their white peers locally creates a Madison achievement gap that is, as Caire points out, at the bottom of national rankings.

He's become a fan of same-sex education because it "eliminates a lot of distractions" and he says a supportive environment of high expectations has proven to be especially helpful for improving the academic performance of African-American boys.

Caire intends to bring the proposal for the boys-only charter prep school before the Madison School Board in October or November, then will seek a planning grant for the school from the state Department of Public Instruction in April, and if all goes according to the ambitious business plan, Madison Prep would open its doors in 2012 with 80 boys in grades 6 and 7.

Forty more sixth-graders would be accepted at the school in each subsequent year until all grades through senior high school are filled, with a total proposed enrollment of 280 students. A similar, same-sex school for girls would promptly follow, Caire says, opening in 2013.

Five things would make Madison Prep unique, Caire says, and he believes these options will intrigue parents and motivate students.

"It's an all-male school, and boys hate looking foolish in front of girls," he says with a smile.

Additional features he considers selling points of the proposed school include its International Baccalaureate program, a curriculum recognized around the world for its academic rigor and emphasis on establishing critical thinking skills; the Harkness teaching method, a Socratic method of shared inquiry and student discussion developed at the Philips Exeter Academy in the 1930s; the role of coach and mentor that each teacher would take with a small group of students; and, finally, the requirement for 160 hours of community service that students would have to fulfill before graduation.

Whether Madison Prep will be welcomed in the school district with the same kind of enthusiasm that has surrounded the launch of another groundbreaking charter school proposal, Badger Rock, remains to be seen.

Badger Rock would be the nation's first urban agriculture school, and it will come up for final approval before the School Board in November. District observers predict the new charter middle school proposed for the neighborhood near Rimrock Road is likely to get a green light from the board, and if so, would open in the fall of 2011. Sponsored by a group of parents, educators and individuals interested in sustainable energy and urban agriculture, the school's powerful partnerships with organizations like the Center for Resilient Cities, Milwaukee's highly esteemed Growing Power group and the University of Wisconsin have given it considerable traction and credibility. Another selling point is that the project is structured to not add costs for the cash-strapped Madison district.

School Board President Maya Cole says she is eager to take a look at the plan Caire will bring before the board, and she says she welcomes anything innovative that will help all kids succeed.

"It will be interesting to see how many people he can fire up about a plan like this," she says.

Although Cole has in the past talked with enthusiasm about educational innovations, she and other board members are keenly aware that there's little money these days for much experimentation. Caire's ability to find funding and deep-pocketed partners for the proposal will likely be a key element affecting how the board reacts to the proposal. Another unknown at this stage of the game is how the Urban League leader and Madison Teachers Inc. would work through what could be thorny issues regarding the flexible, demanding teaching hours that Caire sees as critical to the school's success.

District Superintendent Dan Nerad, who met with Caire recently, says he has not yet seen a business plan that's specific to Madison.

"It's pretty early in the process to comment on the plan, but I'm more than willing to explore options regarding how we're doing and what we're doing," Nerad says. "My hope is that where these concerns exist, that we might be able to explore a variety of solutions as a community."

Much of Caire's initial planning for Madison Prep springs from work he and his wife, Lisa Peyton-Caire, have done since 2005 for the Next Generation Preparatory Academy for Young Men, proposed as a public charter school in Washington, D.C. Initially scheduled as a proposal for D.C. schools this spring, plans were put on hold when Caire returned to Madison in March to take the reins at the Urban League here.

During his decade in Washington, Caire earned a national reputation as an advocate for educational choice for impoverished children and families. He's not shy about taking credit for many of the millions of dollars that began flowing into D.C.-area charter schools when he was executive director of Fight for Children, a nonprofit focused on improving education opportunities for poor children.

Some of the alternatives Caire champions would be brand new to Wisconsin.

Patrick Gasper, spokesman for Wisconsin's Department of Public Instruction, says that although there are currently no models for single-gender public education in Wisconsin, 2006 federal guidelines have established that the practice is not discriminatory if enrollment is voluntary and if comparable courses, services and facilities are available to both male and female students.

One boys-only school that's won considerable praise, both in the media and from Secretary of Education Arne Duncan, is Urban Prep, located in the troubled Englewood neighborhood in Chicago. Its first class of seniors graduated this spring, and all are college-bound. But when the class entered the school as ninth-graders in 2006, they were struggling students with below-grade-level performance and few positive prospects for the future.

That's the kind of success Caire would like to see, although he anticipates greater academic rigor at the Madison Preparatory Academy for Young Men than at the Chicago school.

Caire anticipates that Madison Prep, like Urban Prep, would have a student body that is predominantly black. "We'd be open to any boy in Dane County, regardless of his previous academic performance," Caire explains. But the school's heaviest marketing effort, Caire says, would be toward African-American parents, looking for a different kind of education that puts their sons on a track toward success.

Why charter school for African-American boys is needed

Kaleem Caire, president and CEO of the Urban League of Greater Madison, is shaking up his hometown after a decade in D.C. A top priority is his proposal for a new public charter school in Madison aimed at African-American boys in grades six through 12.

A proposal to open an all-male charter school in Madison geared toward boosting minority achievement faces an uphill battle in a liberal city historically resistant to such alternative public schools, supportive of cultural integration and pro-union.

Chris Rickert: Admitting failure may be best for kids

Approving a charter for the all-boy, mostly black, non-union Madison Preparatory Academy will make it clear that, when it comes to many black schoolchildren, teachers have failed to teach, parents have failed to parent, and the rest of us have failed to do anything about either.

The Madison School Board amended its rules Monday to give itself time to vet an all-male charter school proposal by the Urban League of Greater Madison.

Madison Prep charter school would cost up to $28,000 per student, estimates say

An all-male charter school geared toward Madison's minority population is projected to cost as much as $28,000 per student when it opens in fall 2012 — more than twice as much as another charter school expected to open this fall.

Julie Keown-Bomar and Angela Lang: Rural and urban — we all count

Kaleem Caire, front, with members of the Urban League at Madison West High School. They are (back L-R) David Cagigal, Amy Good, Anthony Cooper, Tonya Ellis, Alicia Cooper, Dion Johnson, and Ronnicia Johnson-Walker. Caire a Madison West graduate, wants to start a charter school through the Madison School District that will provide a classical education for boys in grades 6 through 12.

Dyw'quan Morris, an eighth-grader at Wright Middle School in 2009, discusses President Barack Obama's recent visit to the school. The president of the Urban League of Greater Madison would like to see an all-male charter school open in Madison that would be geared toward minority boys.