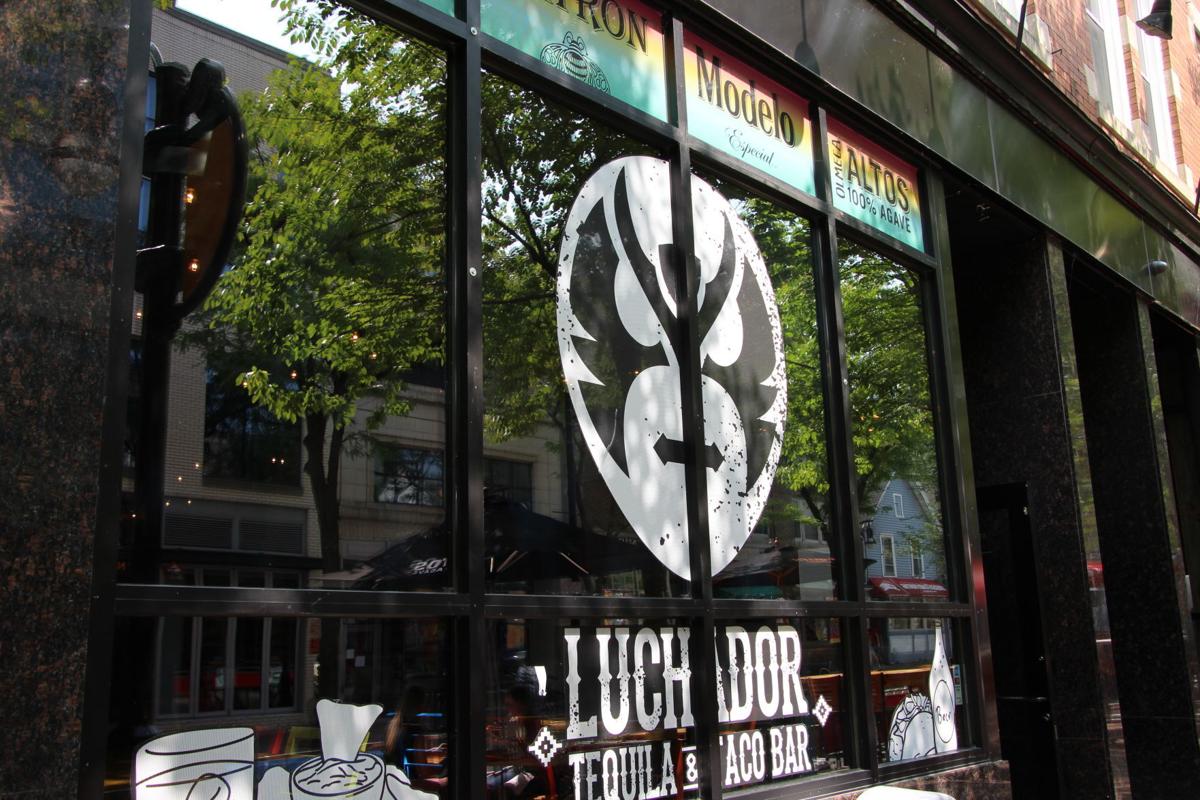 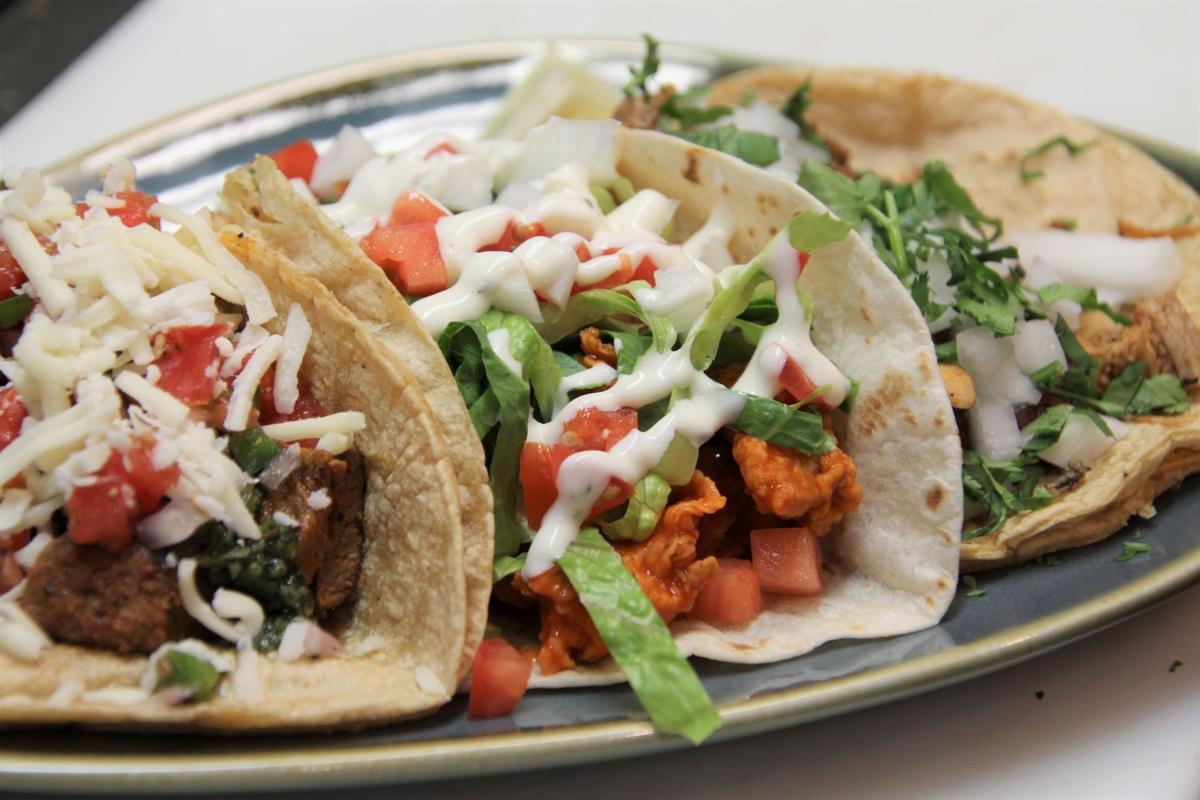 Among 20-some taco options at Luchador Tequila & Taco Bar on State Street are, from left, chimichurri steak, Buffalo chicken and traditional chicken, with onion and cilantro on a corn tortilla. 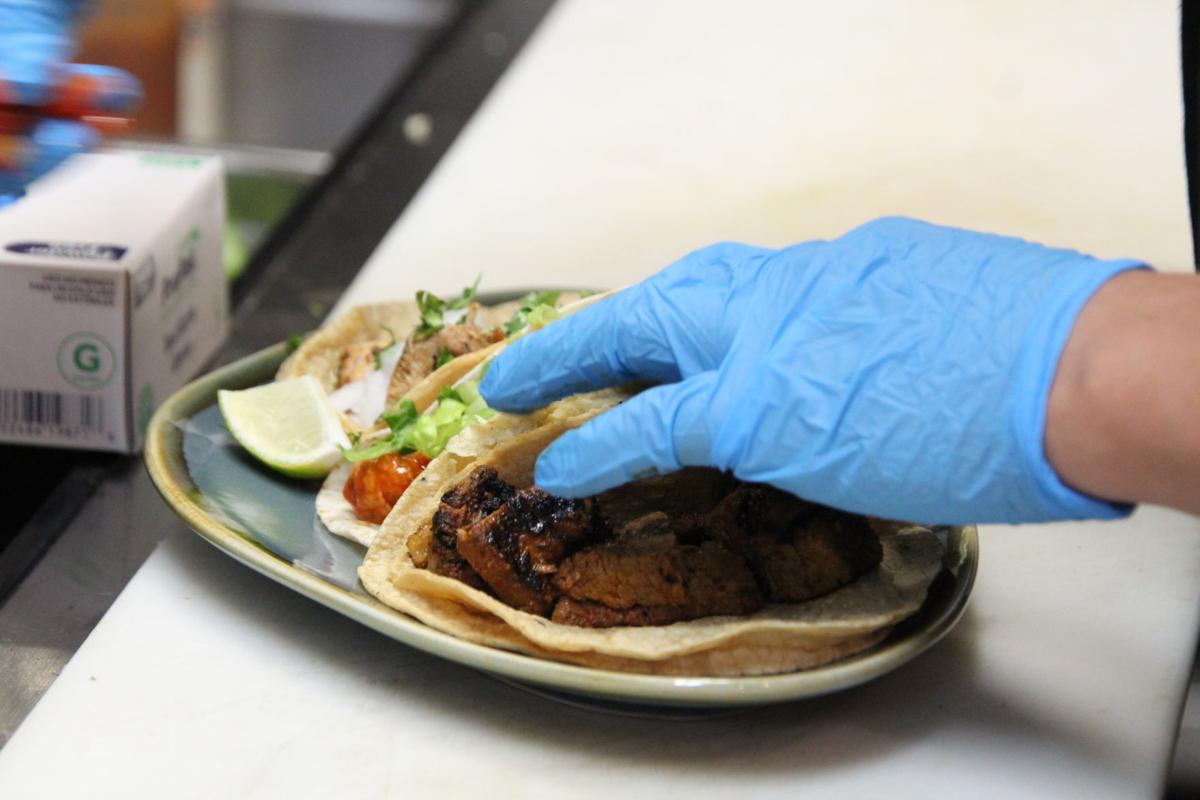 By Victoria Davis, Special to the Cap Times

The first thing people see as they walk by the front window of the new Luchador Tequila & Taco Bar at 558 State St. is a 4-foot-tall, black and white lucha libre wrestling mask.

Inside, there are paintings of Bucky Badger in a lucha libre suit and cape, a Bucky with a mustache wearing a sombrero, and a Star Wars stormtrooper decked out for Day of the Dead, all lit up in neon.

These Mexican wrestling-meets-Madison illustrations — along with a playlist pumping out everything from Elton John’s “Tiny Dancer” to War and Santana’s “Low Rider” — set the theme of State Street’s newest taco bar.

Lucha libre is a popular style of pro Mexican wrestling, known for its over-the-top drama and colorful costumes; a luchador is a wrestler. Restaurant owner Brano Kruger described the look as “traditional meets modern pop culture.”

“Madison has the luxury of having a couple of Mexican restaurants and each one does things a little bit differently,” Kruger said. “You have Los Gemelos which is more of a mom and pop shop. You have BelAir (Cantina), that’s more of a Cali Mex.

“We wanted to try and incorporate more of the fun bar atmosphere into a Mexican restaurant with worldly inspired tacos,” Kruger said. “We want to try and have a little fun and also find a way to bring more people into the Mexican food and taco realm.”

[The Corner Table podcast: At the grill with Heavy Kevy]

Kruger, who was raised in Chicago, said he has family in Mexico and “grew up on Mexican food.” He has service industry roots, too — his grandparents own a bar outside Milwaukee. Kruger was the general manager of Red Rock Saloon in Madison before buying the Madhatter and turning it into Danny’s Pub in 2017.

“Bars and restaurants, they’re like a second home to me,” Kruger said. “I’ve done every job in the restaurant and bar business, starting with bouncing, bartending, serving and working my way up.”

Kruger had planned to open a taco and tequila bar on State since September 2019, but Luchador didn’t open its doors until this past August. Dane County and downtown Madison are still in the midst of the COVID-19 pandemic and related health restrictions, which allow 25% of capacity, about 25 diners, inside the restaurant at a time.

The timing of the restaurant’s opening limited its originally planned menu, but Luchador still offers over 20 types of tacos for dine-in and to order for take-out. These range from traditional chorizo and carnitas to fusion styles, called “Bad Ass Tacos.” Among them are Huevos a la Mexicana ($3.50) with scrambled egg and pico de gallo, Hawaiian Pork ($4.50) with a Hawaiian glaze, and pot roast barbacoa tacos ($4.50) with potatoes and shredded cheese.

One of the specialty tacos, Buffalo chicken ($4), is made with the homemade Buffalo sauce from Danny’s Pub, an Irish-themed bar and grill just two blocks away on West Gorham. Kruger is also the co-owner there.

The variety is “what makes us stand out,” said Luchador’s kitchen manager Ariel Reyes, who hails from Pueblo, Mexico. “Customers have so many taco varieties to choose from on the menu. We don’t just have chicken tacos or pork tacos, there’s Hawaiian or Caribbean pork tacos or Buffalo chicken. It starts traditional, but there are lots of other ways to prepare these tacos.”

Luchador serves margaritas on its patio, starting at $7 for a house margarita ($18/32 oz. mini-pitcher, $35/ 60 oz. full pitcher). There are frozen rainbow margaritas, a blend of lime, strawberry and huckleberry, and variations with mezcal, high-end tequila and watermelon jalapeño. Luchador makes palomas and micheladas as well.

[Bingeworthy: Get some healthier scares on Netflix and elsewhere this October]

“Flamin' Hot Cheetos are one of those pop culture items that everyone loves,” Kruger said. “Ariel and our other chefs came up with a way to really make a beautiful dish that incorporated that. It looks visually stunning and tastes delicious.”

Charlie Todd, Luchador’s restaurant manager, said that even though opening during the COVID-19 pandemic posed certain restrictions, it helped solidify the restaurant as a late night go-to for students looking for tacos past midnight. The restaurant is open from 11 a.m. until “bar time” (2 a.m.). Delivery orders are open until 1 a.m. As both Kruger and Todd put it, “If we’re open, so is our full menu.”

“Putting a food-first concept here on State Street fills a need that isn’t here, especially now with so many places closing early,” Todd said. “Brano’s and my initial concern was that more people would just want to come here and drink, but it’s been refreshing to see how many people do come and come back for our food. There’s a silver lining to be found in everything.”

Luchador offers pick-up for take out orders and works with EatStreet for deliveries. The restaurant hopes to expand to more delivery services to reach more areas in Madison. Luchador is also working on seasonal specials, like spiked horchata and Mexican hot chocolate, as well as  more vegan and vegetarian menu options.

“We were definitely not allowed to open up with the full scope of what we wanted,” Kruger said. “That being said, it let us really dial in and do things properly with what we did have.

“We’re still adding new dishes every day and taking it one day at a time, making sure that we’re doing things responsibly. But I think being something new affords us a little bit more luxury that people want to try us. It’s a fun concept and we’ve got a strong team here. We’re pushing through everything and making sure we fight to stay open.”

The restaurant, open since Aug. 10, offers a variety of traditional seafood boil options such as crab legs, crawfish and shrimp, served with Chinese sides.

In this panel discussion, food editor Lindsay Christians talks with two chefs and an industry advocate about where they’re finding hope in this moment of upheaval.

Clock'd connects bartenders, servers and cooks with restaurants that have shifts to fill. The company has adjusted for COVID and re-launched its app this month.

In this week's cooking column, comforting chicken and rice and a double-stacked apple cake from Smitten Kitchen, and gems from "The Jewish Cookbook."

Looking like a cross between a picnic basket and a Stormtrooper, the squat, six-wheeled Starship delivery robots have transformed how the campus eats.

Among 20-some taco options at Luchador Tequila & Taco Bar on State Street are, from left, chimichurri steak, Buffalo chicken and traditional chicken, with onion and cilantro on a corn tortilla. 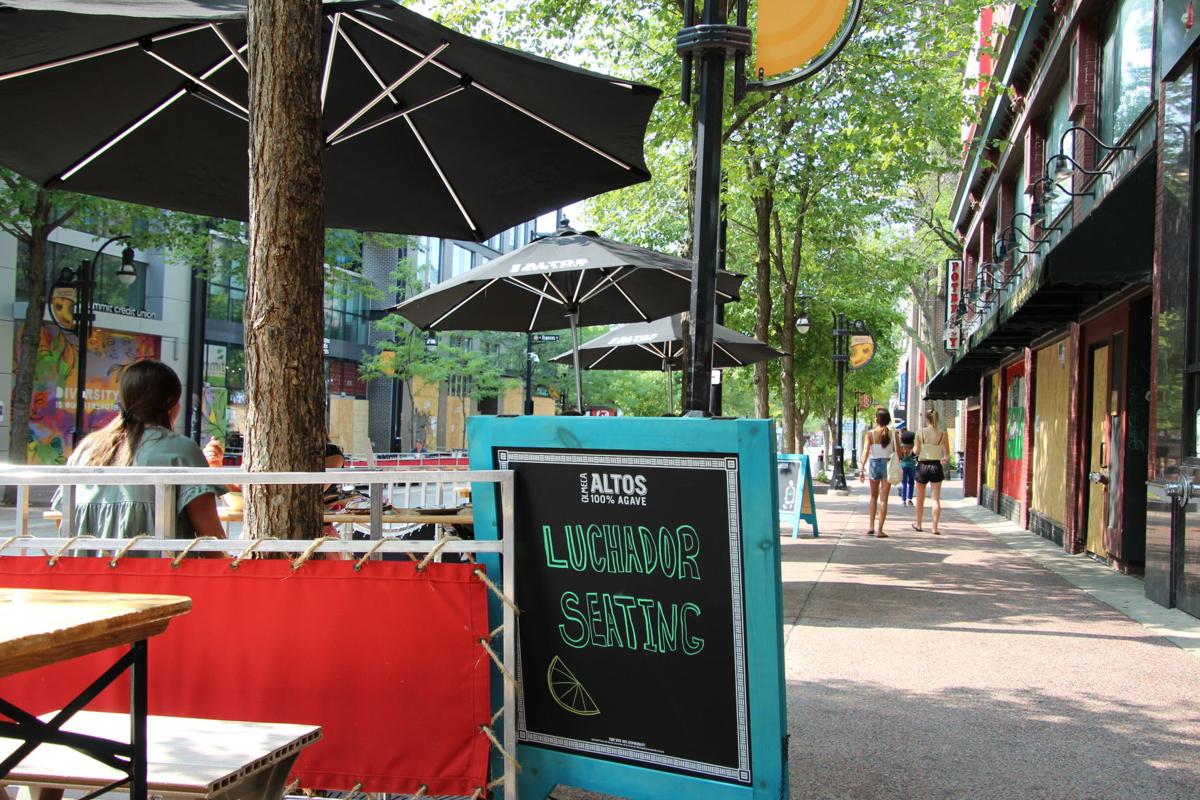 Luchador's patio is open for seating in the 500 block of State Street. Diners can get one of many margarita variations, including with mezcal, high-end tequila and frozen in lime, strawberry, huckleberry and mango flavors, among others. 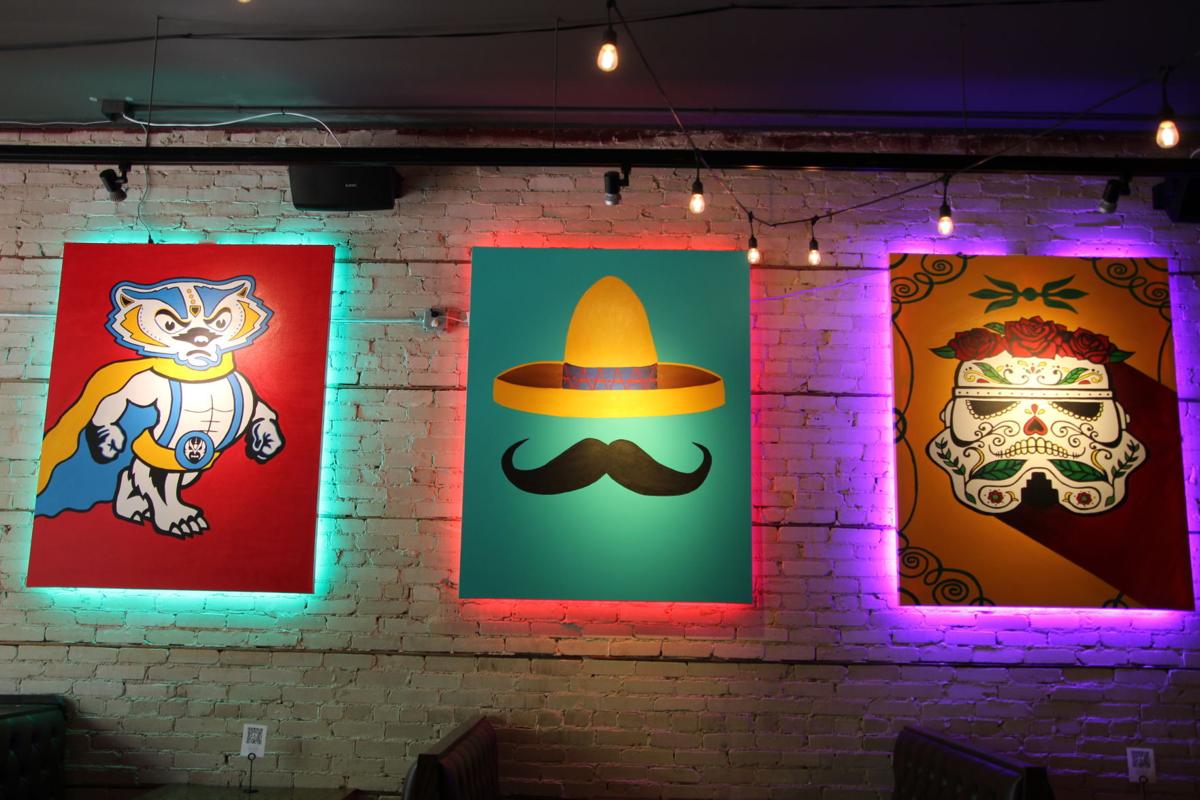 Inside Luchador Tequila & Taco Bar there are paintings of Bucky Badger in a lucha libre cape and a Star Wars stormtrooper decked out for Day of the Dead, all lit up in neon. 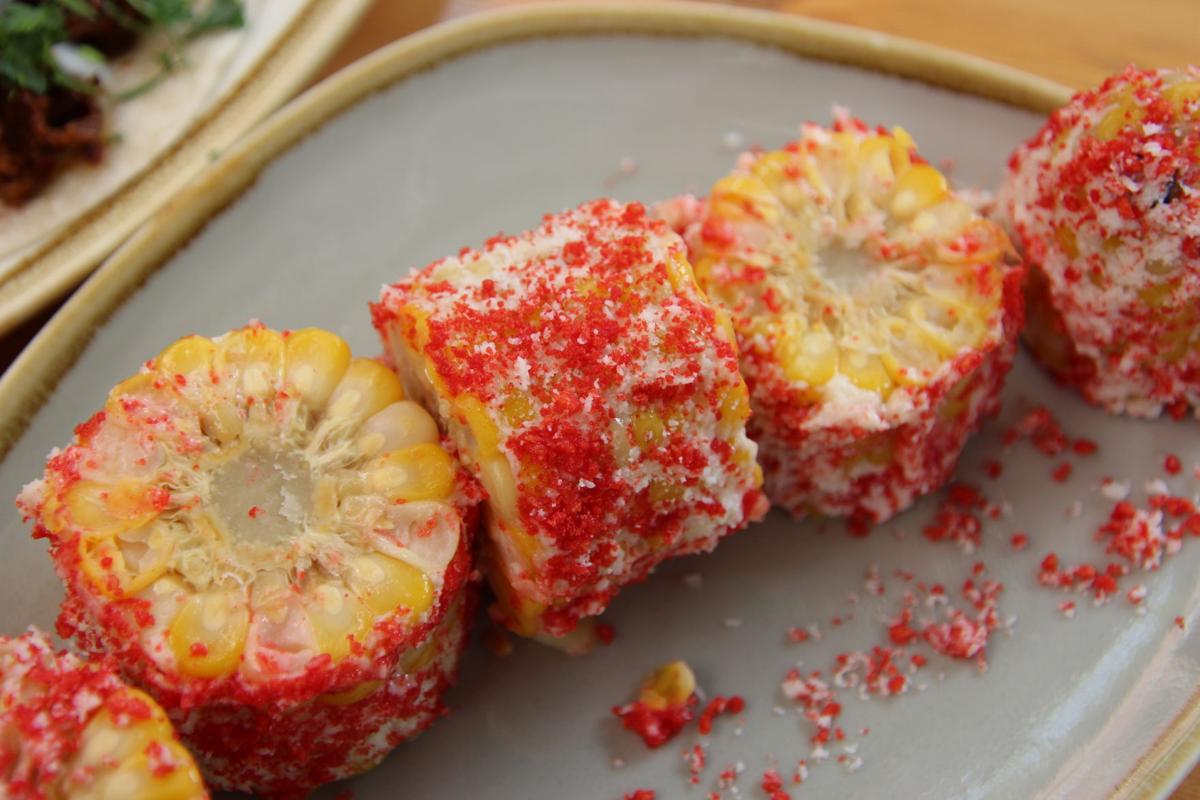 Bad Ass Elotes at Luchador Tequila & Taco Bar are corn on the cob with mayo or butter, cotija and Flamin' Hot Cheetos dust. 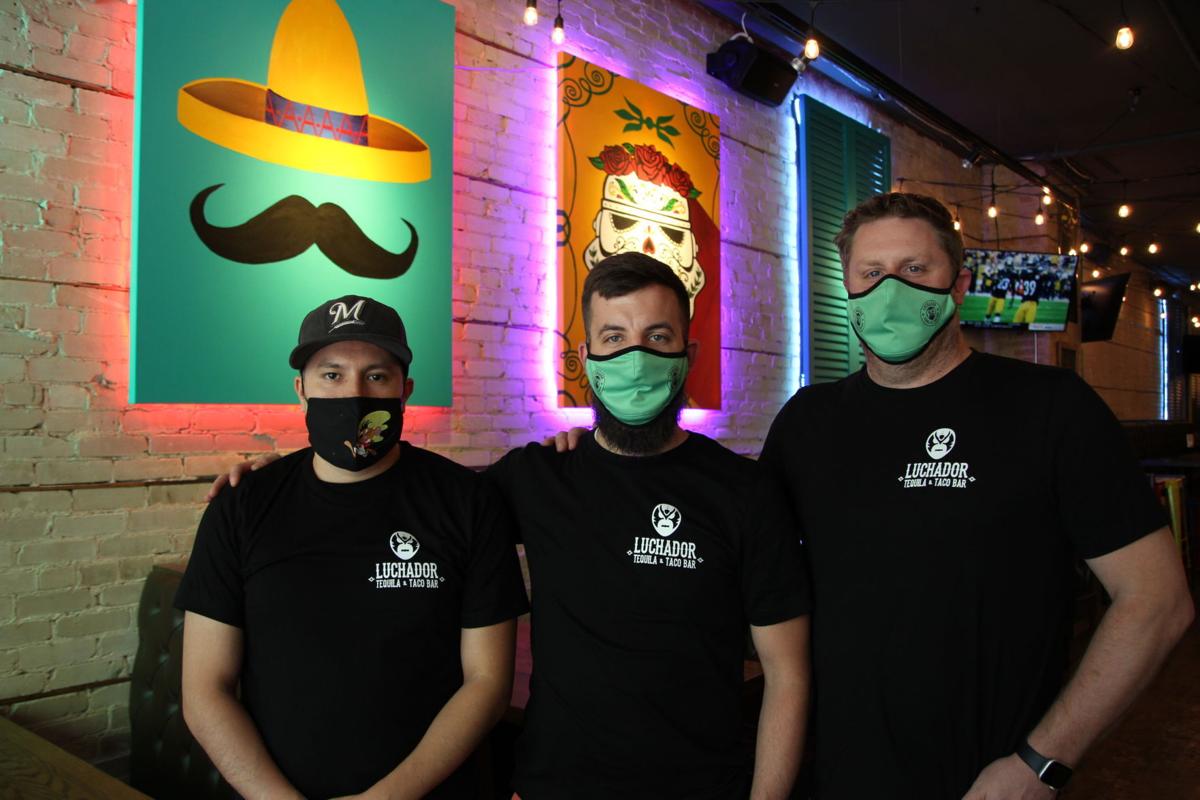 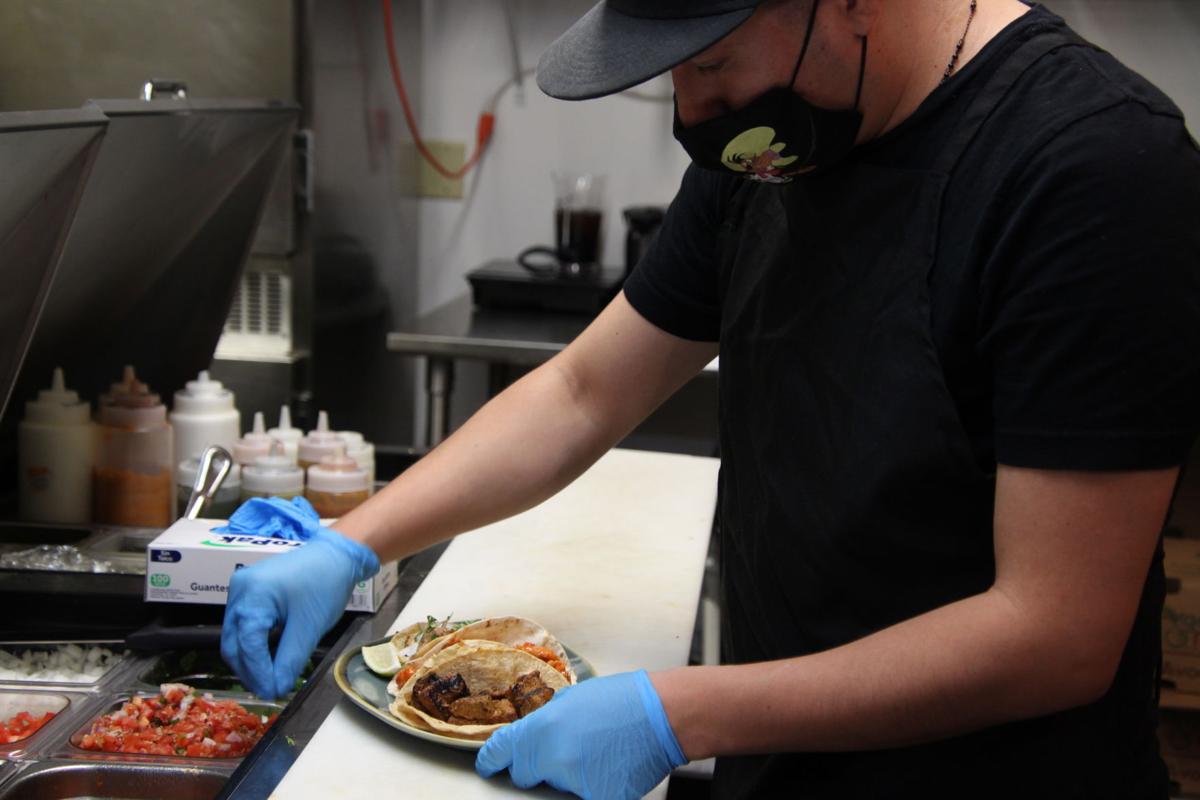 The variety of tacos is “what makes us stand out,” said Luchador Tequila & Taco Bar's kitchen manager Ariel Reyes.