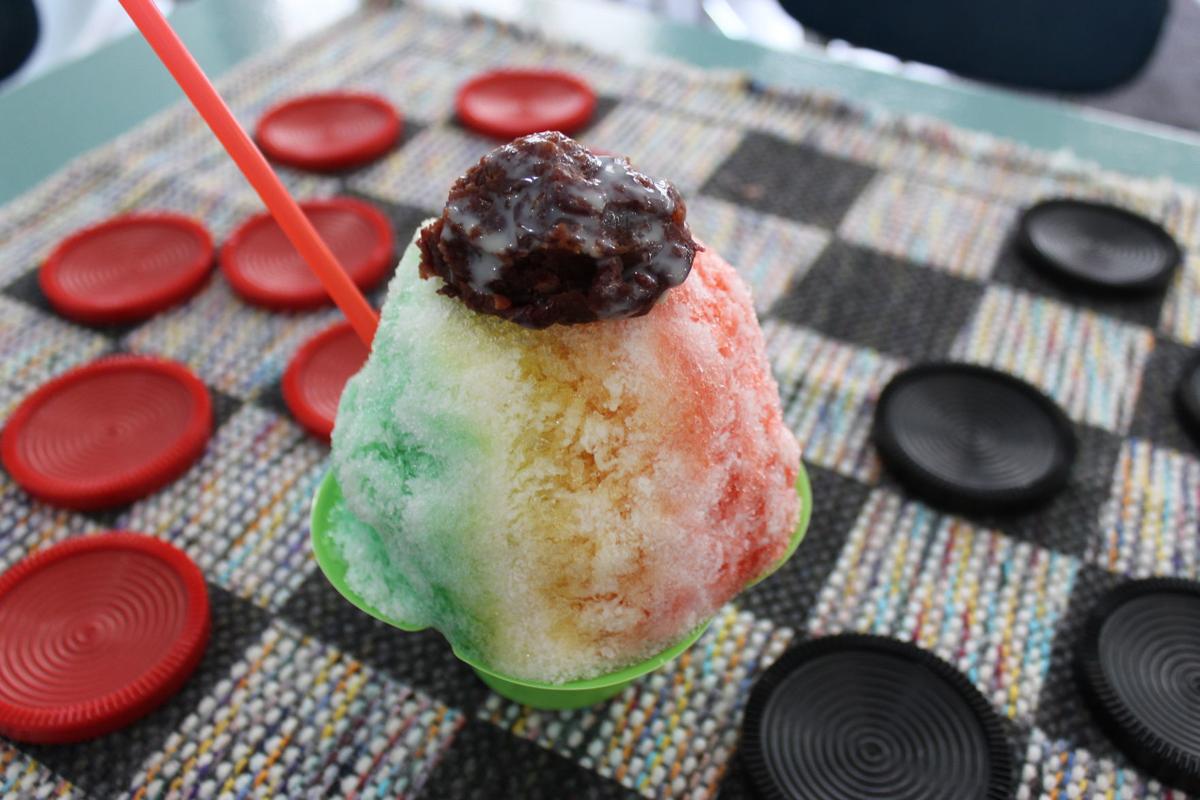 A Hawaiian-style shaved ice at Icki Sticki in Mount Horeb is made with passion fruit, orange and guava syrups, topped with condensed milk and adzuki beans. 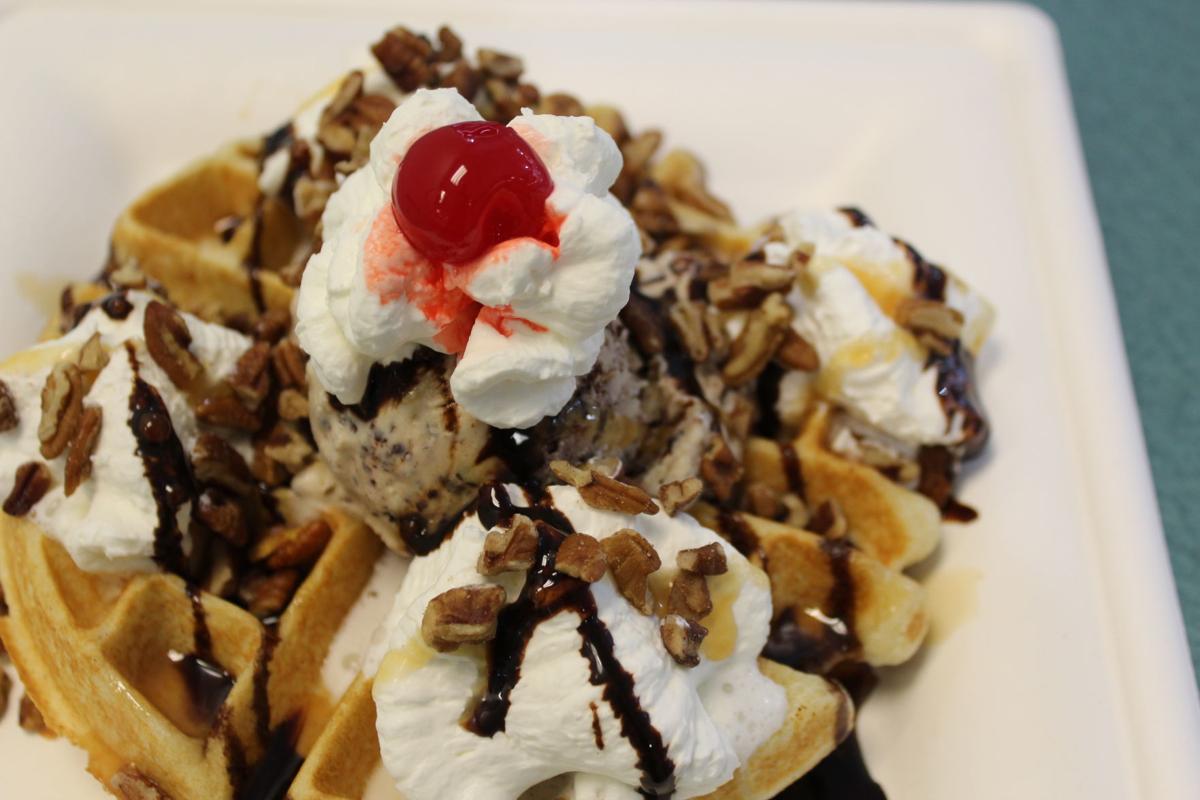 At Icki Sticki in Mount Horebn you can "Build Your Own Belgian" like the one shown here, with This S!@#$ Just Got Serious ice cream from Chocolate Shoppe, chocolate fudge, whipped cream, walnuts and a cherry. 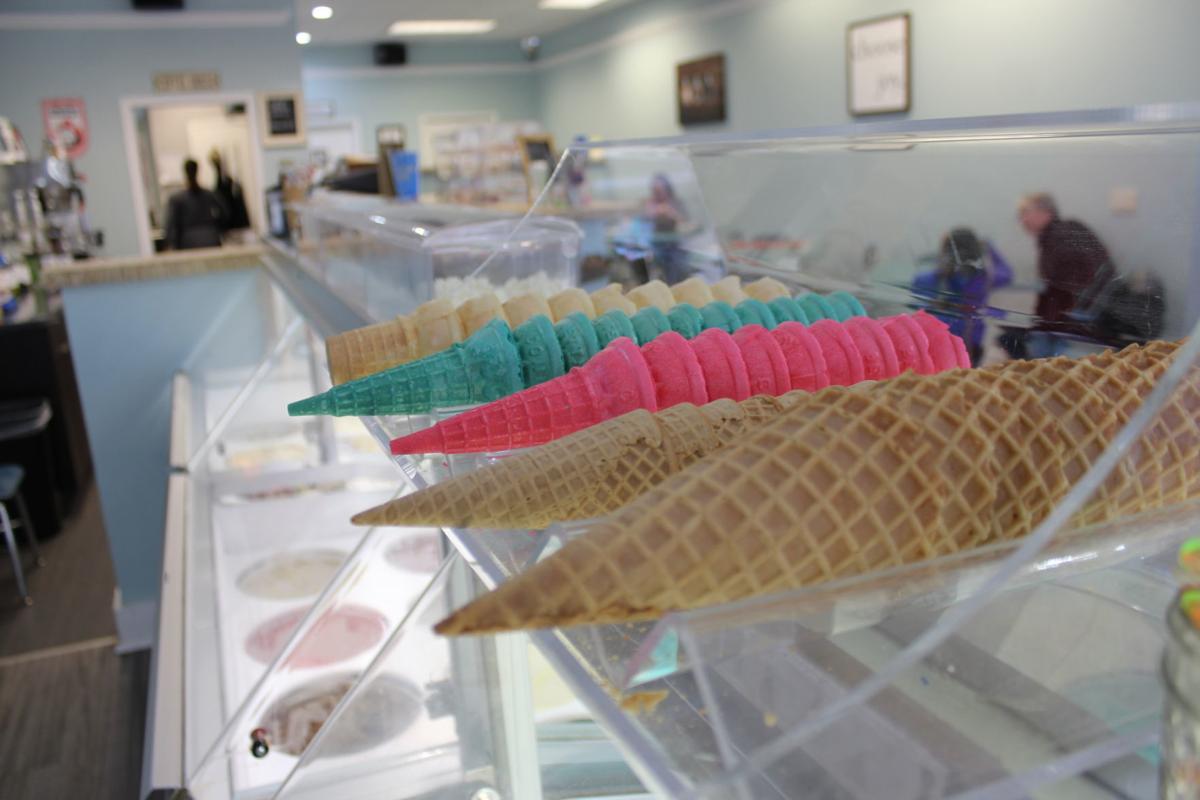 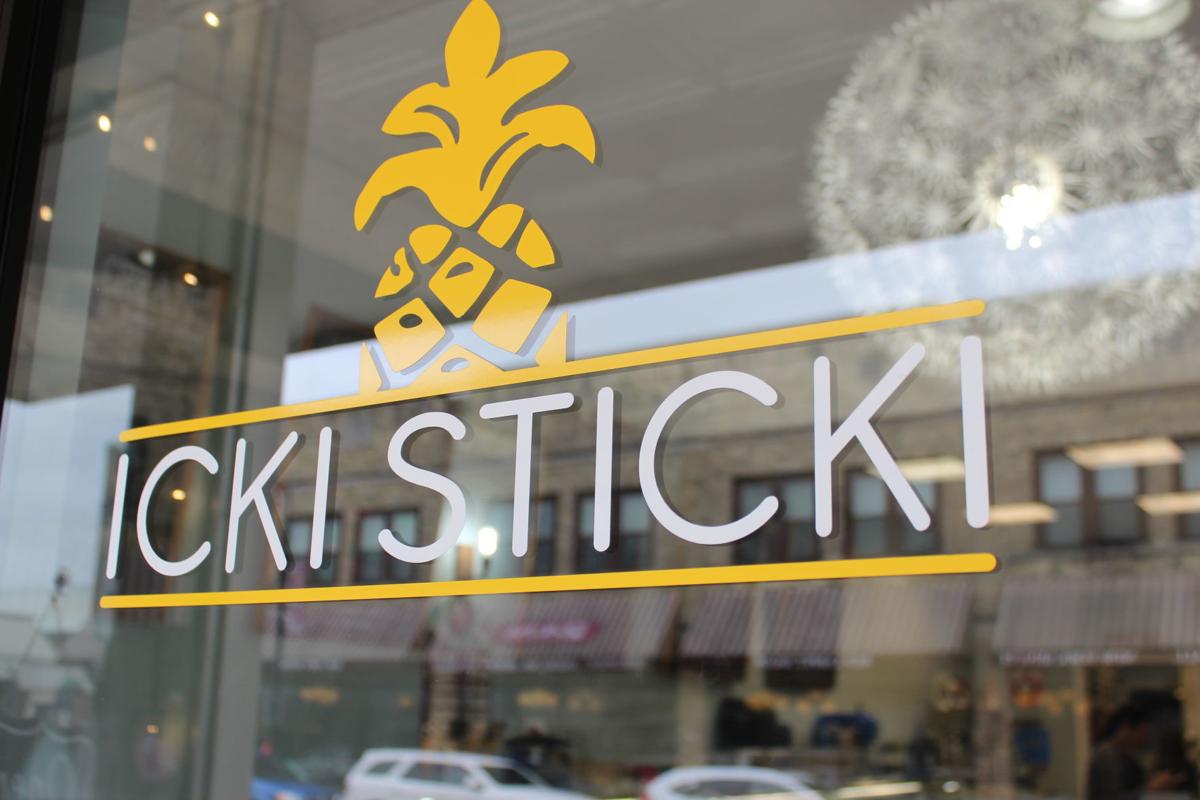 Icki Sticki is a tropical paradise, or as close as it gets here in Wisconsin. Walking into the new ice cream shop in Mount Horeb, it’s difficult to say what catches the eye first — rows of candy toppings, multicolored shaved ice menus, giant woven checkerboards, or dozens of pineapple symbols dispersed throughout the ice cream shop.

“Our whole theme is very laid-back Hawaiian,” said Daniel Jackson, who owns Icki Sticki with his wife, Jessica. “When we were going through design layout, Jess and I said we wanted something that was warm in the winter but cool in the summer. That’s how we came up with this.”

The Jacksons opened Icki Sticki just over four months ago in January. Though it was the middle of winter, the ice cream and shaved ice sold like hotcakes.

“The line was all the way out the door all day,” said Kayla Gilfillan, Icki Sticki’s manager and barista. “This little 5-year-old boy came in and said, ‘Winter is the perfect time to eat ice cream because it doesn’t melt as fast.’ I guess it was the perfect time for everyone.”

With the exception of a Culver’s on the edge of town and Sunn Cafe, before Icki Sticki, Mount Horeb had few family friendly spots open past 2 p.m. The idea for this dessert and coffee shop combo came from Jessica being a stay-at-home mom and having nowhere to replenish her afternoon need for caffeine.

“After 3 o’clock, there’s no where around here to get a cup of coffee, so I would just be walking around with my kids in a stroller looking for a place and only bars were open,” she said. “When you have kids, there needs to be a place where you don’t exclude them.”

Daniel was looking to leave his IT sales job for a gig that would require him to spend less time away from Jessica and their two daughters. To fill the community’s needs as well as their own, the Jacksons settled on a less than conventional idea: a shaved ice shop that was also part coffee house, part ice cream parlor and part waffle house.

“That’s the whole idea behind Icki Sticki,” added Daniel. “To not exclude anyone.”

“One of our customers requested that flavor early on,” said Gilfillan. “Apparently it replenishes your electrolytes. The flavor and color is totally natural and has done surprisingly well with people.”

Icki Sticki’s most popular shaved ice order among customers is the Hawaiian “POG” ($3.50-$4.50) with passion fruit, orange and guava syrup. On top of the ice mound they add a scoop of mashed Japanese adzuki beans and condensed milk. Some Hawaiian stands call this a “snow cap.”

Jessica and Daniel conducted a “shaved ice recon” trip to Hawaii, visiting popular shops such as Matsumoto Shave Ice. The couple has also discovered ways to make the art of shaved ice their own.

“We started adding a scoop of ice cream to the bottom of some of our shaved ice snacks,” said Gilfillan. “It’s a great way to soak up the rest of the syrup that usually just melts to the bottom of the cup.”

While the shaved ice and syrups are made by the Icki Sticki team, the shop has partnered with local JBC Coffee Roasters for their coffee drinks, as well as Chocolate Shoppe Ice Cream Co. who manufactures Icki Sticki’s 32 flavors of ice cream. In addition to serving scoops in malts ($5.50), sundaes ($5.99-$6.99) and hand-dipped cones, Icki Sticki also offers their ice cream a la Belgian.

With both classic and gluten-sensitive waffle options, this shaved ice shop has reinvented the idea of breakfast food. Customers can choose to “Build Your Own Belgian” choosing whatever ice cream and toppings they want to pile onto the waffle, or they can choose from Icki Sticki’s “specialty” options.

The portions at Icki Sticki are large and risk for sticky fingers is inevitable. That’s how the shop got its name.

“Our daughter Blaire loves David Landau’s song Icky Sticky Bubble Gum and whenever she eats something messy she’ll go, ‘Mama look! Icky Sticky!’” said Jessica. “Dan and I looked at each other and thought, ‘What a perfect name.’”

One of the most popular waffle orders is Gilfillan’s own creation, the Maple Overload ($7.75) with maple nut ice cream, maple syrup, walnuts and whipped cream. There’s also the Monkey Business, with nutella and fresh banana slices, and the Tutti Fruity, topped with fresh fruit and whipped cream.

“One time, these two teenage boys came in and ordered two waffles filled with so many toppings each one costed over $10,” said Gilfillan. “I honestly couldn’t tell you what they ordered, but I remember not being able to see the waffle anymore.”

According to HungryBadger’s Nepali-born owners Deepak, Archana and Neelam Shrestha, the secret to a good momo is a juicy filling and an exceptional sauce.