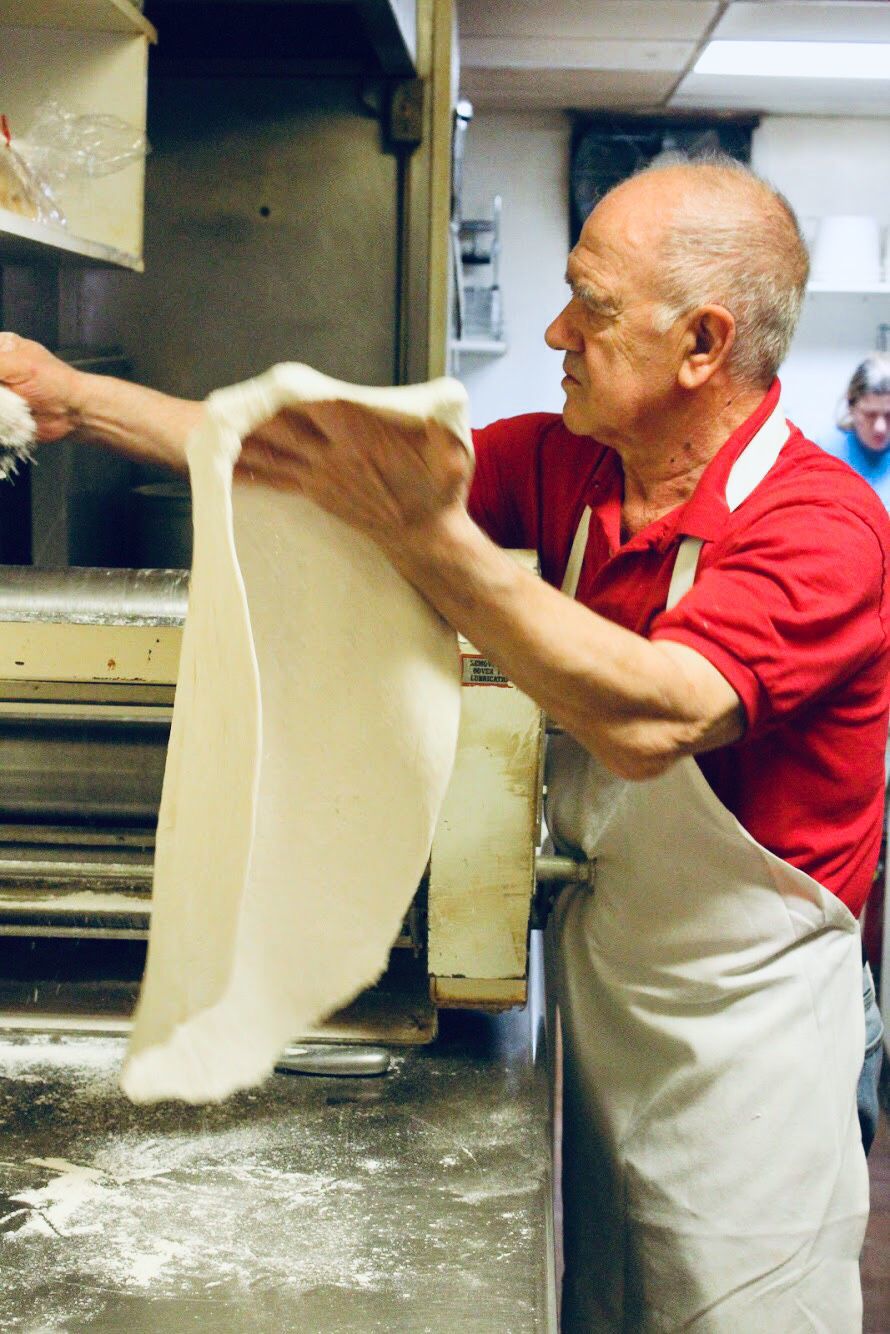 John Indelicato opened Maria's Pizza 40 years ago in Oregon. He's preparing to retire now, having created a family of diners around his own family. 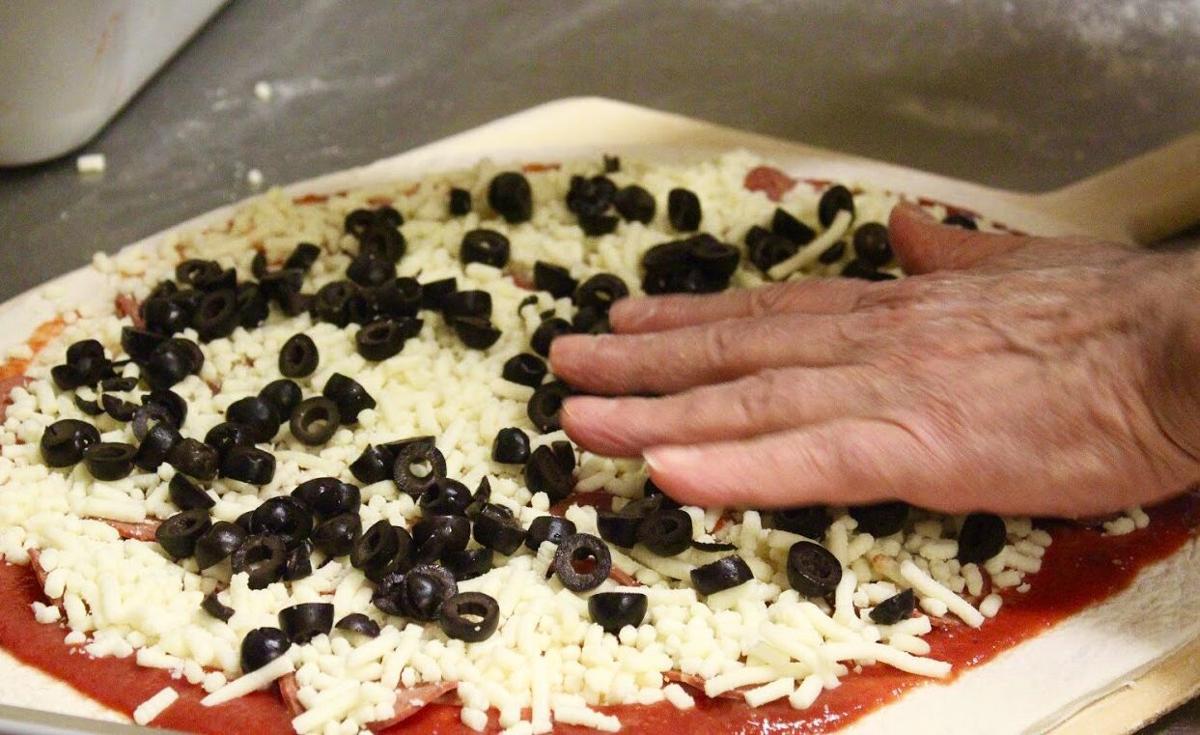 John Indelicato prepares a pizza at Maria's Pizza in Oregon, where most diners make their own combinations. Cheese and pepperoni, he said, are still the most popular orders. 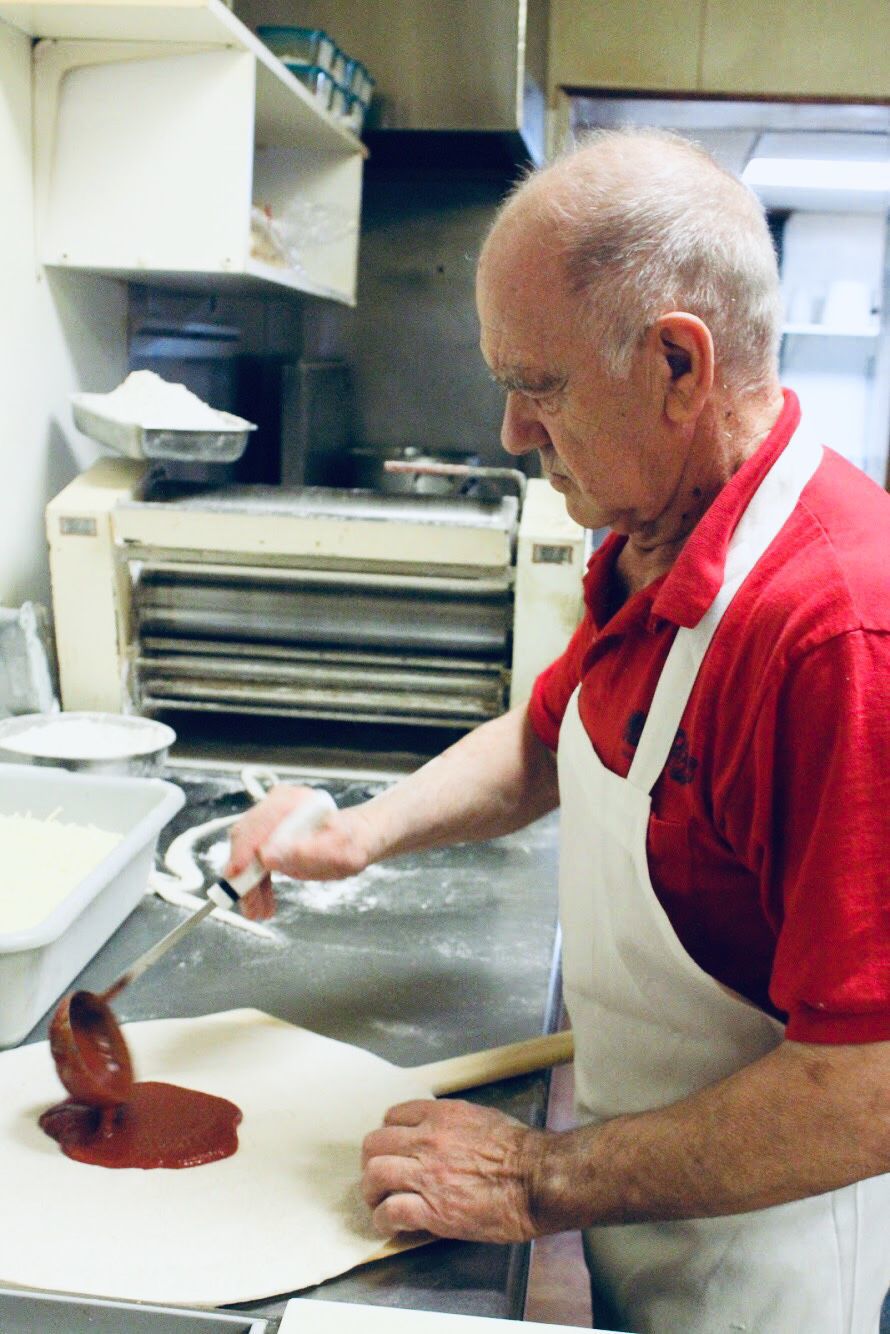 John Indelicato spreads tomato sauce on a pizza at Maria's in Oregon. 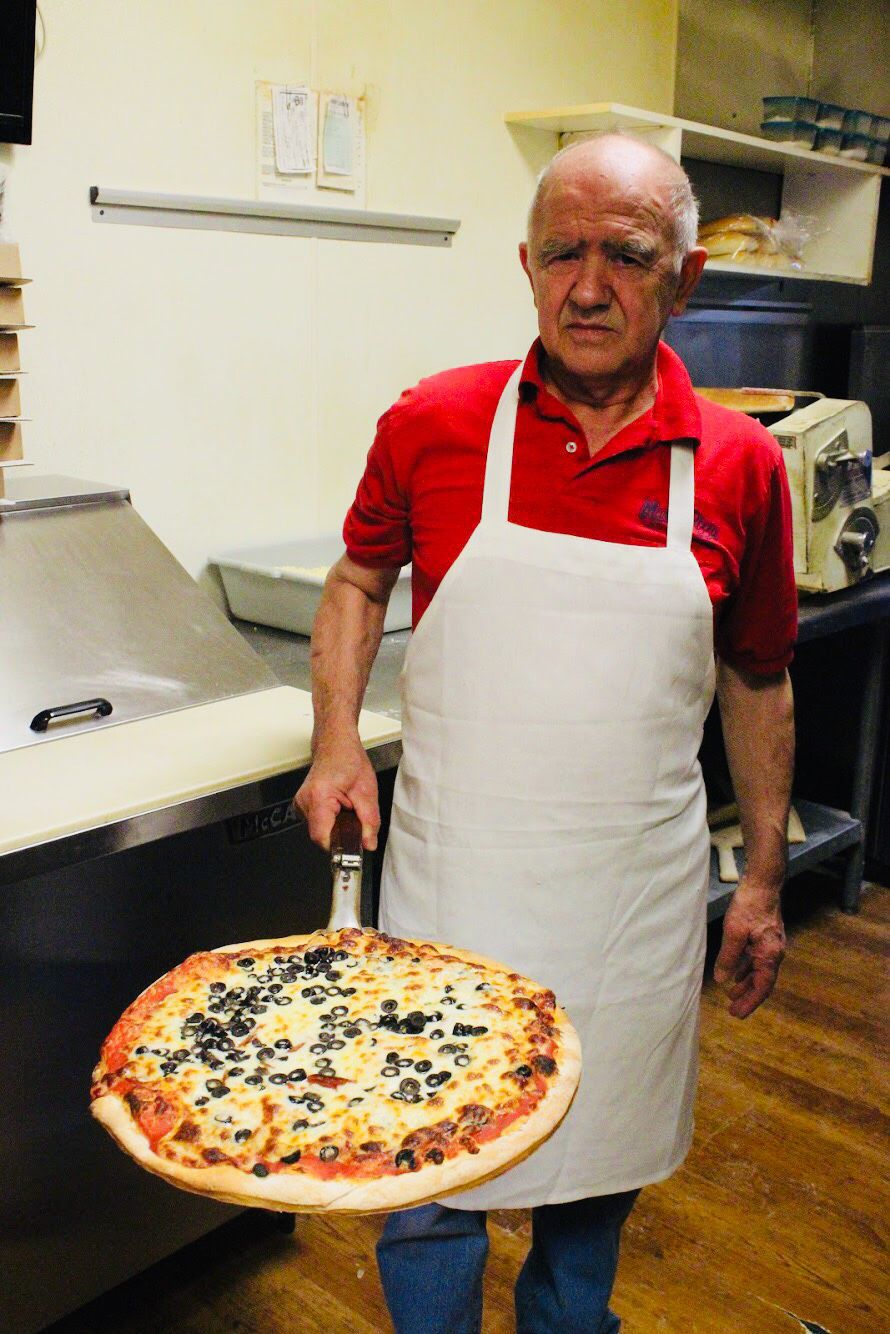 John Indelicato shows off a pizza before putting it in the oven at Maria's Pizza in Oregon. While some diners ask for hearty combinations, like Italian sausage, bacon, onions, and green peppers, Indelicato said the most popular orders are the classic cheese and pepperoni. 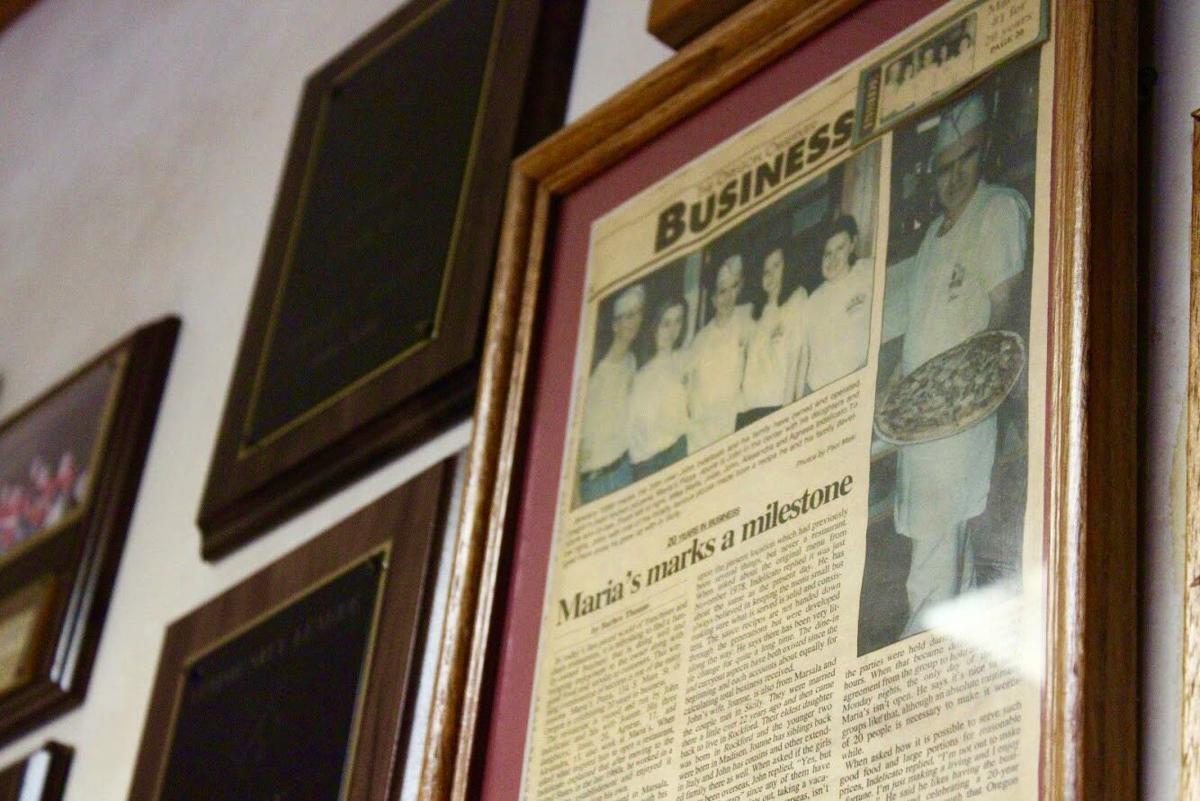 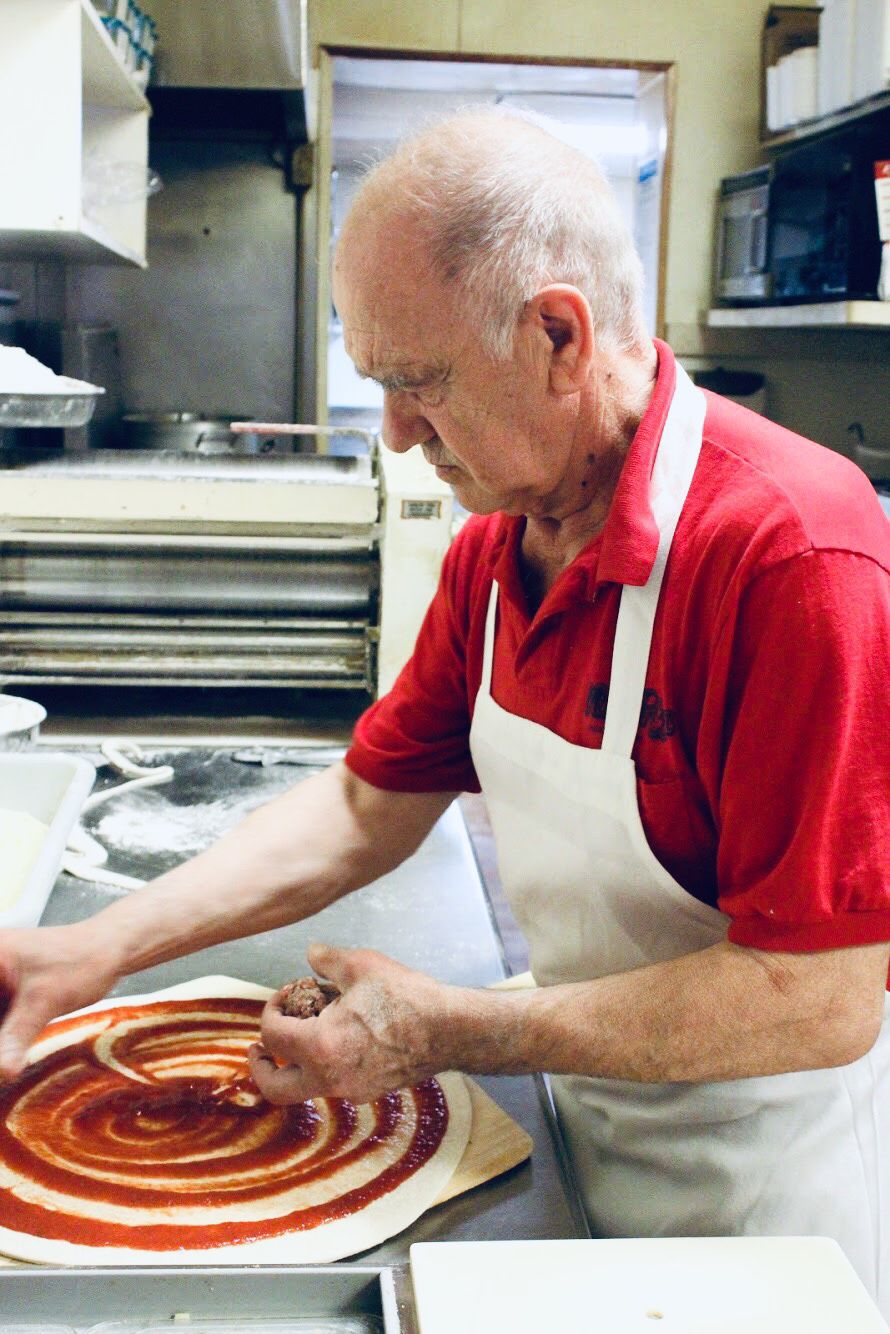 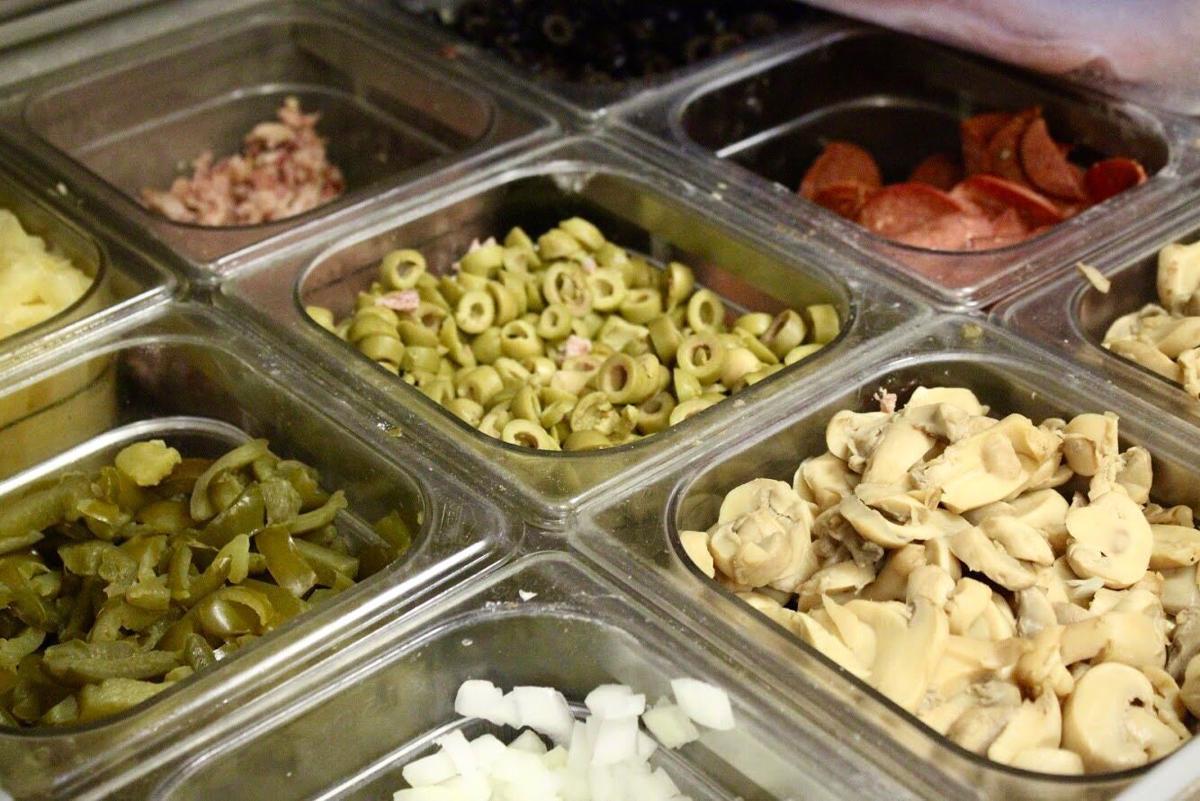 Most diners at Maria's Pizza choose their own combination of toppings, some of which are shown here. 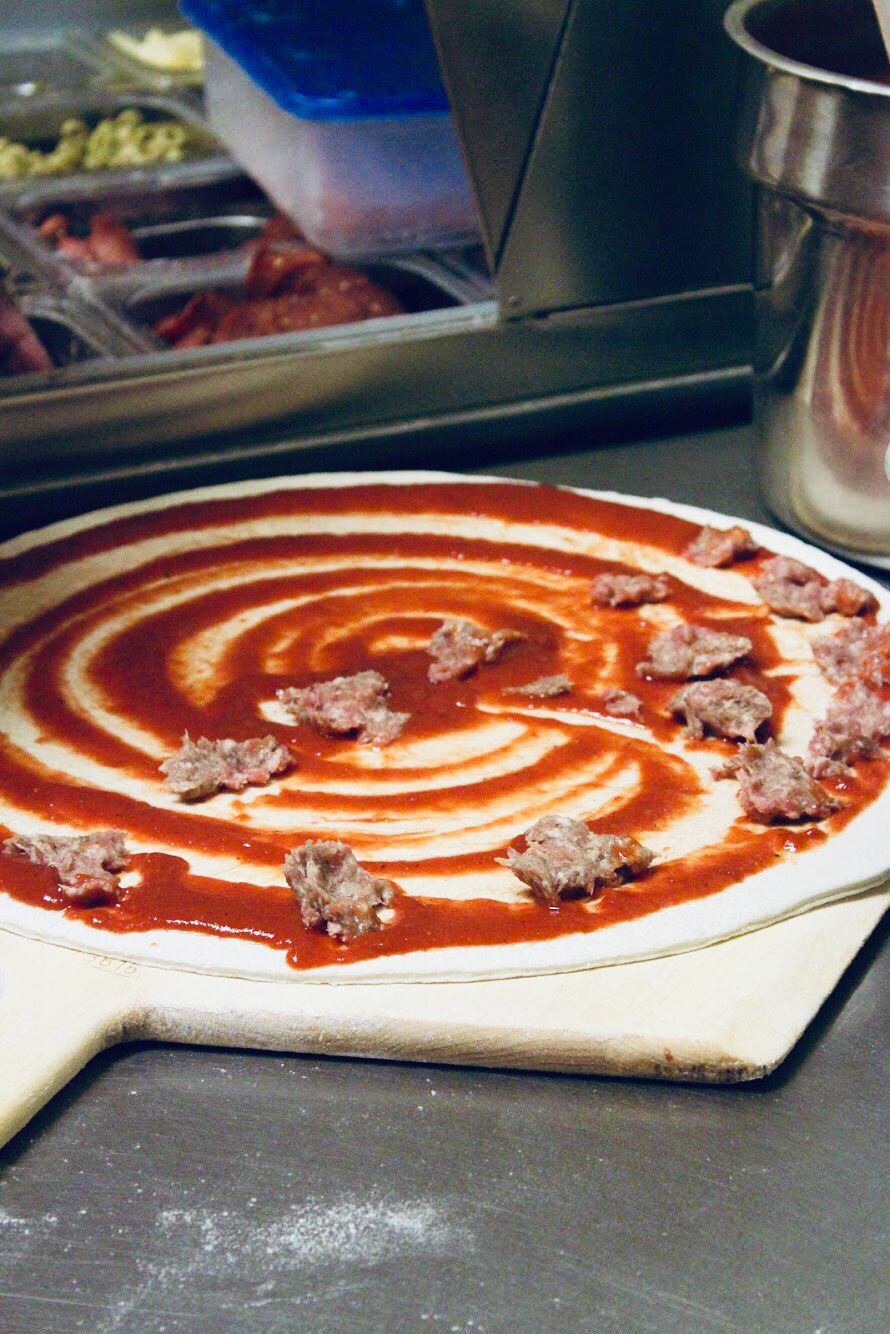 A pizza prepares to be topped and baked at Maria's Pizza. 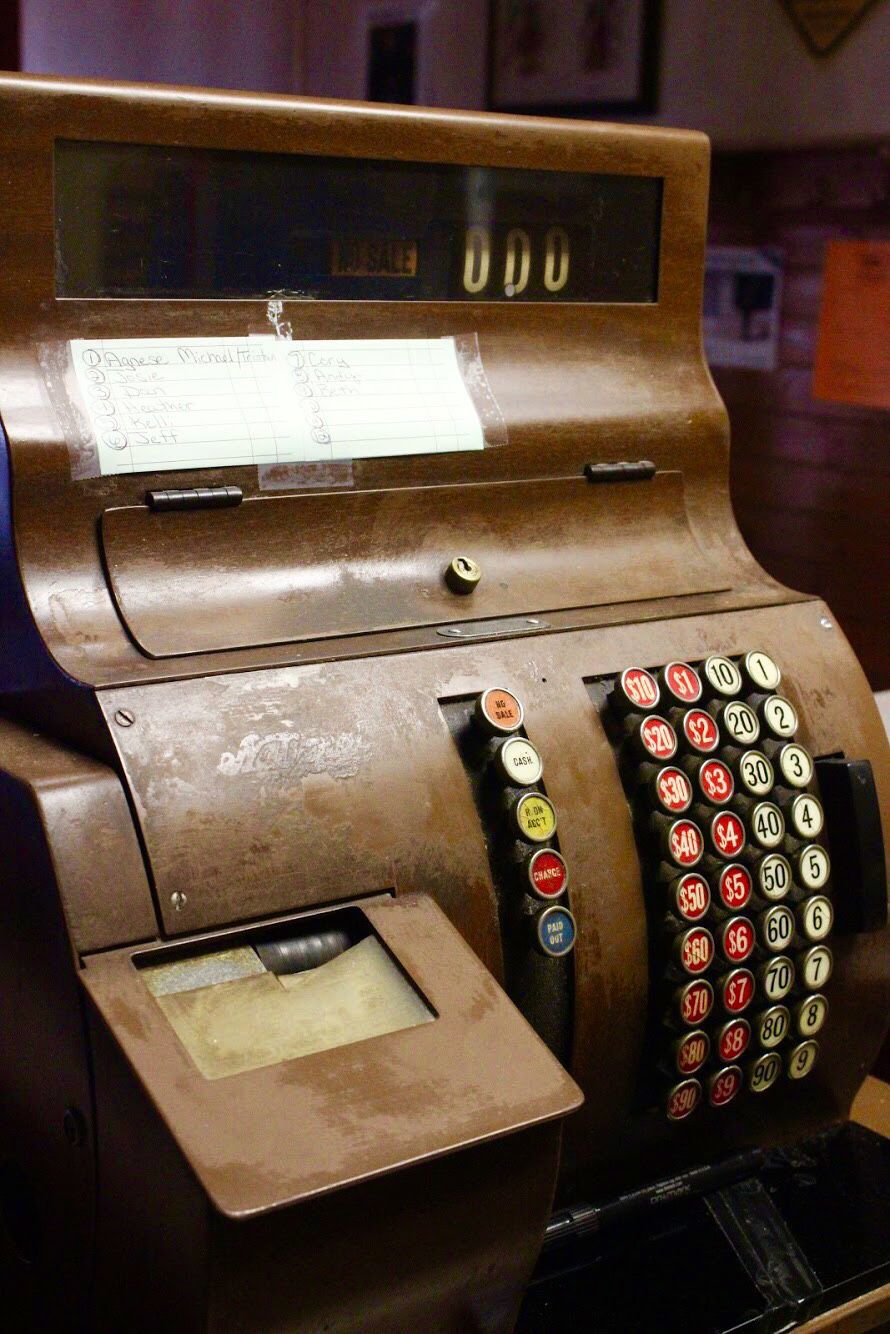 Even the cash register at Maria's is the same as the one John Indelicato bought when he opened the pizzeria in the 1970s. 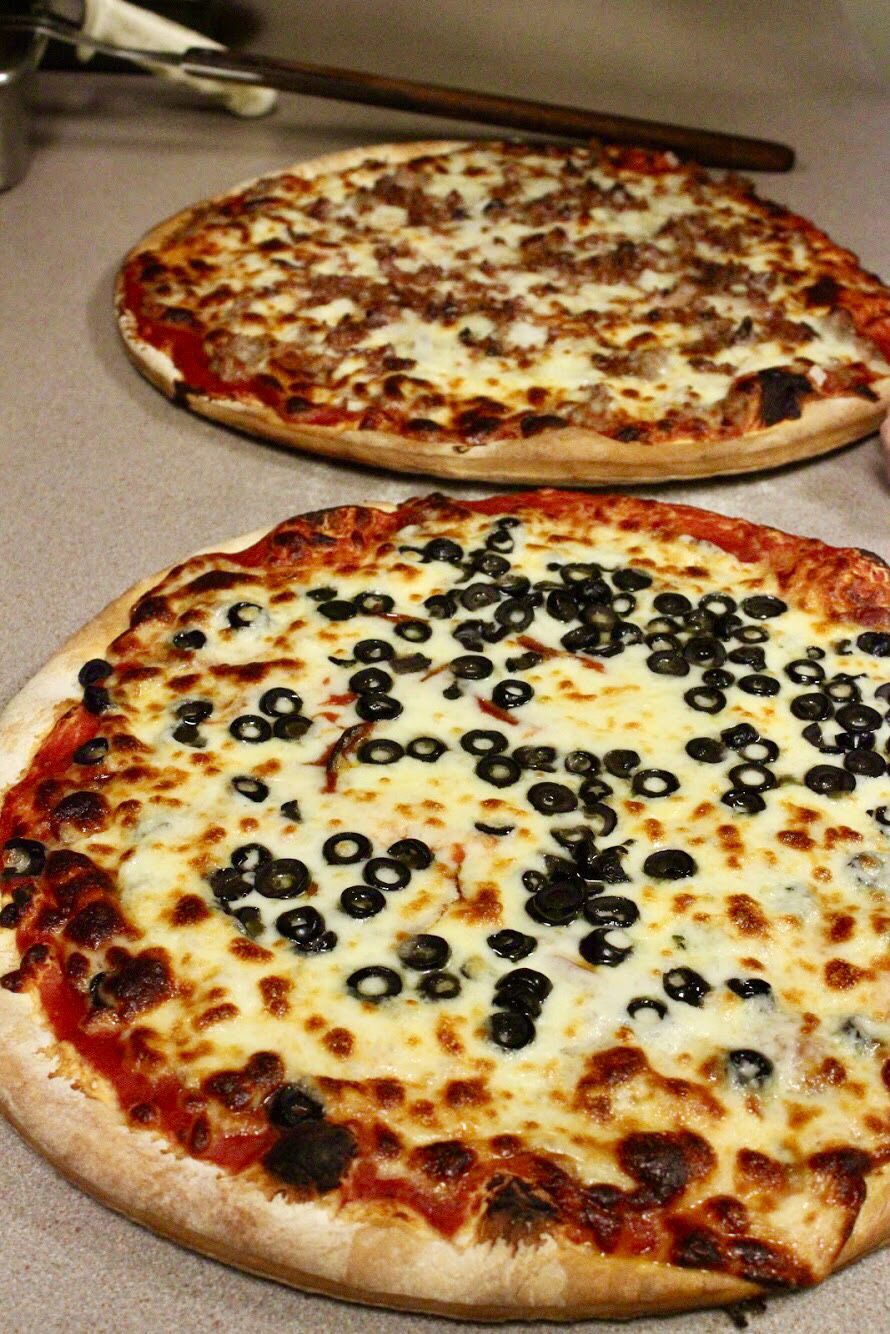 Pizzas at Maria's in Oregon can be topped with a variety of meats and veggies, and most diners choose their own combinations.

John Indelicato opened Maria's Pizza 40 years ago in Oregon. He's preparing to retire now, having created a family of diners around his own family.

John Indelicato spreads tomato sauce on a pizza at Maria's in Oregon.

A pizza prepares to be topped and baked at Maria's Pizza.

Even the cash register at Maria's is the same as the one John Indelicato bought when he opened the pizzeria in the 1970s.

Outside a modest little brick building off South Main Street in Oregon, an Italian flag awning reads “Maria’s Pizza.” Time has stood still for 40 years at this restaurant, with owner John Indelicato having made a point not to change one thing since opening Maria’s in the 1970s. Even the cash register, with the employee names tapped to the front, is the same one Indelicato purchased back in 1978.

“You gotta keep it all the same,” said Indelicato. “If you change something, it’s not the same anymore, there’s no more history. This way, I keep the memories.”

Among maps of Italy that line Maria’s walls are community event awards and family photos. A newspaper clipping from an Oregon News “Know Your Oregon Neighbor” in 1999 features Indelicato tossing pizza dough in the restaurant’s kitchen. Another photo shows Oregon High School’s hockey team from 2005 chowing down on some cheesy bread.

“Those hockey players still come back to visit a lot with their own kids,” said Indelicato. “Sometimes it’s been so long, I don’t recognize who they are. Others are regulars and I even know what pizza they’ll want.

“That’s the good thing about owning a smaller restaurant, you get to know people.”

Indelicato was born and raised in Sicily in a coastal town called Marsala. After moving to the U.S. with his family at the age of 19 for “better work and a better life,” Indelicato had a difficult time getting to know people due to the language barrier.

Since establishing Maria’s, Indelicato has created a family dynamic, not only among his staff, but also with the community.

“Some of my regular customers now used to work for me as kids 40 years ago,” said Indelicato. “Now they grow up, have kids of their own, and they all come in here. Even the ones who live out of town, they always stop in for pizza when they visit.”

Josie and Agnese, two of Indelicato’s three daughters, have worked at the restaurant since they were teenagers. Their mother, Joanne, assists Indelicato with the pizza baking.

The kitchen at Maria’s is almost more like the family’s kitchen, with rosary beads hanging above postcards from John and Joanne’s Italian home and grandbaby photos tucked into the kitchen’s window frames.

“This one is of my daughter and grandson when he was a baby,” said Indelicato holding up the purple and orange-hued photograph. “But he’s now 14, so that tells you how long that picture’s been there.”

Most guests at Maria’s build their own pizzas, requesting any number of meats and veggies for toppings. While some ask for hearty combinations, like Italian sausage, bacon, onions, and green peppers, Indelicato said the most popular orders are the classic cheese and pepperoni.

Still, every pizza place has is own flair when it comes to their cuisine creations and Maria’s is no exception. Under“premium specialties” Maria’s lists a two-crust-layered Pizza Pie ($11) stuffed with salami, ham and Canadian bacon. The Johnny’s Special ($11) combines salty anchovies, onions, tomatoes, parmesan cheese and garlic powder, with no extra pizza blend cheese.

“Pizza is a good business to get into because it’s got everything,” said Indelicato. “It’s got the meat, the veggies, the bread ... and anytime is pizza time.”

Indelicato comes in early to make fresh sauces, as well as clean up from the night before. Despite having roots in the pizza capital of the world, Indelicato says his pizza is not inspired by his Italian birthplace.

“I gotta tell you, last time I went there, we got pizza in two places and I didn’t like it at all,” said Indelicato. “You couldn’t even cut it with a knife. I don’t know what they did to the bread, but I definitely like ours better.”

After pulling the pizzas from the hot oven, Indelicato adds a little oregano for seasoning and some extra parmesan for flavor. As enticing as the steaming sauce and baked bread looks, it’s best not to pick up a slice right away.

“Don’t pick it up yet,” said Indelicato as he set down an extra large pepperoni pie ($12). “You’ll lose all the toppings.”

After being his own boss for 40 years, Indelicato has decided to hang up the apron. Maria’s is currently on the market and while Indelicato is hoping to retire in the next year, he hopes the new owners will choose to keep Maria’s up and running.

“I hope they keep it a pizza place, I really do,” said Indelicato. “I’ll teach them all they want to know about the business we built here.”

No offers have been made on the building yet, so now is the time to visit Maria’s. Take a bite of pizza that has withstood four decades worth of change, proving the classics never go out of style.