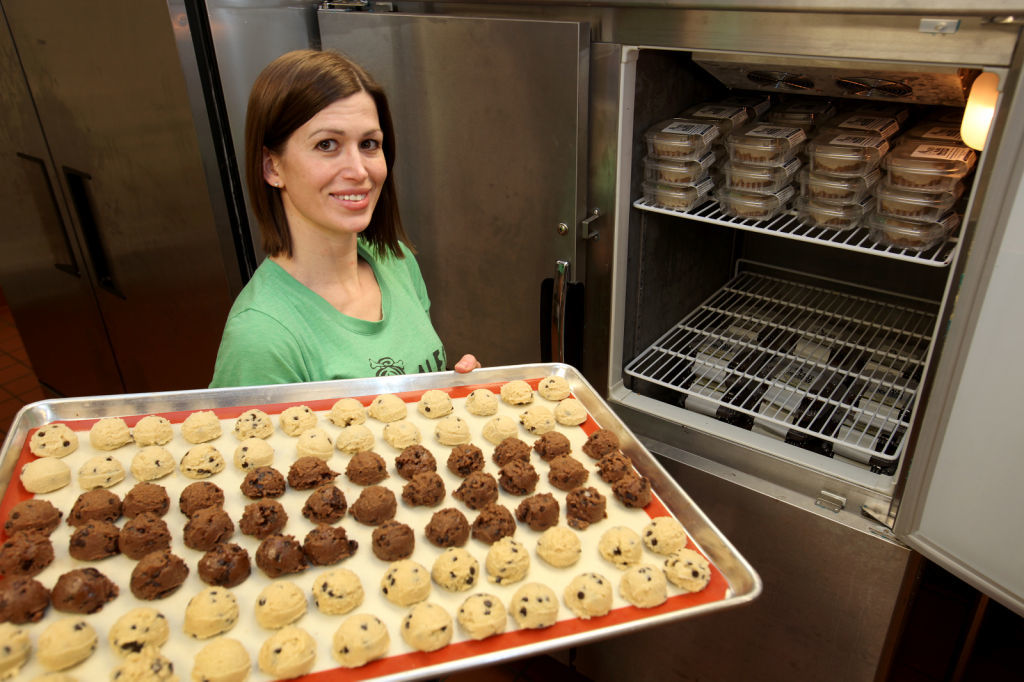 Belle Pleva, founder of Paleo Mama Bakery, readies a sheet of cookie dough to a freezer in kitchen space she rents in Madison. 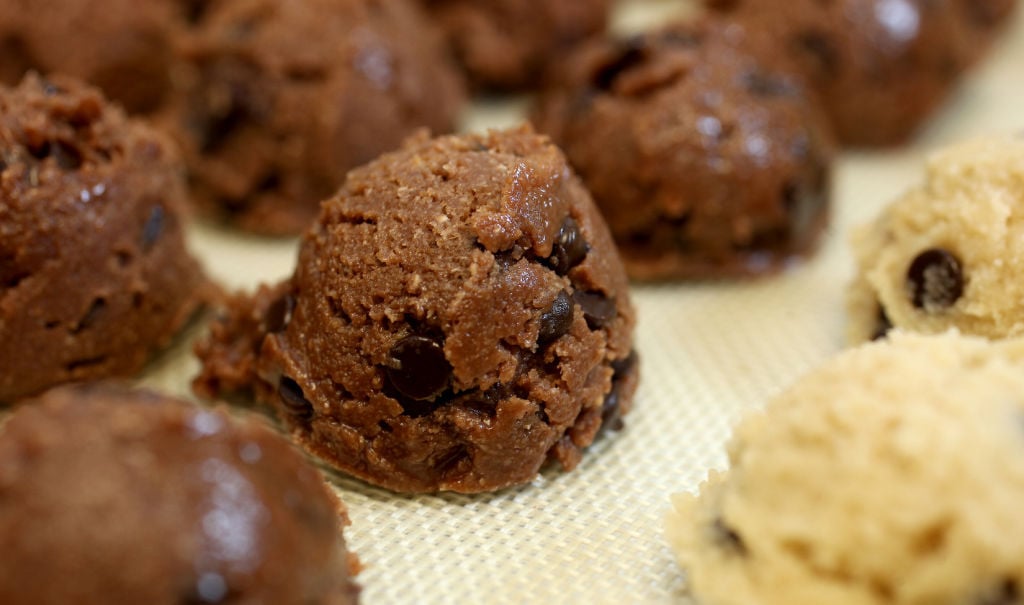 At a new bakery on Madison’s west side, “cheesecake” involves no cheese, and not what most folks would call cake.

These 4 oz., single serving treats are denser than a typical cheesecake, with stronger flavors of coconut and nuts. And for those who can’t have gluten or dairy because of allergies or other restrictions, they’re a godsend.

“I get emails every week from just random people, thanking me for doing this,” Pleva said. “I’m able to help people.”

At Paleo Mama, Pleva, 33, makes baked goods that are grain- and gluten-free. She uses Gentle Breeze Honey from Mt. Horeb as a sweetener and almond flour for delicious graham crackers (also made with applesauce) and “oatmeal” cookies, among other goodies.

The idea for the bakery came to Pleva, a former elementary school teacher, because of a diet she was already on for her own health. Pleva has an autoimmune disease called ulcerative colitis, which she described as similar to Crohn’s disease.

Technically, she’s not Paleo. The Specific Carbohydrate Diet (SCD), Pleva explained, is similar to the Paleo Diet in that it eliminates grains, most dairy, refined sugars and processed foods.

There are some variations, including chocolate (allowed on Paleo but not SCD) and fermented dairy (the opposite).

People on both diets eat primarily fish, vegetables and, in the case of Paleo, grass-fed and pastured meats. Paleo has been called the “caveman” diet, but more importantly to Pleva, it can be responsible for improving gut health.

“Doctors wanted me to try different meds and none of them seemed to help,” she said. “A lot of them made me sicker. So I researched on my own and found that food can have a lot to do with the healing process.”

Pleva has always loved to bake. After her second daughter was born, she took some time off work and began thinking about making a career change.

“First I thought maybe I should just do it on Etsy, small scale,” she said. But “there was really more of a demand for it here in Madison, and there really isn’t much out there that’s Paleo.”

She began testing some of her ideas on friends and neighbors, experimenting with brownie cupcakes and salted caramel cupcakes, both made with coconut milk frosting.

“I had a lot of recipes and I played around with them,” Pleva said. “I started with a lot more than I have now, and I had people test them out for me.

“I figured if I had people who were not Paleo eaters and they liked them, the Paleo community would like them even more.”

Egg-free chocolate chip cookie dough was a big hit, in part because it’s safe to eat raw. She has expanded that line, with almond coconut and chocolate cherry dough. (Enough dough for 12 cookies costs $12.99.)

So far, the response has been encouraging, and not just from those on restricted diets. Many of Paleo Mama’s biggest fans simply like the idea of a healthier alternative to refined sugar sweets.

“The chocolate chip cookies are awesome!” raved one woman on Paleo Mama’s Facebook page. “The coconut flavor is why they remind me of Carmel deLites, but much better.”

Though coconut, a somewhat divisive flavor, is present in many of Pleva’s desserts, she said it’s not always easy to tell.

“The only one people notice it in are my chocolate chip cookies,” she said, which have coconut flour in them too. “My mother-in-law hates coconut — she hates the texture, she hates the flavor, everything about it. And she loves every single one of my products.”

The bakery itself, located inside a rented kitchen off of Enterprise Lane, is not open to the public. But Paleo Mama Bakery products can be ordered online, either directly from the website or through a new “online farmers’ market” delivery service called Square Harvest.

Many of Pleva’s products, which range in price from $5.99 to $12.99, are available at both Willy Street Co-op locations, the Westgate and Fitchburg Hy-Vee grocery stores and Madison Fresh Market.

For now, Pleva is Paleo Mama Bakery’s sole employee. To introduce people to her products, she’s doing a lot of demos at grocery stores and wellness expos.

“Right now it’s just manageable by myself,” she said.

This summer, she’s hoping to get a spot at the Hilldale Farmers’ Market. She’s also been negotiating with Whole Foods for several months.

Pleva is working on some more cheesecake flavors, including lemon and lemon raspberry. She takes special orders with 48 hours notice.

“I find that I’m getting a lot of people who aren’t Paleo, who are gluten-free or have food sensitivities or allergies,” she said. “They just can’t find products that meet all their dietary concerns.”

That’s why Paleo Mama Bakery is, for Pleva, more than a business. It’s a passion project.

“To me it’s more rewarding,” Pleva said, compared to what she was doing before. The Paleo Diet “is becoming more popular with celebrities.

“But I think most people who follow Paleo do it for health reasons ... to eat more whole, natural foods. They just want to eat healthier.”  

The west side gluten-free baker has been turning out big batches of cookies and cakes with just a hand mixer and a counter top oven.

Belle Pleva, founder of Paleo Mama Bakery, readies a sheet of cookie dough to a freezer in kitchen space she rents in Madison.