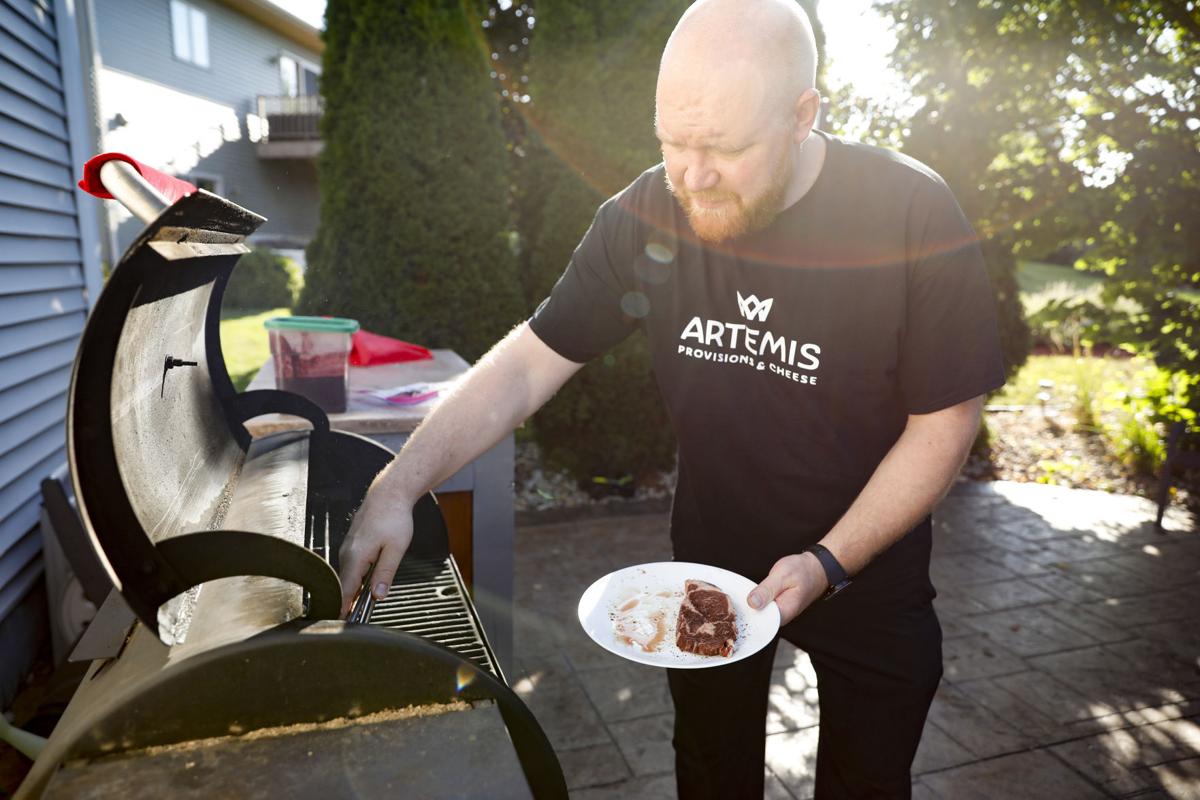 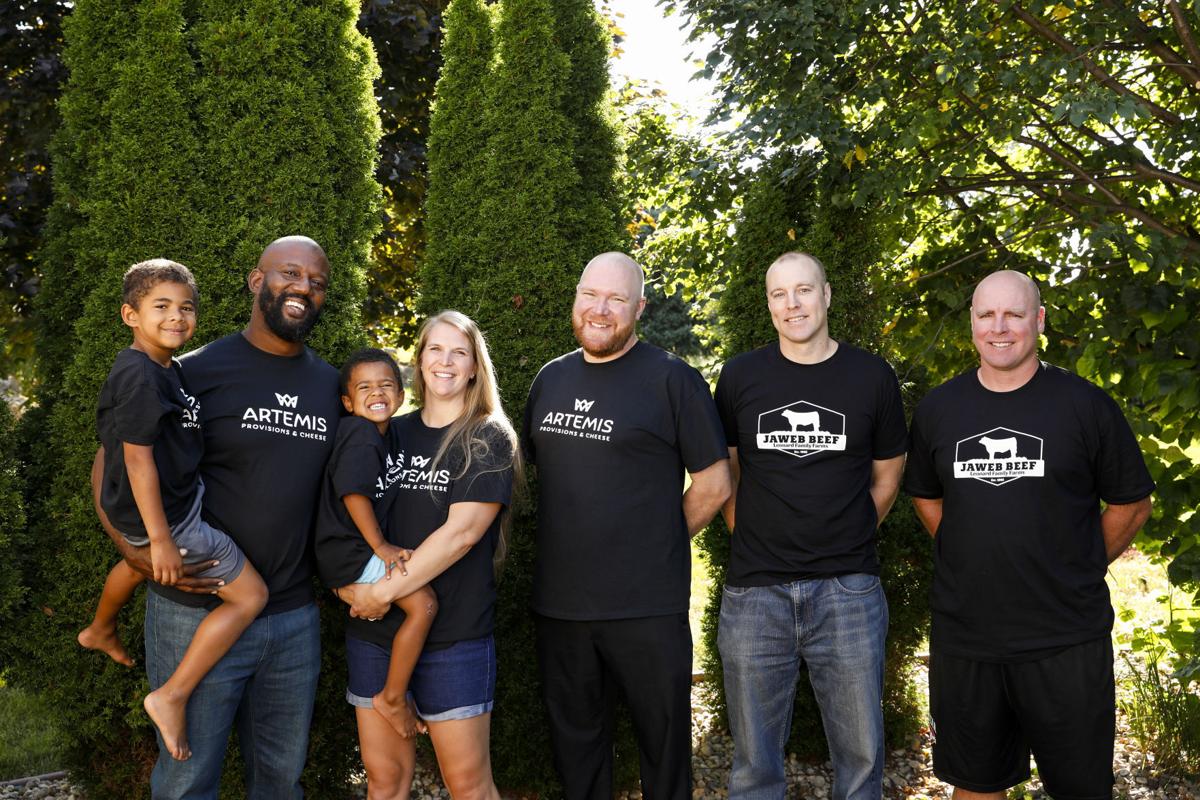 Kingsley Gobourne is no stranger to the tight-knit community of Wisconsin’s meat and dairy farms. Having inherited a love for cooking and “just eating food” from his mother, Gobourne moved from Jamaica to Blanchardville while he was still in elementary school. There he became fast friends with Justin, Jared and Jason Leonard, sons of Gary Leonard of Leonard Family Farms.

“I remember showing up in third grade hearing about a great birthday party that Jason had where he ran his brother over with a snowmobile,” said Gobourne. “My goal for all of the next year was like, ‘How can I get there? I want to be a part of that.’”

Gobourne’s mother had a green thumb, growing callaloo (leafy greens) and hot peppers for Jamaican dishes like oxtail stew and chicken foot soup in her own backyard. But Gobourne’s first introduction to farming began with the Leonards and various dairy farm jobs during his teens.

Artemis Provisions, Gobourne’s new meat, eggs and cheese delivery service, supports some of the same farms Gobourne grew up working for. That includes the Leonard brothers, who Gobourne says have been “like brothers to me” for decades.

“We’re a family and it’s been a great opportunity for us as a group to provide meat that’s high quality to people living in Madison,” said Justin Leonard. “Kingsley’s giving them more options, teaching them how to eat properly and get the hang of recipes, too.”

Oxtail and chicken foot soup are just a few of the foods Gobourne wants Wisconsinites to cook facilitated by his new business, which he named for the Greek deity Artemis, goddess of the hunt. He started it just three months ago during the COVID-19 pandemic and based operations out of his own kitchen.

“We actually started with a pilot for the business at Meriter Clinic,” said Gobourne, who’s also the manager of Meriter Hospitals’ Diversity, Equity and Inclusion program. “I approached our wellness team and asked, ‘Hey, would anyone be interested in purchasing these types of products from these family-owned farms?’ We had a really positive response from that. We continue to offer a special delivery to that clinic for those individuals that still order on a regular basis.”

Artemis works with family-owned farms such as Brunkow Cheese in Darlington, Pecatonica Valley Farms in Hollandale, and, of course, Leonard Family Farms, also in Hollandale. Gobourne wants to make quality proteins more available to the public. He also aims to introduce folks to new cultures and cooking styles through specifically developed recipes, while encouraging home cooking and a stronger connection to where food comes from.

Proteins by the pound

To the general public, Artemis sells boxes of frozen meat and fresh eggs, packaged with recipe cards from his wife, Melissa. There are seven meat packages ranging from $65-$150 available through the Artemis website. All include three or more types of meat provisions.

Customers can add on Pecatonica Farm eggs ($4/dozen) or place custom orders for things like oxtail. The recipe sheets included with each order have been inspired by Gobourne’s own Jamaican family recipes and developed with Eric Benedict, a chef at University of Wisconsin-Madison Culinary Arts. Benedict, Gobourne’s longtime friend and former Badger football teammate, developed recipes like ribs with blueberry barbecue sauce and chorizo breakfast burritos.

“The access to these luxury-like foods that are so good is one part of it,” said Benedict, who grew up on a dairy farm in Taylor. “Knowing how to use them and how to make the best out of them is the other part.

“Putting the proteins and recipes together and really giving customers the power to make these meals on their own is so important.”

The Leonards said when the COVID-19 pandemic came to Wisconsin, “the markets tanked.” Justin Leonard had the idea to start selling directly to consumers, which is when they reached out to Gobourne.

“You can go to Walmart and buy an $8 burger right now, but you don't know if it's coming from a 12-year-old cow,” Justin Leonard said. “I think people are starting to realize there’s a problem.

“I got a 180-degree picture from a friend’s iPhone in Minnesota of a steer processing facility,” he said. “The whole hillside was feedlots of steers. These cattle are just sitting on concrete being fed grain, and it feels ridiculous to look at. Our farm is not a big operation, but we care about our animals. Our dad saved our herd bull Lucky from a snowstorm when he was a calf by putting him in a hot bath in our own bathtub. These animals aren’t a number to us.”

Gobourne said big factory farms create widespread misconceptions about how meat is supposed to be produced as well as the quality of the meat itself. His hope is that Artemis can begin to normalize top-tier meat and eggs, making them accessible to more families — and help more family farms.

“Jason, Justin, Eric and I, we’re all family and we all have a common goal to achieve a better opportunity for our kids, a better food system that works for everyone and is fair,” said Gobourne. “Growing up, with my father being in Jamaica, these guys’ dads are the dads I grew up with.

“It's just a really cool relationship and to be partnering together on this now is awesome,” he added. “Getting to support them in return for supporting me all these years and providing this education to my own children has been a cool journey, and we’re only a few months in.”

Gobourne said building the business of Artemis with his friends, his wife and two sons has taught him valuable lessons about the importance of being closer to sources of food.

“With Artemis, I want to make sure that the people that I’ve had relationships with my whole life can be successful, because they’ve made those type of investments in me as well,” Gobourne said. “To see those places shrink now because they can't compete with larger farms is heartbreaking.”

Plain Talk: The mother of all false equivalencies

Artemis is a meat, eggs and cheese delivery service that works with family-owned farms such as Brunkow Cheese in Darlington and Pecatonica Val…

After decades of cooking for community functions, Nisa Carter and her family have made their food cart dreams a reality at Sista's Chicken & Fish food cart.

The event will run from Aug. 16 through Aug. 23, featuring over 30 Black-owned restaurants, caterers, bakeries, and specialty stores in Dane County.

The Corner Table is a podcast about food and drink in Madison. This week, we talk with Tom Dufek of Plain Spoke Cocktail Co. and Young Blood Brewing Co.

Pick-up picnics, virtual brands: This is dining in a pandemic

This is what a new food business looks like during a pandemic: fewer staff, a focus on takeout/delivery and ingredient crossover. Some are even virtual. 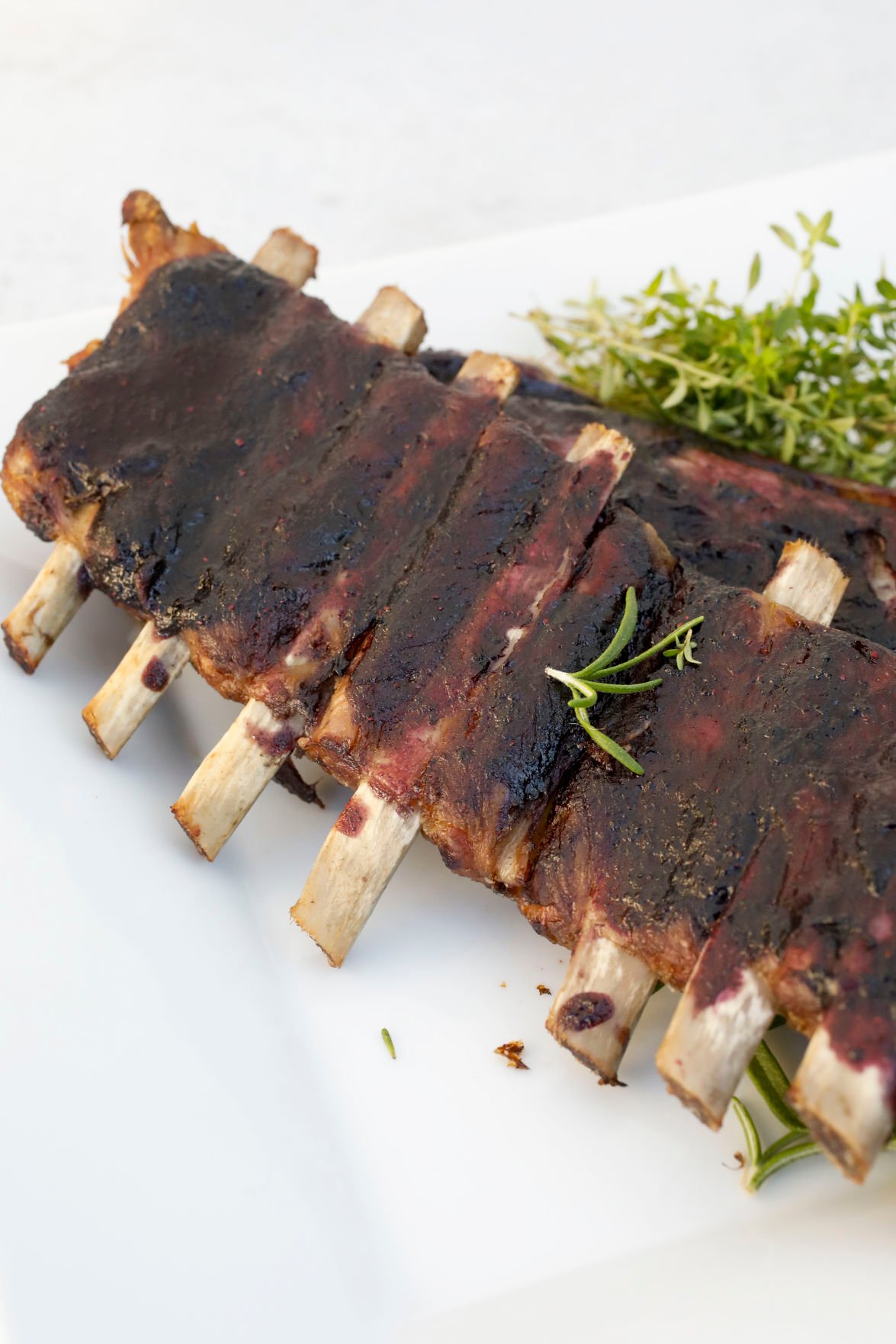 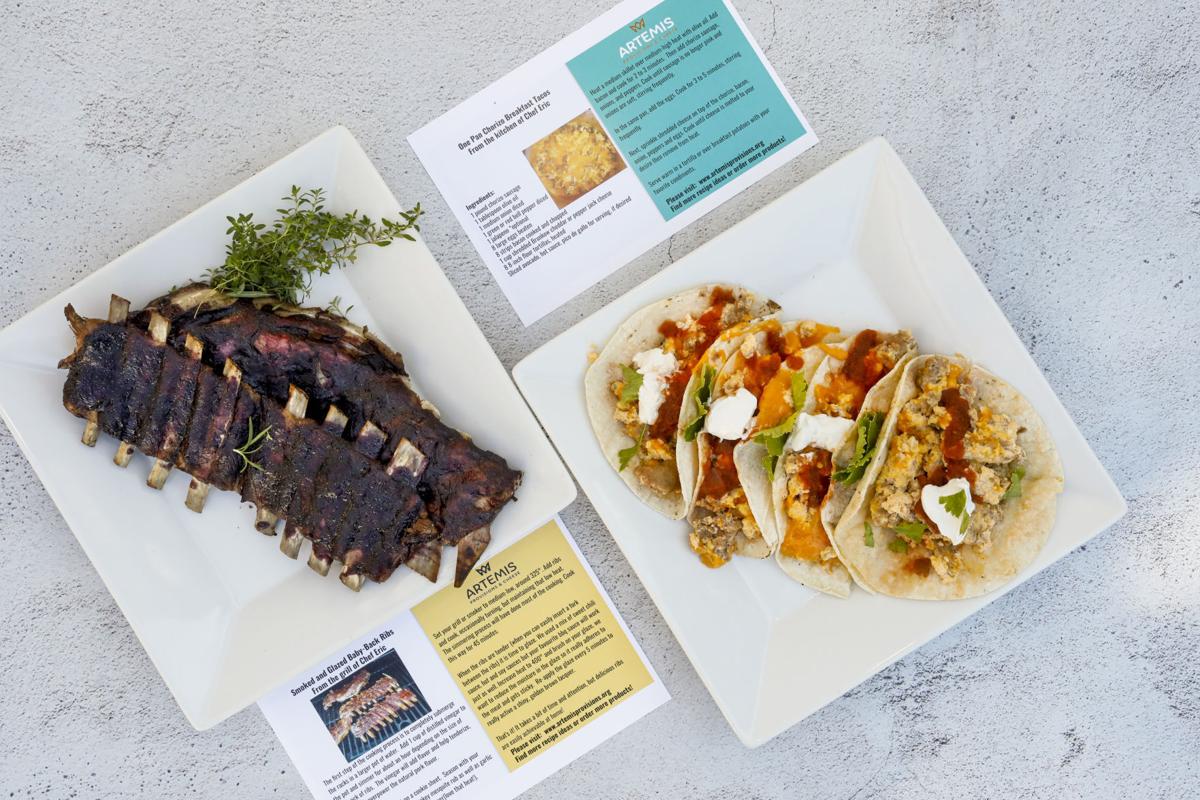 Artemis Provisions and Cheese includes recipes in its boxes for dishes like, from left, blueberry glazed baby back ribs and chorizo breakfast tacos. 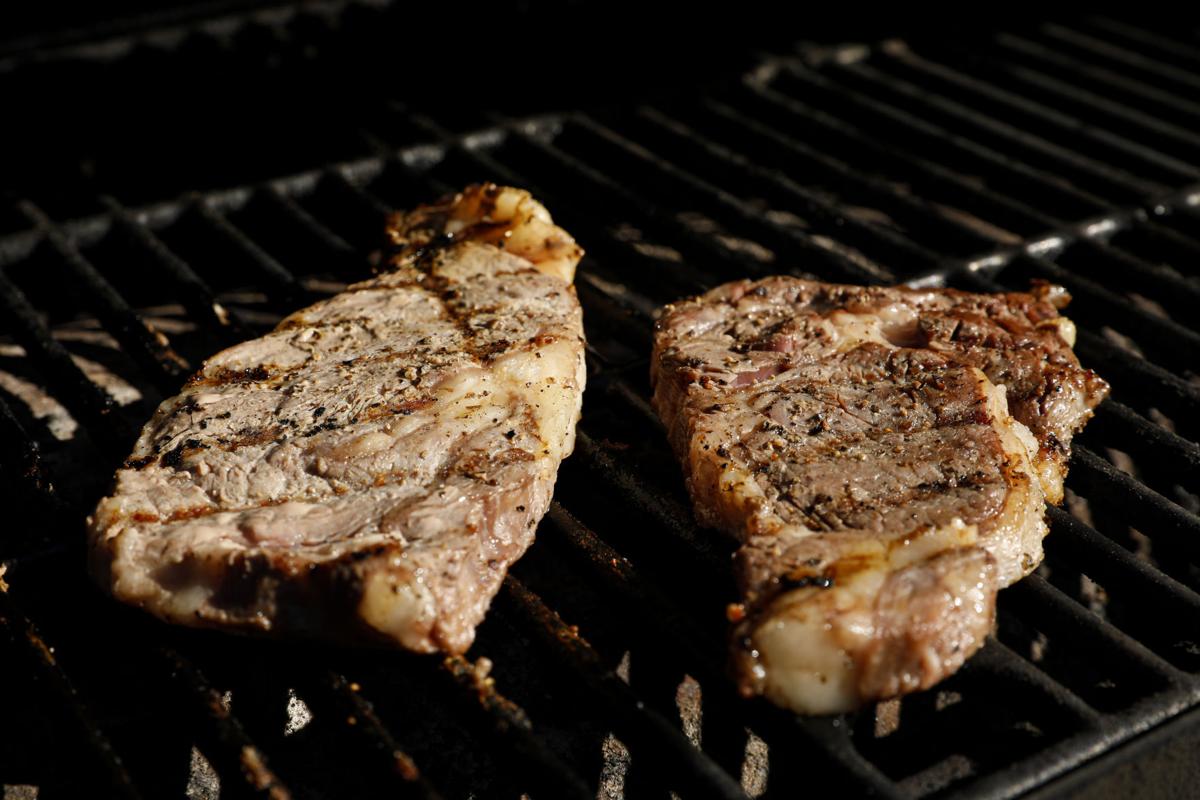 Steaks cook on the grill at the Mount Horeb home of Artemis Provisions and Cheese business owner Kingsley Gobourne. Artemis is a meat, eggs and cheese delivery service that works with family-owned farms.