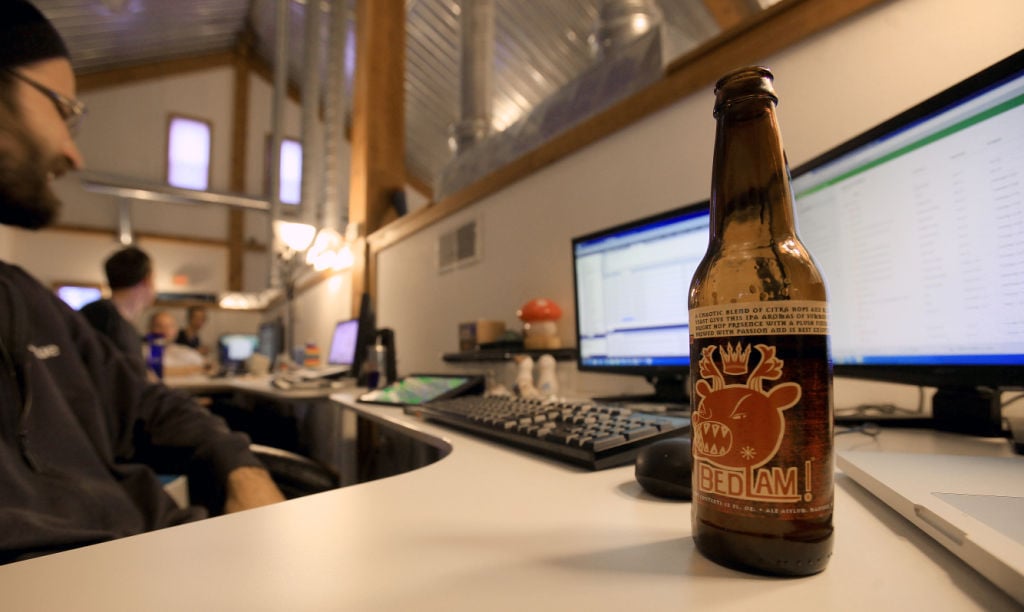 PerBlue is one of several local startups that allow employees to enjoy a brew while on the job. 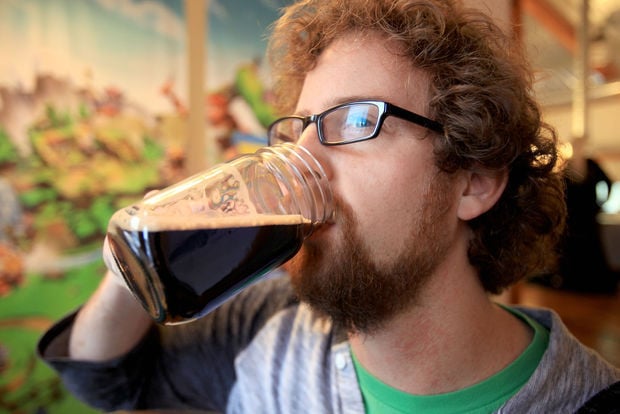 Forrest Woolworth, PerBlue's COO, says employees drink during the day and sometimes stay after-hours to hang out and play board games or foosball in the office

Madison startups are all about that beer.

Well, OK, they’re primarily about social apps or video games or music streaming or a whole host of other things. But it’s the beer flowing in their office kitchens that binds them together.

I visited the offices of PerBlue, a mobile gaming company launched in Madison in 2008, earlier this month. In their kitchen, leaning against a cabinet stocked with ramen and Clif Bars, I chatted with their COO, Forrest Woolworth. As we talked, an employee came in to grab a beer. The small beer fridge had brews from Ale Asylum and Capital Brewery and New Glarus (as well as a few PBRs).

The guy grabbed his beer, popped off the cap and said, “It IS Friday!” with a laugh, then headed back to his desk.

At work. At his job.

“I think having beer in the office is more about the principle of the thing,” Woolworth said.

He said it’s a “cool perk,” for sure, but it’s also about showing your employees you trust them.

“Our employees are spending a lot of time at the office and spending a lot of time working – it’s important to create an environment where they can also have fun,” said Brian Jensen, CEO and founder of Fishidy, a map-based social network for fishing enthusiasts. “I think that’s different and better in the startup world. I think we’re much more conscious of the workplace environment.”

Fishidy also has a beer fridge in the office, stocked with local microbrews (“We like to keep it local,” Jensen said) from Wisconsin Brewing Company, MobCraft, and others.

Booze in the office isn’t that uncommon for startups. Facebook had beer (and employees did keg stands) in its offices in 2005, and companies like Foursquare, Warby Parker, and Tumblr are known to let employees imbibe.

But the relationship between beer and startups is different in Madison.

The craft beer community here is young, vibrant and growing up right alongside startups, which has led to bonding between brewers and entrepreneurs.

“The two are closely tied together — there’s kind of a craft beer geekiness that pairs well with software geekiness,” said Matt Younkle, co-founder and CEO of Murfie.com, an online music marketplace.

Brewers and entrepreneurs in Madison know each other. They rub elbows at professional events and hang out as friends afterward.

Henry Schwartz, CEO of MobCraft, a crowdsourcing-centric brewery founded in Madison in 2012, calls the blended group “a density of cool people.”

MobCraft has made custom beers for PerBlue (“Apollo Ale,” named after the main character in their latest game), software company Bendyworks (“Digitale,” a cream ale), and is currently working on a still-unnamed peanut butter stout for Fishidy.

“We’re mostly doing it because it’s fun for us,” said Schwartz. “The camaraderie between startups is the best.”

Having beer in the office doesn’t mean that employees are throwing back cold ones every Monday afternoon. There aren’t any beer pong tables (though there was a foosball table at PerBlue). Nobody’s channeling John Belushi in “Animal House” between meetings.

“If I have a beer in the middle of the day, I’m going to fall asleep,” Schwartz joked.

“It’s not back to the ‘good old days’ of breweries at lunchtime,” Younkle said.

And some employees don’t even like beer, Woolworth pointed out. For them, PerBlue also has a cocktail station. (Mostly for Old Fashioneds. It is Wisconsin, after all.)

But for the beer-inclined majority, the brews – mostly local, brewed by their friends and colleagues – will keep flowing at Madison startups.

It’s fuel for the developer’s creative spirit and salve for the executive’s frayed nerves.

With an eye on the bottom line, it’s bottoms up. Cheers, Madison!  

White joined The Capital Times in 2014, where she covers a variety of beats, including music, craft beer, technology, and social issues. She previously worked for Wisconsin Public Radio.

'Ode to Joy' returns to Overture in September, symphony announces

Madison startups have a lot of great perks and should tout them, said Betsy Rowbottom of The Good Jobs.

PerBlue is one of several local startups that allow employees to enjoy a brew while on the job.

Forrest Woolworth, PerBlue's COO, says employees drink during the day and sometimes stay after-hours to hang out and play board games or foosball in the office