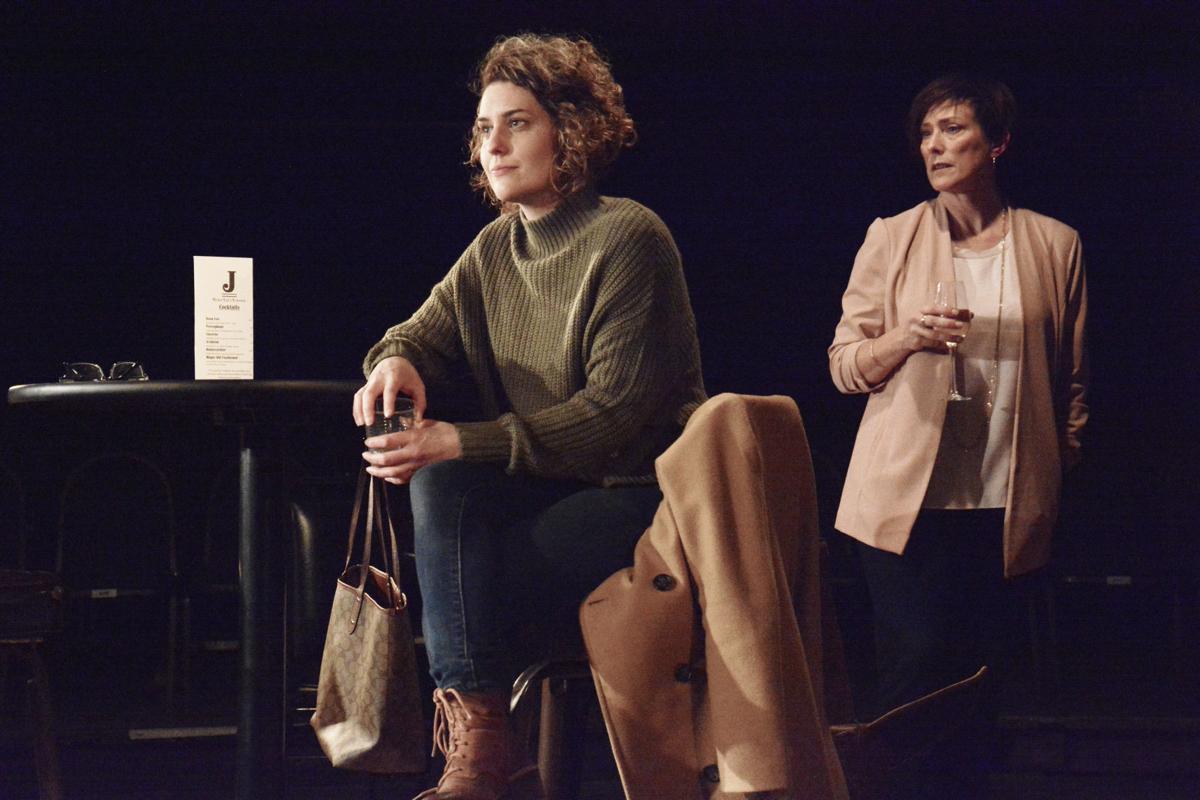 Kelsey Brennan, left, plays a graduate student with a revolutionary idea about why women menstruate in "The How and the Why," also starring Brenda DeVita (right) at Two Crows Theatre Company. 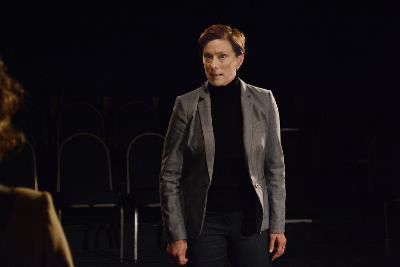 Brenda DeVita plays Zelda Kahn, an evolutionary biologist, in "The How and the Why" produced by Two Crows Theatre in Spring Green. 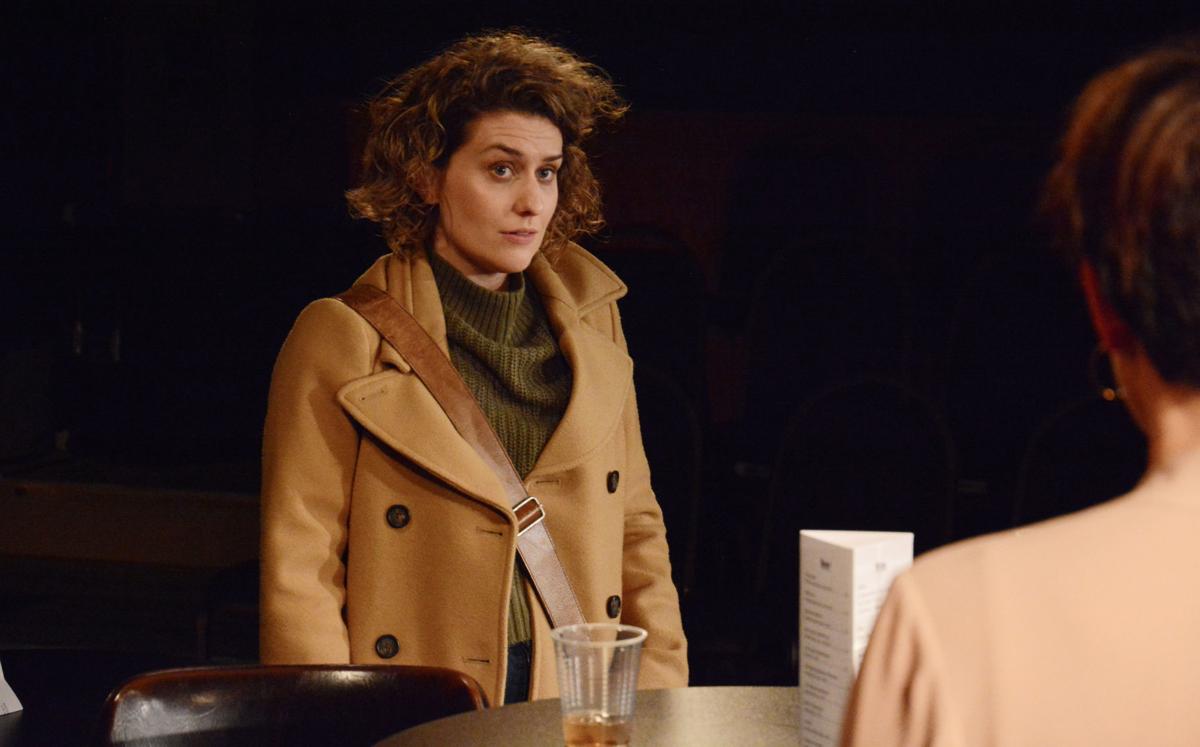 Kelsey Brennan plays Rachel, a hot-tempered graduate student, in Two Crows' production of "The How and the Why."

Kelsey Brennan, left, plays a graduate student with a revolutionary idea about why women menstruate in "The How and the Why," also starring Brenda DeVita (right) at Two Crows Theatre Company.

Brenda DeVita plays Zelda Kahn, an evolutionary biologist, in "The How and the Why" produced by Two Crows Theatre in Spring Green.

Kelsey Brennan plays Rachel, a hot-tempered graduate student, in Two Crows' production of "The How and the Why."

Politicians talk about science like it’s a train on a track: “The science isn’t in yet.”

The idea that facts can be learned once and stay forever true rings false to anyone who ever believed in Santa Claus as a kid. But how many things are we sure of that might be wrong? Not just things about the world, but about what we want, what we need and who we are.

That kind of shifting negotiation between two intelligent, complicated women is the richest pleasure of Sarah Treem’s 2011 two-hander “The How and the Why,” now at Two Crows Theatre Company in Spring Green.

Founded in 2018, Two Crows offers off-season opportunities to artists who work at American Players Theatre nearby, presented on an intimate thrust stage in the Slowpoke Cabaret & Lounge. “The How and the Why” is the second play of Two Crows’ second season, following Colleen Madden’s chilly Dickens adaptation, “A Christmas Haunting,” last month.

“How and the Why” features Brenda DeVita, artistic director of APT, and Kelsey Brennan, a core acting company member there and a co-founder of Two Crows.

When the play opens, Zelda, a tenured professor of evolutionary biology, and Rachel, a passionate young graduate student, are meeting in Zelda’s “significant” mahogany-accented office.

Zelda built her career on a bold idea about menopause, suggesting that prehistoric women who lived longer helped raise their daughter’s children, strengthening their own gene pools. She called it the Grandmother Hypothesis.

Zelda has lived with this theory so long, it has become “like an old lover,” she says. “Someone you fell for years ago, when you were young and stupid.”

For her part, Rachel is on the brink of something. She has the radical idea that sperm are toxic to the female body. Maybe menstruation is a way to protect women from contagion — and maybe, contradicting Zelda’s hypothesis, women were never meant to live past menopause.

“Not if it never gets published,” Rachel responds.

The play's title comes from the idea in biology that every issue has two sides: the how and the why. As Zelda and Rachel work out who they are to each other, they go back to the tools they know best: Have a theory. Test it out, and see if it holds up.

It’s like a high-stakes debate blended with a family argument, where no one is telling her whole truth.

The primary theories in this play are based on real scientific ideas, and describing them onstage could easily feel like a lecture. To the credit of Treem’s script and Laura Rook’s tight, focused direction, the action never sinks under a discussion of pathogens and scientific papers.

DeVita and Brennan are beautifully matched here. Where DeVita's Zelda wrestles with her roiling emotions to keep them in check, Brennan’s Rachel is volatile, ready to leave at one wrong word. For two hours, Rook keeps them circling. She lingers in the silences, letting the awkwardness and tension build.

Much like Forward Theater’s current production of “Every Brilliant Thing,” “The How and the Why” has an appealing intimacy. And like other professor’s-office plays (David Mamet’s “Oleanna,” Eleanor Burgess’s more recent “The Niceties”) it’s fascinating to watch the power dynamic shift with each revelation.

Without a doubt, “The How and the Why” is a strong production, and Two Crows is proving itself to be a substantial creative force in this small town. It makes a person want to lean in and ask questions — kind of like a scientist.

Two Crows Theatre Company presents “The How and the Why”

Running time is about 2 hours with one intermission. Talkbacks on Jan. 30 and Feb. 1.

Theater is collectively watching someone perform empathy in real time. At “Every Brilliant Thing” that empathy extends to the people in the seats.

Paul Fanlund: Will we repeat the false equivalency nightmare of 2016?