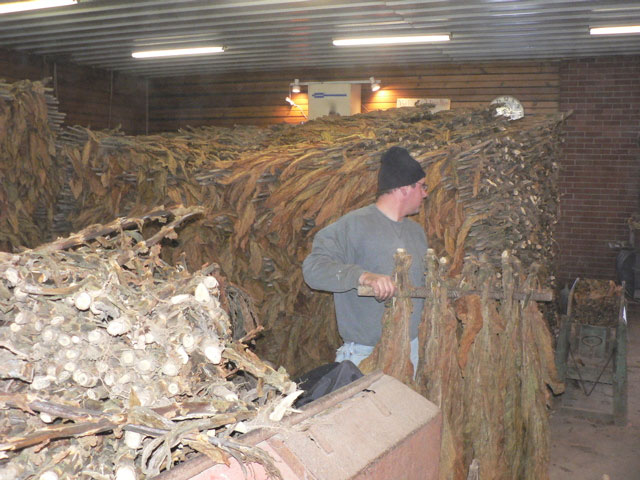 Tobacco is brought from the shed to the strip house for stripping. Moisture is constantly added to the facility to keep the tobacco moist. 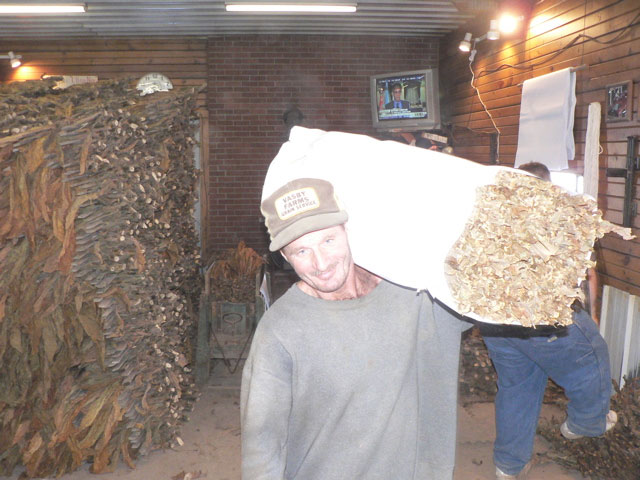 The 40 pound bundle is the final result of the tobacco season that started in May with the transplanting process. 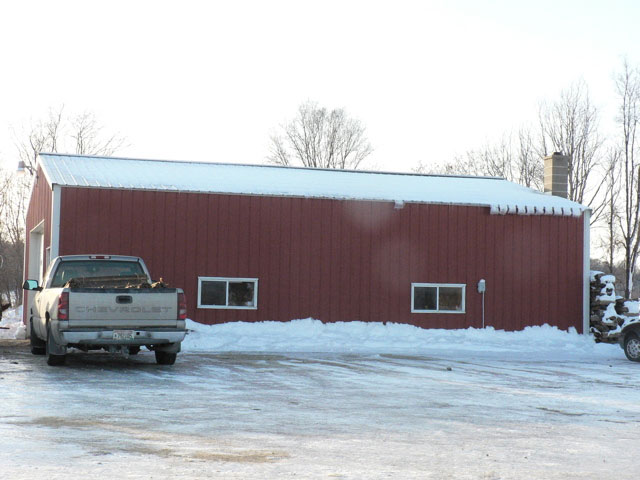 The Christiana Farms strip house near Utica is rather modern for such buildings and it has two big TVs. 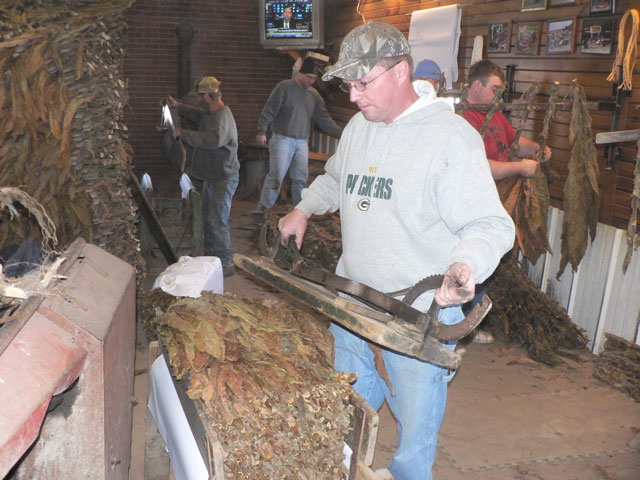 Dennis Lund gets ready to press loose tobacco into a 40-pound bundle that will be wrapped in paper and tied tight. 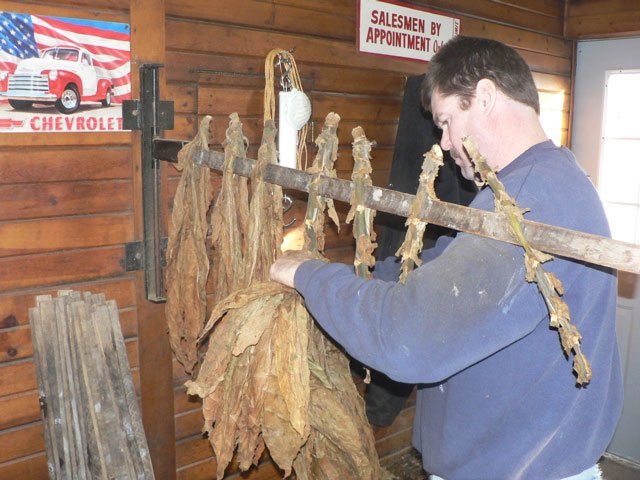 Stripping tobacco is "one leaf at a time." Mike Lund is not a member of the Christiana Farm Lunds -- he's a friend who helps out. 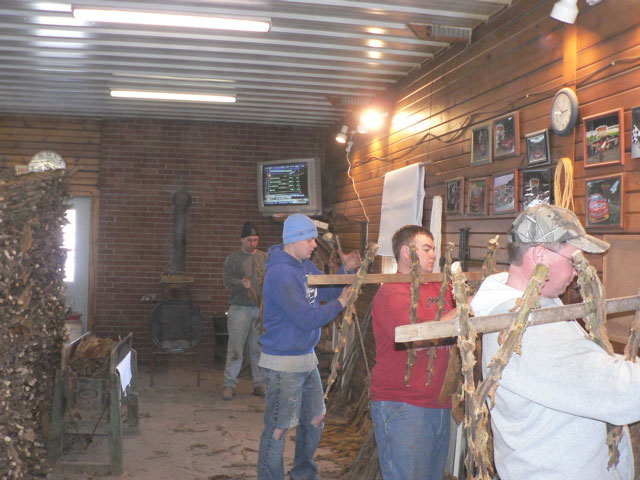 The Lunds had as many as seven people stripping at their Utica strip house. They also strip at two other locations. 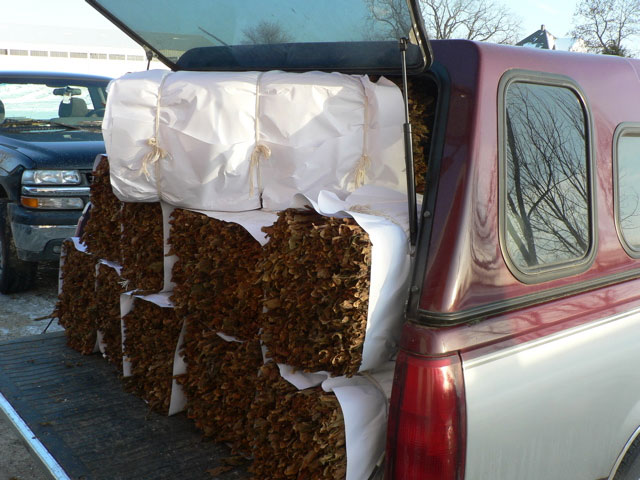 A load of tobacco bundles are ready to go to Swedish Match in Stoughton for processing. 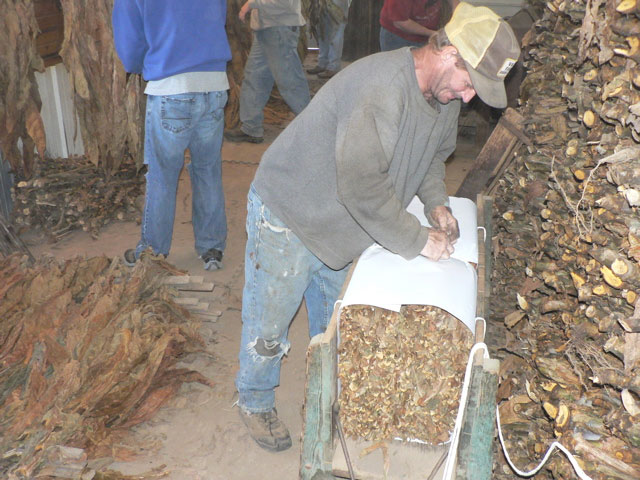 Allan Lund, a neighbor, carries a new tobacco bundle to a truck. 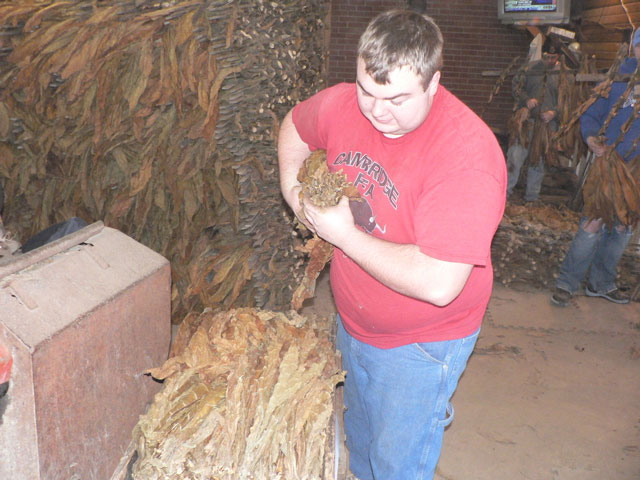 Jeremy Lund, Ron Lund's son, readies a hand of tobacco for placing in the bundle box.
By JOHN ONCKEN | Special to The Capital Times

"The shiftless, lazy, careless farmer need not expect to be successful for he will make a miserable failure if he tried," the speaker said. "It needs brains; it needs untiring energy and above all it needs men who can adapt themselves to circumstances and learn and profit by experience."

These words were part of a lengthy report of the Wisconsin Agricultural Society, "The Ins and Outs of Tobacco Culture," presented by F.W. Coon to the State Agricultural convention held in February 1885 in Madison.

At that time, Wisconsin was a leading tobacco growing state with some 16,000 acres grown by about 4,000 farmers. mainly in Rock and Dane counties.

Edgerton alone employed more than 1,000 people sorting tobacco in some 45 warehouses, producing a payroll of more than $100,000. Needless to say, tobacco growing was a major economic factor in southern Wisconsin.

Yet, even some 125 years ago there were people who expressed concern about raising tobacco, not because of health reasons but for what a later speaker asked: "Would you stoop to an occupation, the outcome of which is simply money?"

The tobacco conversation continued with questions as to whether the new College of Agriculture at the University of Wisconsin should include tobacco culture in its educational courses.

It ended with a resolution (not brought to a vote) that the executive committee of the Society "be prohibited from using tobacco, cigars or anything of that sort."

The president closed the discussion by saying, "If a man don't have any habits, I feel sorry for him."

History tells us that tobacco was grown and used by the Indians long before the Pilgrims landed in America. The crop then moved to Europe but never left the U.S.

Indeed, Wisconsin has a long history of raising tobacco, although it may come as a big surprise to folks not familiar with farming history in Dane, Rock, Jefferson, Columbia, Vernon, Crawford and Richland counties, where tobacco was a major crop for well over a century.

Two Ohio transplants, Ralph Pomeroy and J.J. Heistand, were the first farmers to plant tobacco in Wisconsin. The location of that first tobacco field in 1844 is in some dispute -- it was either in Walworth or Rock county.

What isn't in doubt is that the major influx of Norwegians moving to southern and southwest Wisconsin saw tobacco as a crop they could raise profitably. Although Norwegians had no history of raising the crop in their homeland, they became known for their adoption of the crop as their own.

Family names such as Nelson, Swenson, Larson, Erickson, Halvorson, Lund, Weum, and Jacobson are forever intertwined with tobacco raising even though they may have quit raising the crop long ago.

Today, there are perhaps 1,000 acres of tobacco raised in Wisconsin, all of it in Rock, Dane, Jefferson and Columbia counties. Because of a change in the acreage allotment program several years ago, tobacco growing in Vernon and surrounding counties has ceased.

Growing tobacco is far more than just raising a crop. Unlike most crops that long ago were mechanized, raising tobacco still is dependent on bending at the waist, strong legs and arms and a certain amount of mental toughness necessary to cut a long row of tobacco with a hand held ax, pile it by hand, lift it onto wagons and hang it from precarious tamarack poles in a shed.

It is not a "sure" crop what with a plethora of molds, rusts and worms that can ruin an an outstanding crop just days prior to harvest.

And until just a few years ago, the price the farmer would receive was unknown until a few days prior to the final step in the long growing process -- stripping the leaves and forming them into 40 pound bundles -- when the tobacco buyers visited growers with a price offer.

Tobacco often was the crop that paid the farm mortgage or bought mother a new washer or refrigerator. It's often been said that it was tobacco that paid for many of the picturesque dairy barns built in the first six decades of the 1900s -- the barns that helped make America's Dairyland.

Tobacco also was the crop that produced work and the first earned money for farm boys. The crop was a young man's job because they had not yet been subjected to arthritis and all the other aches and pains that come with age. (This writer remembers well the $1 per hour he earned for helping plant tobacco at age 12 for neighbor Leo Vauhm. That was big money!)

For most of its more than 100 years in Wisconsin, the tiny tobacco seed -- 450,000 seeds per ounce -- sprouted in an old wool sock on the back of the cook stove in the kitchen. It didn't seem very scientific but it worked.

After a growth period in a tobacco bed covered by thin white cloth, the plants were pulled and transplanted into the newly worked field by three people on a tobacco planter -- a driver of either horses or a small tractor and two planters seated just above the ground with a lapful of plants, one planting left handed, one right handed.

The growing plants had to be hoed, topped, suckers removed, and, ultimately, cut, piled, strung on laths, hung in the shed and finally stripped and delivered to a warehouse.

Not much in the tobacco growing process has changed today.

Farmers don't sprout their own tobacco seeds or have tobacco beds nowadays, they buy the about 8-inch plants from specialty growers in Michigan and locally. Transplanting is a bit easier these days as the plants are placed on finger like gadgets that put the plant into the soil, but it still takes two human planters per row, even on the modern two-row planters.

Although it was never discussed or even acknowledged, every phase of the tobacco growing process involved competition. Hoeing, cutting, piling, stringing, stripping are all side by side work and you never want to be the slowest.

How could the 20-year-old let a 12-year-old girl get to the end of the row ahead of him? Or string a lath of plants faster? Or strip a handful quicker?

You just can't let that happen! That's why it was never discussed. If someone brought it up, the answer was always. "Oh, I didn't know we were racing." Or, "I was a bit slower today, a cow kicked me last night and I am a bit stiff." Or, maybe, "I'm careful how I handle the leaves -- speed leads to damage."

Dennis Lund and his brothers Dale, James, and Ron, who raised 44 acres at their Christiana Farms at Cambridge, say the 2009 crop was of "outstanding quality -- the best in many years." And the price at $1.90 per pound was the highest ever.

The future of tobacco growing in America's Dairyland is a bit in doubt. Foreign imports are a constant threat and the two major buyers determine the amount grown here depending on their needs. (Wisconsin tobacco is only used in chewing product -- not in cigarettes or cigars.)

"Ever fewer people are willing to do the hard work," growers will tell you. And, even though it can be a profitable crop, acreage is shrinking as the newer generation of farmers prefer raising corn and soybeans with their big equipment over the hand labor required for tobacco.

If you never worked in tobacco, you might be surprised at the crop's long history in Wisconsin. If you grew up raising tobacco you have fond memories of hot, sweaty and long days working in the fields. And, an overwhelming pride in knowing that you did it and survived.

John F. Oncken is owner of Oncken Communications, a Madison based agricultural information and consulting company. He can be reached at 608-222-0624 or e-mail him at jfodairy@chorus.net.

Tobacco is brought from the shed to the strip house for stripping. Moisture is constantly added to the facility to keep the tobacco moist.

The 40 pound bundle is the final result of the tobacco season that started in May with the transplanting process.

The Christiana Farms strip house near Utica is rather modern for such buildings and it has two big TVs.

Dennis Lund gets ready to press loose tobacco into a 40-pound bundle that will be wrapped in paper and tied tight.

Stripping tobacco is "one leaf at a time." Mike Lund is not a member of the Christiana Farm Lunds -- he's a friend who helps out.

The Lunds had as many as seven people stripping at their Utica strip house. They also strip at two other locations.

A load of tobacco bundles are ready to go to Swedish Match in Stoughton for processing.

Allan Lund, a neighbor, carries a new tobacco bundle to a truck.