After a small ceremony, the Brueckens stepped outside for a photo and were surprised by their friends who had organized a mobile receiving line. Well-wishers dispersed across 18 vehicles circled the church parking lot. 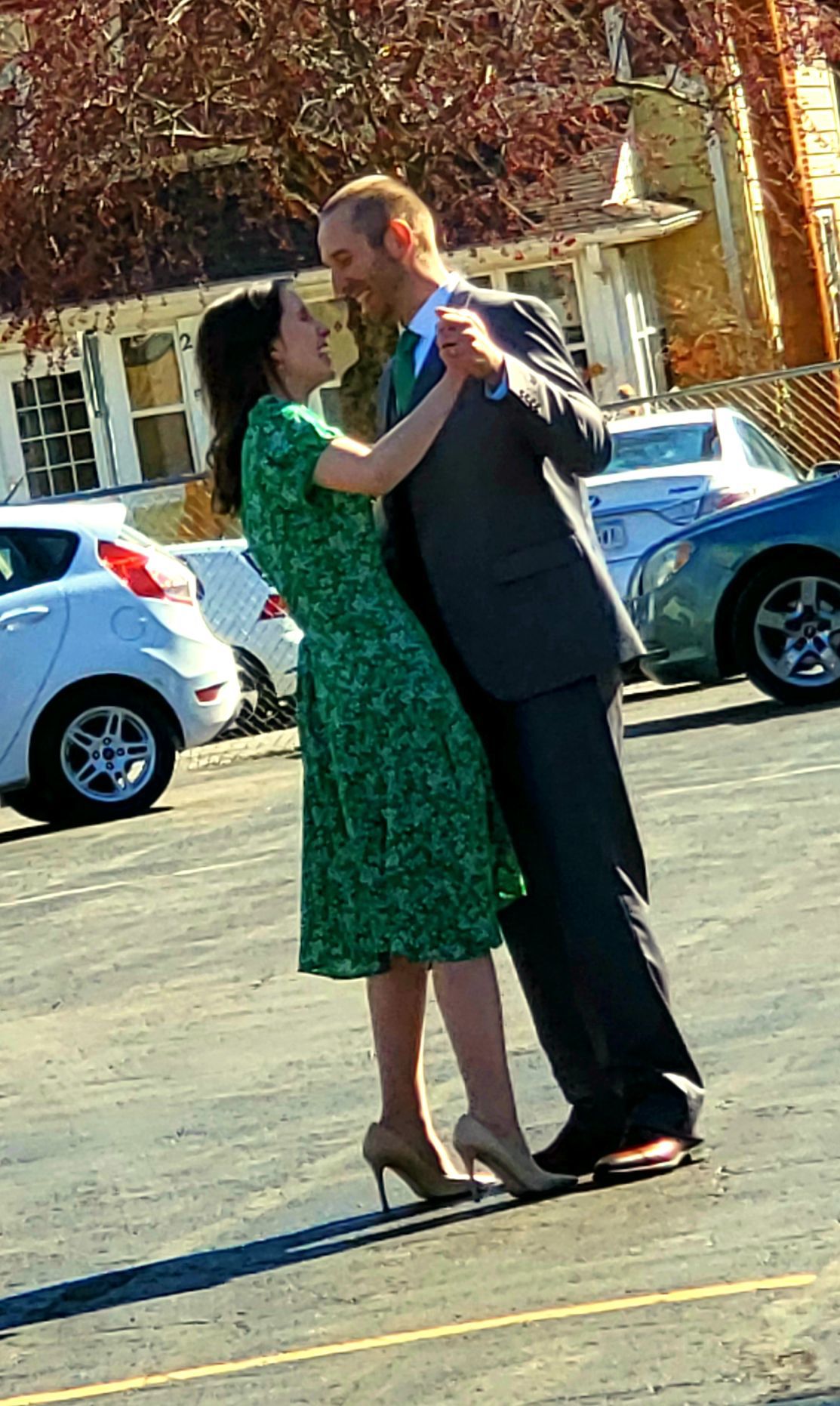 After the small ceremony, the Brueckens stepped outside for a photo and were surprised by their friends who had organized a mobile receiving line. Well-wishers dispersed across 18 vehicles waved, then went around the block and circled the church parking lot.

Dancing to their first song as a married couple in a church parking lot encircled by friends in cars was not the wedding Sarah and Josh Bruecken imagined.

But celebrating love amidst a pandemic requires flexibility.

After planning a ceremony and reception with more than 300 people for May 2, the Brueckens became increasingly concerned as they followed early pandemic news out of Italy, where they were set to honeymoon. When it became apparent they would have to delay their large celebration, they didn’t want to wait to be married and felt their window for doing so was closing.

“We were looking forward to being married and we really didn’t like the idea of not knowing when we would be able to get married, and the waiting and the uncertainty of whether it was two months or six months,” Sarah Bruecken said. “We wanted to be married and wanted to ride out the pandemic together as a married couple and not wait in that uncertainty.”

So they set a new date last Wednesday, got a marriage license Friday and were wed Saturday at Blessed Sacrament Catholic Church.

The bride's brother served as cameraman and streamed the wedding live through Zoom to more than 100 people, some of whom even dressed up for the event and later sent the couple photos. They adhered to the 10 person limit for gatherings and only had immediate family and their priest at the ceremony.

Afterward, the Brueckens stepped outside for a photo and were surprised by their friends who had organized a mobile receiving line. Well-wishers dispersed across 18 vehicles waved, then went around the block and circled the church parking lot. One blasted the Bruecken’s planned first dance song, Jason Mraz’s “I Won’t Give Up” as they danced. The wedding dress was not yet ready so the bride wore green.

“That was really, really special,” said Sarah Bruecken. “Even though it wasn't any of the traditional things, it felt really special. It was certainly a memorable day.”

The pair plans to hold a reception for their guests after the pandemic is over, but they lost no money from their vendors and were able to get vouchers for some services they plan to use in the future.

“We’re just grateful to be able to get married under the circumstances, even if it’s different than we imagined,” she said.

As the novel coronavirus and the disease it causes, COVID-19, continues to spread, couples like the Brueckens planning nuptials and local businesses that depend on those events are adapting.

Dane County is still issuing marriage licenses and there has been consistent demand for them, with some couples choosing to get married in a simple ceremony sooner because of the pandemic, said Dane County Clerk Scott McDonell.

“We’re seeing an increase in couples who feel they need to get married for purposes of health insurance and the kids,” he said.

On Tuesday, the county started offering a virtual portal through which to get a marriage license, but officials are still able to accommodate couples at the clerk’s office, passing paperwork underneath the locked front door from 10 a.m. through 1 p.m.

Couples who would like to apply for a license virtually should email or call the county at county.clerk@countyofdane.com or 608-266-4121, and an official will walk them through setting it up, McDonnell said.

“We know how important it is for people to get their marriage license because of this crisis so we’re going to keep doing it, but we want to make sure we’re doing it in a safe manner for our staff and our couples, so we’re going to have to make it work,” he said.

Though couples can still pick up marriage licenses, the accompanying celebrations are often being canceled or postponed as the state urges people to stay home.

After a series of incremental steps closing some businesses and schools over the last week, Gov. Tony Evers on Tuesday ordered all “non-essential” businesses to close. Last week he banned gatherings of more than 10 people.

“Right now with the situation, everyone is being really flexible,” said Romulo Ueda, a Madison photographer whose business depends on weddings and nonprofit events.

The wedding services industry nationwide is a $78 billion market. In Wisconsin, couples spend about $23,000 on average on their wedding celebration, according to The Wedding Report, a wedding market data website. Last year there were 33,352 weddings in the state, according to the site.

Ueda had eight weddings scheduled in 2020 and so far one has been canceled and another postponed. His nonprofit clients have also canceled, forcing him to cut household expenses and rely on his wife’s income to support their family.

Sarah Mullins, owner of A La Crate, a boutique equipment rental company in Madison which supplies place settings, vintage furniture and decor for weddings and corporate events, is encouraging clients to postpone rather than cancel events.

With cancellations, she is turning deposits into a store credit, a policy common among rental companies.

“We’re all just trying our best to support our customers and keep our business alive at the same time,” she said. “The postponements are great and that’s what we’re encouraging people to do.”

Whitney Johnson, an attorney in Madison, is doing just that with her fiance John Healy.

The pair had been planning their 350-person wedding for almost a year and were ready to wed on May 23 at The Lageret in Stoughton. Their backup date is now July 3.

“The hard thing is we don't really know what the state of this pandemic is going to be as of May, but it just keeps looking like it’s getting worse and worse,” she said.

Johnson said her vendors and wedding planners have all been incredibly flexible and responsive. But COVID-19 will still take a toll, regardless of when the wedding is held, Johnson said, because her grandparents who live in North Dakota will no longer be able to risk taking the trip.

“It will be really hard not being able to have them there,” she said.

In general though, Johnson is trying to take the changes in stride.

“It’s weird. Part of me thinks it hasn’t really hit me yet because wedding planning in general is really stressful,” she said. “I only broke down once and I was talking to our wedding planner and she said, ‘You’re allowed to cry and then have a dance party,’ so that’s what we did.”

For many wedding vendors, the pandemic hit as they are coming out of a slow winter season, exacerbating concerns.

“I have a pit in my stomach for sure,” said Erin Joswick, owner of Daffodil Parker, a local floral shop. With weddings comprising 90 percent of her business, Joswisk said she is just trying to get through April.

“We just got off of a five month slow period where I rely on our reserves to keep all of our employees paid. As much as I love flowers, I know they’re not as important as food and water and health care,” she said.

Before the pandemic, the shop had weddings booked nearly every weekend through October.

“We are remaining flexible but our flexibility has boiled down to: all of our events are canceled,” she said.

When event flowers are canceled for Daffodil Parker, that also means she can’t buy from the six vendors she works with — local flower wholesalers and growers — which hurt those businesses, too, Joswick said.

Other small businesses are slashing expenses to pay their employees, waiving rescheduling fees and other contract changes and are relying on deposits to keep them afloat until the pandemic subsides.

Geoffrey Sandler has operated a DJ company, “Celebrations Entertainment,” in Madison for 37 years and is doing all he can to continue to pay his three employees. The pandemic has resulted in nearly 50 events being canceled and the company is down more than $60,000 in revenue from March and April, he said.

“The event industry is at a complete halt,” he said.

After a small ceremony, the Brueckens stepped outside for a photo and were surprised by their friends who had organized a mobile receiving line. Well-wishers dispersed across 18 vehicles circled the church parking lot. 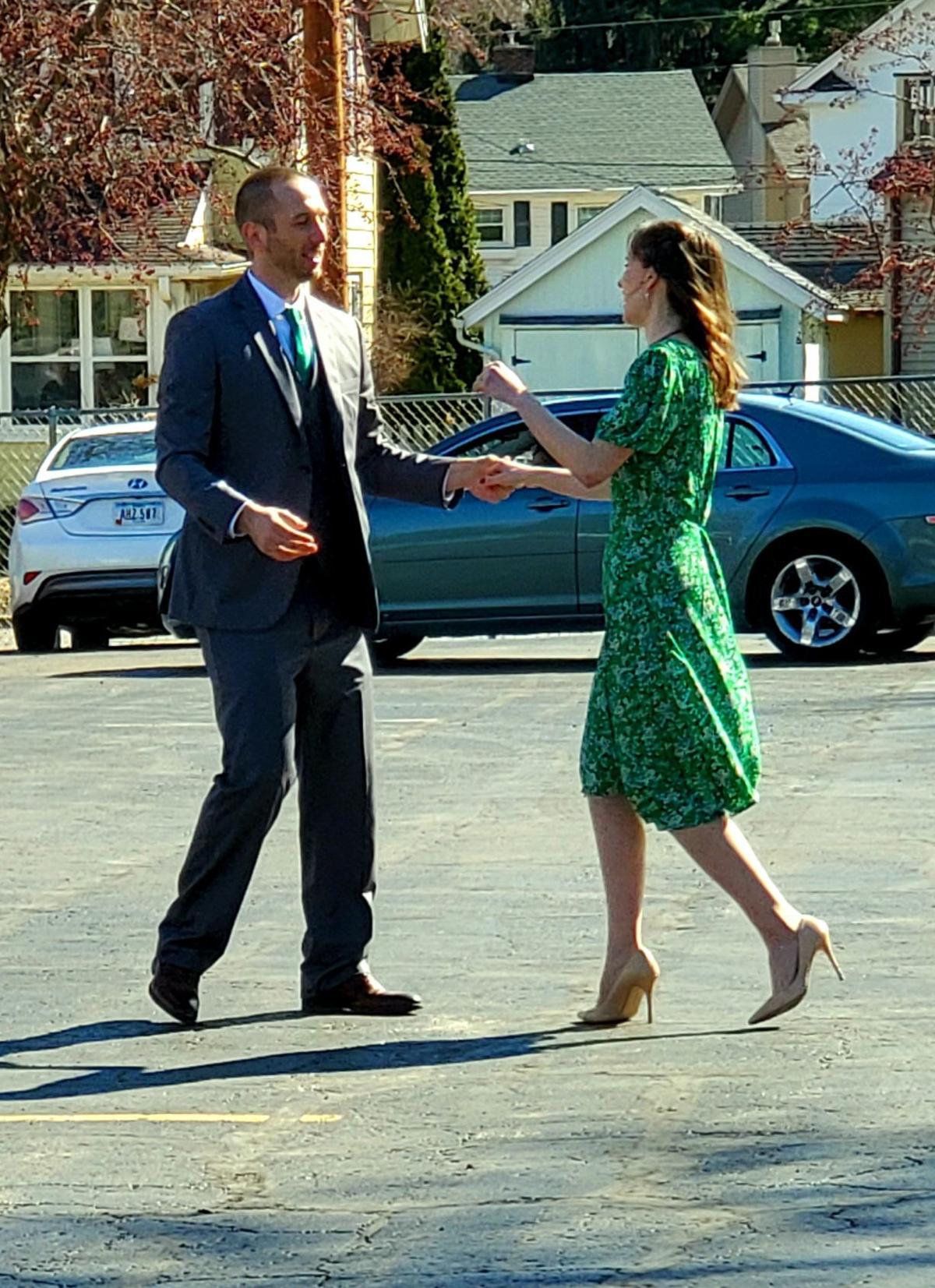 After planning a ceremony and reception with more than 300 people for May 2, Sarah and Josh Bruecken set a new date last Wednesday, got a marriage license Friday and were wed Saturday at Blessed Sacrament Catholic Church in Madison.

After the small ceremony, the Brueckens stepped outside for a photo and were surprised by their friends who had organized a mobile receiving line. Well-wishers dispersed across 18 vehicles waved, then went around the block and circled the church parking lot.