The Legislature’s powerful budget committee is, for now, refusing to reimburse Dane and Milwaukee county officials for their work in conducting the election recount President Donald Trump requested and paid for following his loss in Wisconsin.

The panel, controlled by Republicans, officially paused the process last Friday after one member raised an objection to the ask, meaning the full Joint Finance Committee may have to meet before the dollars are passed on. The state already has $3 million from Trump’s campaign to cover what the counties’ estimated costs were for the recount.

The identity of the lawmaker who raised the objection is unknown, but the offices of the committee’s co-chairs say it came about because only the initial estimate of the costs is available, while the final figures haven’t yet been completed or shared. 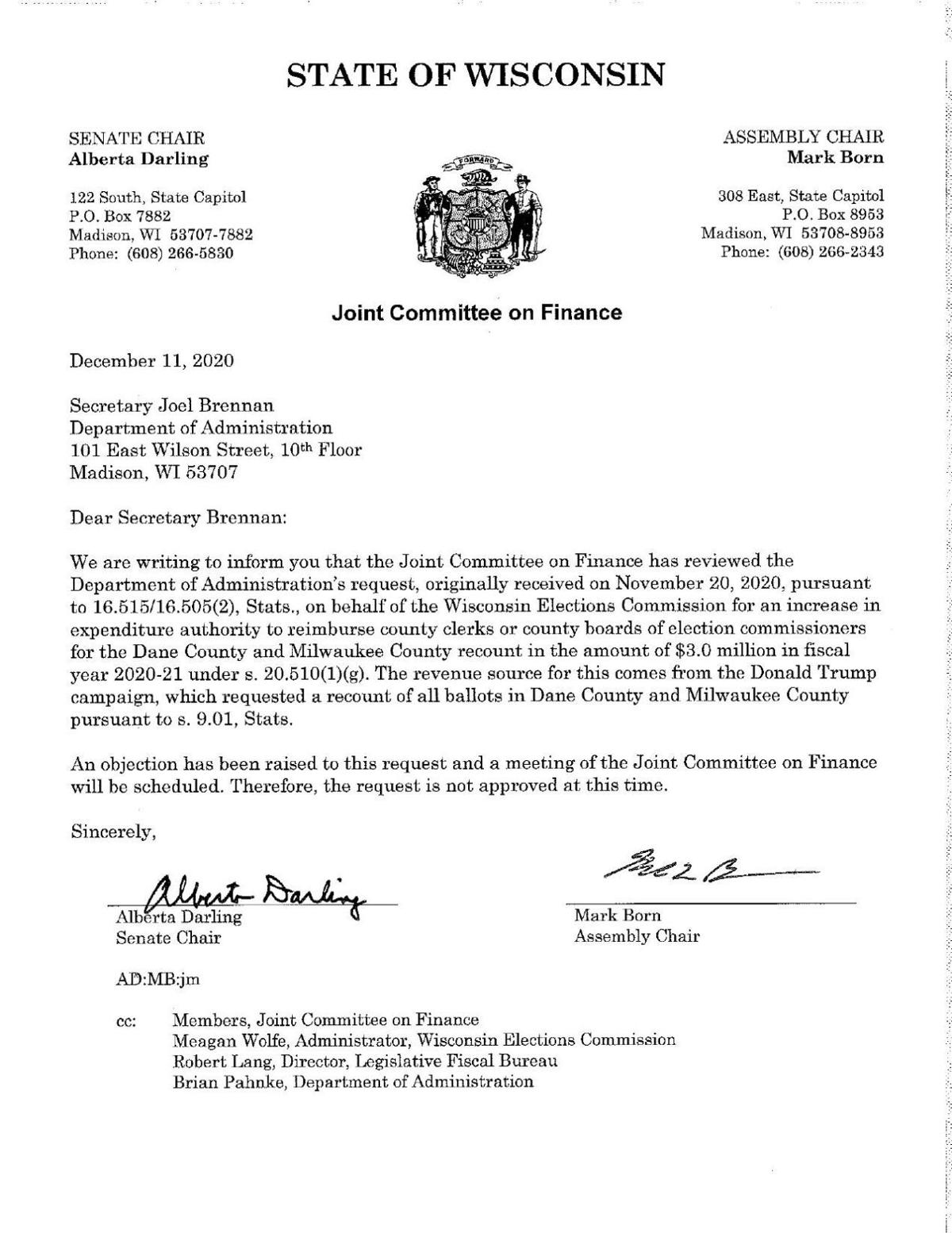 “The committee simply needs more information,” co-chair Mark Born, R-Beaver Dam, said in a statement. “At the time the request was before the committee, and still today, we do not know the actual costs of the recount. Once those counties submit their receipts, we will have more information.”

On Monday, Dane County Clerk Scott McDonell said in an email that the county is working through the billing process to determine a final cost for the recount. He had been waiting on a bill from the Madison Police Department, which he expected to be “significant.”

Four years ago, when all 72 Wisconsin counties conducted a presidential recount after Green Party candidate Jill Stein requested it, Born said some counties weren’t reimbursed until February 2017. A Wisconsin Elections Commission recount update from that period showed Stein's campaign was issued a refund on Jan. 13.

In the meantime, local officials criticized the anonymous objection and said the refusal to reimburse funds for now hurts Dane County residents.

Dane County Executive Joe Parisi said in a statement it's crucial that lawmakers quickly review whatever they need to and forward on the funding "without delay."

He added that he anticipated both Dane and Milwaukee counties would have their final receipts ready within a couple days. Milwaukee County officials didn't immediately return requests for comment about their own timeline.

"Given the uncertainty of continued federal support for local COVID response, it's critical the state legislature move on what should be nothing more than formality — not wait weeks or months — but reimburse these counties now so local units of government can continue their work to manage the community impacts of this pandemic," Parisi said.

The reimbursement request was submitted to the Joint Finance Committee on behalf of the Wisconsin Elections Commission on Nov. 20, when the recount officially kicked off in the two counties. WEC, though required by state statute to reimburse local officials for the costs incurred, first needs approval from the committee to allocate the money because it lacks budget authority to make the appropriation.

Once the actual costs of conducting the recount are reported, any extra funding leftover from the $3 million is refunded to the Trump campaign. The process has to occur within 45 days of the recount’s completion. The counties completed their work and certified results at the end of November.

Dane County Board Chair Analiese Eicher, who was quick to draw attention to the committee's objection last week on Twitter, called the anonymous objection “ridiculous” and the lack of a reason for it “even more outrageous.”

“Our staff, the workers, and the volunteers moved mountains to safely conduct an unnecessary recount during a deadly pandemic,” Eicher said in an email. “The Joint Committee on Finance should be ashamed for continuing this political charade and should disclose to the public who in the state legislature objected to the bill being paid.”

She looks forward to the state reimbursing the costs in an “expeditious” manner.

Under the Joint Finance Committee’s passive review process, state agencies submit requests to lawmakers. Unless a member objects, signaling they want to meet in a formal session to discuss a request, the ask is approved automatically after a certain period of time. The recount reimbursement request was set to be approved on Monday had an objection not been logged.

Going forward, the committee could take up the request during a meeting as part of the 13.10 process, which lets the committee adjust budgetary authority and more. It’s unclear when such a meeting would take place, as both Born and a staffer to outgoing Senate co-chair Alberta Darling, R-River Hills, didn’t specify a timeline.

Darling’s staffer, Bob Delaporte, wrote in an email this week it’s possible the committee may not meet at all once the actual costs are submitted. Those more exact costs, he said, could go through the same passive review process and could then, presumably, pass through without facing an objection.

It’s also possible, if unlikely, that the original objection could be lifted by the member who made it, which would mean the request is sent back out to committee members for an additional five-day passive review process. If no further objections are made, the ask would be approved at that time.

When life gave us lemons, 8-year-old Belleville girl made a lemonade stand to fight hunger

Following an initial objection last month, the Legislature's powerful budget committee has signed off on the reimbursement to Dane and Milwaukee counties to cover their costs for conducting the recount President Donald Trump requested and paid for after the November election.