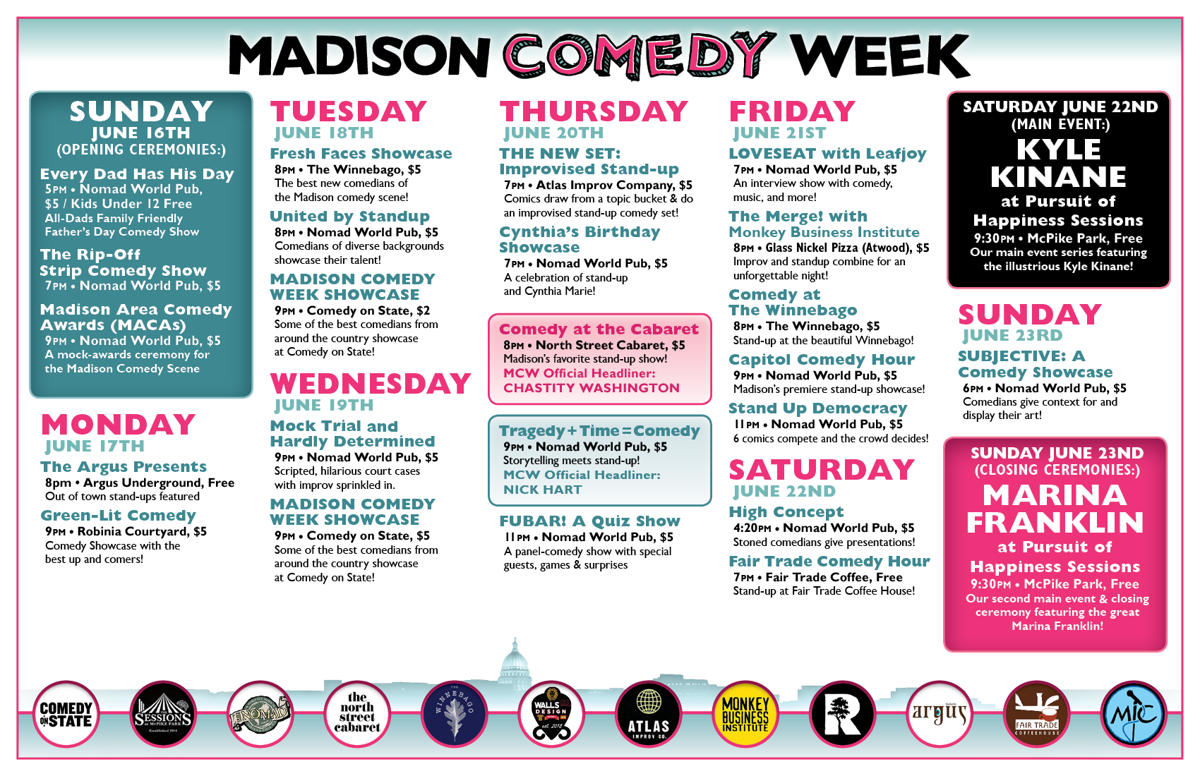 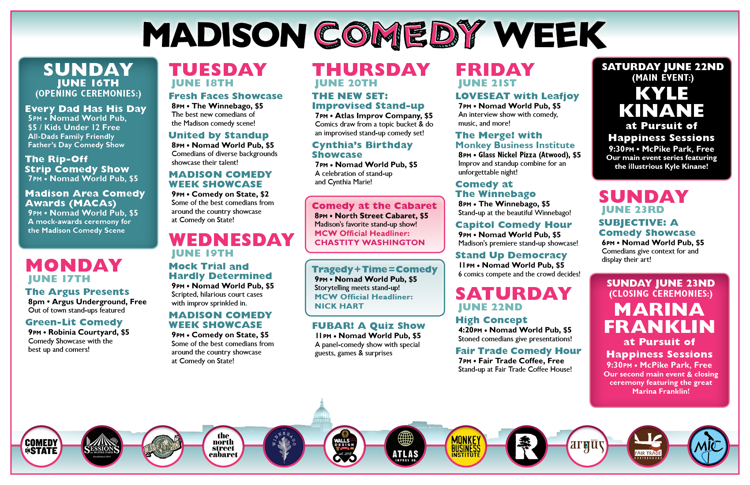 Madison Comedy Week Showcases the Best Comedians in the City and the Country!

Local, regional and celebrity comedians team up to bring you Madison Comedy Week

MADISON, Wis. (June 13, 2019) --Madison Comedy Week kicks off its second annual comedy festival this summer from June 16th - June 23rd. Over 80 local, regional, and national comedians team up to bring you 25 shows over 8 days to shine a light on the comedy-hot-bed that is Madison, Wisconsin. The festival will feature stand-up comedy, concept shows, and improv as well as music and burlesque. The event is produced by Jake Snell, Cynthia Marie, and Peter Rambo, with support from local and regional comedians, show producers, venues, and nationally touring celebrity comics via sponsorship from The Sessions at McPike Park.

Among the 25 shows Madison Comedy Week offers, nationally touring comedians Kyle Kinane and Marina Franklin are headlining the festival’s marquee event as part of The Pursuit of Happiness Sessions, a second-year installment of The Sessions at McPike Park. The list of credits between these two comedy veterans is astounding and ranges from the late night circuit to various television series and movie appearances. Bob Queen and Nancy Kathman of the Kathman Queen Foundation sponsor this particular show series which brings a level of legitimacy to the event that makes Madison Comedy Week one of the best comedy festivals around! The headliners for the inaugural event were comedy couple Mary Mack & Tim Harmston, and with such a successful first year, it was a no-brainer to extend to two nights.

The event will reflect independently-produced comedy in Madison, which has continued to grow and expand into great venues around town including Nomad World Pub, North Street Cabaret, The Winnebago, Robinia Courtyard, and more. A few venues set the tone as far as involvement from local comedians, including Comedy on State, Atlas Improv, Monkey Business Institute, and Lady Laughs Comedy.

Just this spring, Comedy on State hosted auditions for the prestigious “Just for Laughs” comedy festival in Montreal, a breeding-ground for famous comedians. “It’s clear that Madison is on the national comedy map, and we want to use this event to showcase why” said festival producer Jake Snell. “Comedy on State attracts huge names year round and also finds ways to support the local scene and help comedians develop and share the stage with comics who are doing the things they want to do” he continued. Peter Rambo adds that “It’s great to see how many individuals carry the torch as well and provide local comedians with good opportunities through the long list of independent showcases we have. Madison’s comedy scene competes with that of much larger cities, and this event is just one more legitimizing factor of that.”

The amount of interest shown by the Madison public already has been wonderful. “We have a very diverse and inclusive lineup that we feel is truly representative of all the different types of people doing comedy in Madison” said producer Cynthia Marie. Whatever your comedy flavor, you will be able to find something you can afford and enjoy by attending this festival!

The full show calendar, lineups and event descriptions can be found on the Madison Comedy Week facebook page, as well as listed on the website for the event, http://madisoncomedyweek.com. Tickets to shows are available at the door and also linked through the Facebook event pages on Madison Comedy Week’s page via Eventbrite. There are also many free shows, including our marquee events on June 22nd and 23rd as part of the Pursuit of Happiness Session at McPike Park.

The opening ceremony for the event will be held on June at Nomad World Pub with a triple feature of shows ending with the Madison Area Comedy Awards at 9 p.m., which is a mock-awards ceremony giving awards to Madison comedians for arbitrary accomplishments. The festival will continue with the usual independently produced shows at their usual venues, as well as a variety of concept shows hosted by Nomad World Pub and two nights of showcases at Comedy on State. Tickets are available on Eventbrite and full-access passes for all thirteen Nomad World Pub shows will be available through Madison Comedy Week’s website.

Madison Comedy Week was created in response to the boom-phase of local Madison comedy of all forms, and the artistic scenes, venues, show producers, and businesses that support these efforts. The event is scheduled to be held annually and always bringing in world class and up and coming talent.. Producers Jake Snell, Cynthia Marie, and Peter Rambo are already looking to add additional producers, partners and performers for the 2020 festival. The idea of the festival is predicated upon involvement from all of the entities and performers that make Madison the comedy hot-bed that it is, and all of the shows that attract big names and turnouts year-round. This is the first full-scale festival of its kind in Madison that holistically showcases all of Madison comedy. Priding itself on being a diverse, inclusive, and representative lineup of performers, there are big things on the horizon for Madison Comedy Week. (facebook & website)

For photos and promotional media, contact Jake Snell at madisoncomedyweek@gmail.com or (262) 909-6698