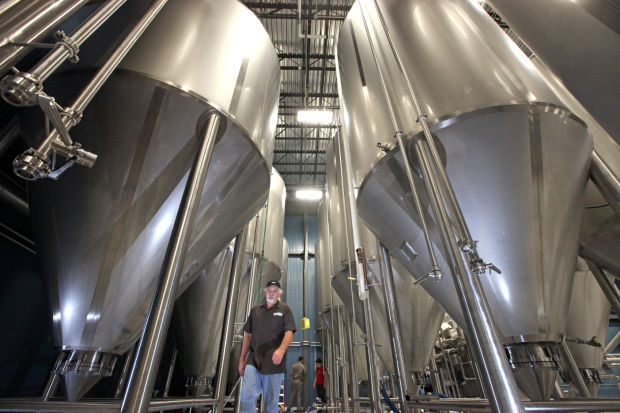 Kirby Nelson, vice president and brewmaster at Wisconsin Brewing Co. in Verona, walks through a line of fermentation tanks. The brewery opened in 2013 and on Tuesday announced it will make an alcoholic root beer on contract for Illinois-based Small Town Brewery. 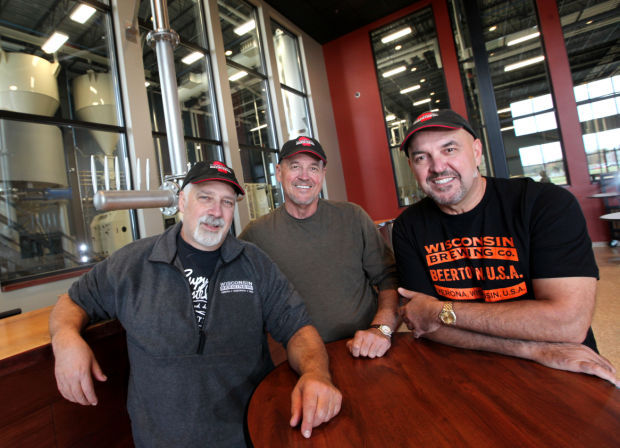 The founders of Wisconsin Brewing Co. bring decades of brewing and business experience to the operation. Brewmaster Kirby Nelson, left, is an award-winning brewer who spent 25 years at Capital Brewery. Chief financial officer Mark Nolen, center, has over 35 years of banking experience. His brother Carl Nolen is the former president of Capital Brewery. 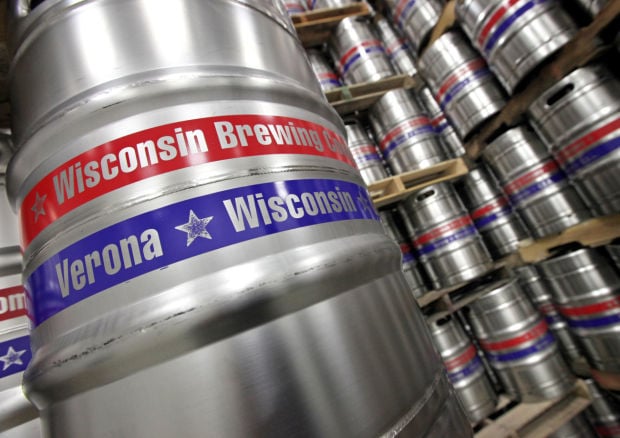 Half-barrel kegs are stacked and ready for filling inside Wisconsin Brewing Co. Eventually, as production increases, the brewery will invest millions of dollars more in kegs. 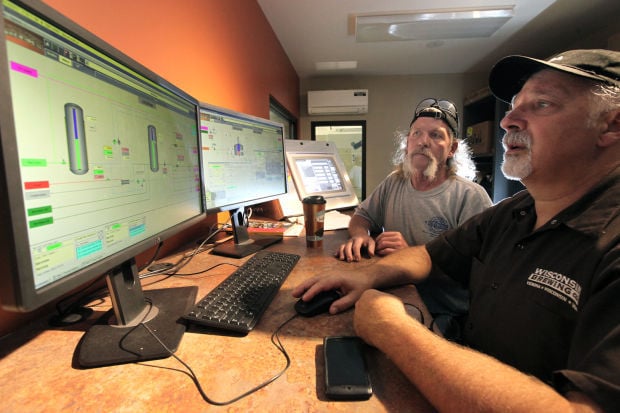 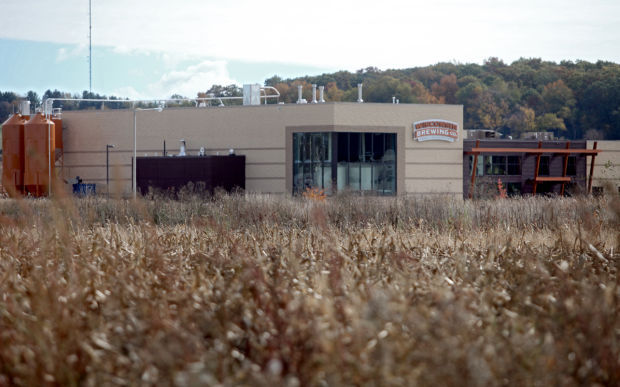 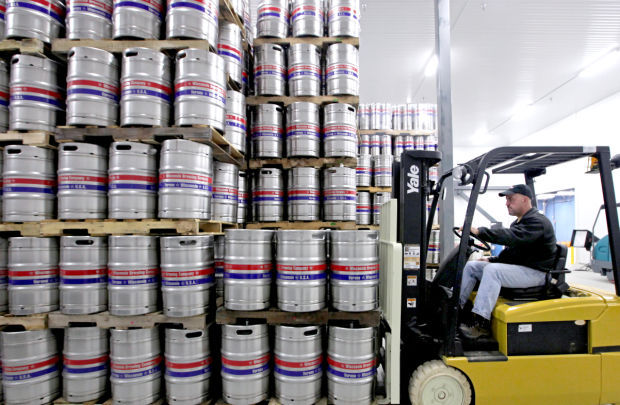 Carl Nolen, president and CEO of Wisconsin Brewing Co., uses a forklift to position kegs to be filled with WBC Amber. 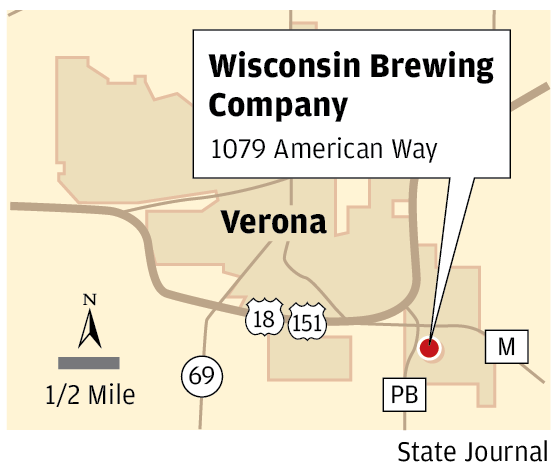 VERONA — The startup plan for the state’s newest brewery follows a different path from most craft brewing companies.

New Glarus Brewing Co. started in 1993 in an old appliance factory after Deb and Dan Carey sold their house. Tom Porter cashed in his 401(k) to buy a three-barrel brewhouse for Lake Louie Brewing, which he built in a 576-square-foot storage shed near Arena. And Madison’s Ale Asylum, now in a 45,000-square-foot, $8 million brewery, started in 2006 in a strip mall and initially made about 2,500 barrels a year.

Not so for Wisconsin Brewing Co.

Its $11 million Verona facility has a brewhouse that can make 80 barrels of beer per batch and is scheduled to produce 20,000 barrels in its first year.

The company is debt-free, having raised $8 million from investors, and by 2015 plans to spend more than $12 million on a state-of-the-art bottling and packaging line that would be housed in a new addition. Ultimately, and in relatively short order, the company wants to produce 250,000 barrels a year, about double what New Glarus, the state’s largest craft brewer, will make this year.

“Those are pretty amazing numbers to me, only in that no craft brewery in the state has done that yet. And there are people that have been in business for a lot of years,” said Jeff Hamilton, president of Sprecher Brewing Co. in Milwaukee and past president of the Wisconsin Brewers Guild. “It’s probably possible, but it’s pretty tough to do.”

Besides its size and lofty production goals, Wisconsin Brewing Co. — which opens its doors this week in the Verona Technology Park — has a management team with decades of experience in brewing, distribution, finance and construction.

CEO and president Carl Nolen and vice president and brewmaster Kirby Nelson both spent years at Capital Brewery in Middleton. Nolen’s brother, Mark Nolen, is the company’s chief financial officer and brings more than 35 years of banking and business start-up experience to the brewery. Mike McGuire, the operations director who guided the brewery’s construction, spent more than 30 years with Alliant Energy, where he most recently traveled extensively building wind farms. He also was the first investor in the brewery.

“There is no way we fail,” said McGuire, a Beloit native and UW-Eau Claire graduate. “This is such a great team because everyone has their own expertise.”

Wisconsin Brewing Co. was formed after the Nolens made an unsuccessful bid in 2011 to buy Capital Brewery. The duo then began scouring the region for a place to start a brewery, and they found some property just off Highway 18-151 at the intersection of highways M and PB.

The facility was built by developer John Livesey with the understanding that WBC, which contributed $400,000 to the construction costs, would someday buy the building. The city of Verona kicked in $600,000 in tax incremental financing for construction costs.

The brewery’s tap room will open Friday, with Wisconsin Brewing’s four beers also being sold exclusively at Verona restaurants and bars at the outset.

On Nov. 4, the beer will appear in liquor and grocery stores, as well as bars and restaurants in a 22-county area stretching from the Fox River Valley to southwest Wisconsin, served by Sun Prairie-based Wisconsin Distributors.

Sales to the Milwaukee area are scheduled to begin in February or March with further territories to follow.

“Our branding really takes us statewide, really Midwest, really regional as we get bigger because of the way we branded everything,” Mark Nolen said. “Most of this plant here, all of this engineering, doesn’t have to be replicated. We just add tanks and some piping, and the cost (to expand) is much lower.”

The company has already ordered more fermentation tanks and has a business plan that spends $250,000 every quarter to buy kegs, which eventually will become the brewery’s largest single capital expense, Carl Nolen said. Kegs will be filled at the brewery, but tanker trucks, filled with 180 to 200 barrels of beer, will haul freshly brewed beer to the Stevens Point Brewery, more than 120 miles north, for bottling.

“Once we get over 20,000 (barrels), we will have the strategy in place to build that out and add the bottling plant,” Nolen said. “The go button is somewhere between 20,000 and 30,000 barrels where we just have to bring it back in-house.”

The brewery, which is next to a 9-acre pond, has a 12-tap tasting room that can accommodate 200 guests and has outdoor space for a beer garden with picturesque views. The brewery is positioned to attract 200,000 tourists a year, many of whom will also visit nearby cheesemakers, wineries and other breweries.

The Nolens — two of nine children in the family — grew up on Madison Street on the Near West Side. Their father, Pierce Nolen, owned The Congress, one of the city’s most famous Downtown watering holes.

Mark, 65, had stints with M&I Bank and Heritage Bank before he helped found Johnson Bank. Since 2009, he has worked as a consultant in the banking industry.

Carl, 56, got his start in the beer business delivering kegs to bars on State Street in 1978. His background includes working for beer distributors in northern and central Wisconsin, and working in management at then Coors Brewing Co. in Golden, Colo.

Both were surprised no one had laid claim to the Wisconsin Brewing Co. name.

“We needed a name that would support the strategic plan of the company,” Carl Nolen said. “We were excited to find the name. It’s simple, it’s clean and it’s who we are.”

Primary construction began in March, the brewing equipment began arriving in July, and the first test batches were out in September. Technology and automation are signature pieces of the operation.

Nelson, the brewmaster who spent 25 years at Capital Brewery, spends much of his time behind a bank of computer screens where, with a click of a mouse from inside a control room, he can regulate temperature, water flow and the addition of grains and hops to the brewhouse, made by German company GEA in Hudson.

Over the last year, Nelson, who still drives his 1987 BMW, has created four beers for this week’s launch.

He brewed and tested the recipes at the Great Dane and Vintage Brewing Co., where 2,500 glasses each of Bold & Robust Porter, WBC Amber lager, American IPA (India pale ale) and Session IPA were served.

“The only limit on potential is our imaginations,” Nelson said. “I have very fond memories at Capital, but this is really something.”

Wisconsin Brewing Co. is the latest addition to the booming craft beer industry.

The segment shows no signs of slowing and continues to eat away at market share from legacy brewing companies like Anheuser-Busch InBev and MillerCoors.

Driving the optimism by craft beer makers is the market share that nationally stands at about 6.5 percent of the 200 million barrels sold each year.

Getting the country's beer drinkers to consume one more craft beer a month would result in a 2.7 percentage point increase in market share, according to a report from Bart Watson, the Brewers Association's staff economist. He also notes that craft brewers' market share is strongest among younger drinkers.

"Even small changes in consumer behavior can dramatically reshape the landscape of the American beer market in a short time period," Watson wrote. "Together, these consumers and these producers are helping shift American beer culture."

Get your head in the Christmas shopping game early

Get your head in the Christmas shopping game early

The summer seasonal is another well-executed, easy-drinking beer from the 8-month-old Verona brewery.

A lawsuit brought by minority shareholders against Capital Brewery, led by its former brewmaster, Kirby Nelson, was dismissed Thursday after a judge ruled that the shareholders hadn't shown they have standing to sue.

The winning brew will be served at the Memorial Union on May 1 and distributed state wide.

Sun Prairie-based Wisconsin Distributors's purchase of River City Distributing is expected to be finalized by the end of March.

Rapid growth and new tax money from Epic Systems has led the school district to ask voters for a new high school and improvements to other schools.

Kirby Nelson, vice president and brewmaster at Wisconsin Brewing Co. in Verona, walks through a line of fermentation tanks. The brewery opened in 2013 and on Tuesday announced it will make an alcoholic root beer on contract for Illinois-based Small Town Brewery.

The founders of Wisconsin Brewing Co. bring decades of brewing and business experience to the operation. Brewmaster Kirby Nelson, left, is an award-winning brewer who spent 25 years at Capital Brewery. Chief financial officer Mark Nolen, center, has over 35 years of banking experience. His brother Carl Nolen is the former president of Capital Brewery.

Half-barrel kegs are stacked and ready for filling inside Wisconsin Brewing Co. Eventually, as production increases, the brewery will invest millions of dollars more in kegs.

Carl Nolen, president and CEO of Wisconsin Brewing Co., uses a forklift to position kegs to be filled with WBC Amber.