They do so in several rounds, and troubleshoot if their canister doesn’t catapult to the desired height. Maybe more water is needed, or less Alka-Seltzer.

It’s one of many summer camp activities and hands-on experiments offered by newly launched company and program Stellar Tech Girls.

The students, some girls and others who identify as nonbinary, then head inside the Stellar Tech Girls space on Frank Lloyd Wright Avenue in Middleton to both discuss the day’s activity and design rockets of their own. They later test them out using eggs or “eggstronauts.”

During the camp’s inaugural week, the students also built mini-cars, constructed circuits to drive a fan, erected towers and bridges and made ice cream and oobleck, a kind of slime.

It’s all meant to get the students excited about a potential career in science, technology, engineering and mathematics, or STEM, in a way that allows for failure and imagination, said founding director, aerospace engineer and former SpaceX employee Marina Bloomer.

The experience is especially critical as women remain an underrepresented demographic in each respective field.

And girls experience what Bloomer called a “drop-off point” as they go through school — they may express interest in a STEM career, but societal expectations and other factors might discourage that pursuit.

That conclusion is based on a report published by the Afterschool Alliance, a nonprofit seeking to increase access to after-school programs, about STEM after-school activities and engagement. The report found 72% of girls in the U.S. participated in programs in 2020, compared with 75% of boys.

Meanwhile, women are disproportionately represented in the fields of computing and engineering, according to figures from the Pew Research Center. Women make up 25% and 15% of the workforce in those industries, respectively.

Stellar Tech Girls, which this month won first place in the Business Services category of the Wisconsin Technology Council-hosted Governor’s Business Plan Contest, is Bloomer’s way to close the gap.

“The combination of Marina’s written plan and her concise, passionate presentation on stage in Milwaukee was compelling to the judges,” said Technology Council president Tom Still.

“At first glance, someone might be tempted to ask, ‘Stellar Tech Girls fills a void, but does it have potential to make money and be a sustainable, scalable business?’ I think the answer is ‘yes’ because the challenge of interesting more girls in engineering isn’t confined to Wisconsin. It’s national.”

Not only does the company offer summer camps for students ages 9-14, the startup will eventually have year-round after-school programming, and host STEM-themed events and parties. Attendees of the camps pay about $250 to participate in programming, but scholarship opportunities are available, according to the Stellar Tech Girls website.

Bloomer, who used her own money to get Stellar Tech Girls off the ground via bootstrapping, plans to work with school districts and other organizations in the area for now with the vision of expanding across Dane County within the next five years.

The founder is the sole employee besides some high school students she has hired to help out this summer with the camps that are to last until August.

Just opening Stellar Tech Girls has been Bloomer’s dream for some time, she said.

‘The only woman in the room’

Bloomer, a Chicago native, wanted to enter the engineering industry as early as high school, when she took advanced math and science classes. She moved to Madison in 2018.

In 2011, she received her mechanical engineering degree at Tufts University in Boston. Bloomer also has a master’s degree in aerospace engineering, a degree she obtained while at the Georgia Institute of Technology, and a master’s of business administration from UW-Madison.

She has previously worked as an engineer for Ohio-based GE Aviation and Elon Musk-owned SpaceX in California, as well as a propulsion program manager for the Nevada-based aerospace and national security contractor Sierra Nevada Corp. Sierra Space is a division of the company in the Madison area.

But as Bloomer progressed through her career, gaining more advanced positions at the companies she worked at, she noticed fewer women around her.

“I ended up being the only woman in the room a lot of the time,” Bloomer said, which further fueled her desire to help more women gain representation in STEM fields.

The idea for Stellar Tech Girls spawned as Bloomer went through schooling at UW-Madison.

“She is one of those entrepreneurs who is focused on solving an important problem — the low number of women in engineering — and does a great job of building a team and making things happen,” said Dan Olszewski, Goldberg Family director of the Weinert Center for Entrepreneurship at the Wisconsin School of Business and mentor to Bloomer.

“She and her team worked on this startup in our graduate capstone entrepreneurship class. It was a real pleasure to see the continued progress they made each week to develop such a strong program.”

While the COVID-19 pandemic put that idea on the back-burner for a while, Bloomer said she buckled down on her business plan as soon as vaccines became available and signed the lease for her space last winter.

“Stellar Tech Girls will be a household name in Madison for all parents,” Bloomer said of how she envisions the future of her business.

Milwaukee-based Rapid Radicals Technology was the grand prize winner. The company can treat water at a municipal scale.

“Rapid Radicals was born of a flood in Milwaukee that frustrated homeowners, businesses and city officials alike,” Still said. “At a time when the resiliency of municipal water systems is vital, our judges saw the value of Rapid Radicals’ ability to dramatically speed up the cleaning of effluent.”

The business has created an over-the-counter pet product for itch relief called Dermigan. Packets are sprinkled on top of the pet’s food daily.

And taking the Information Technology category was HeyGov in Sturgeon Bay. The company provides online government management software in a mobile suite.

DotCom Therapy’s acquisition of Wolf+Friends comes on the heels of the startup’s goal to close gaps in access to mental health treatment for children with conditions like Autism Spectrum Disorder and Attention Deficit Disorder, among others, said founding CEO Rachel Mack Robinson.

Madison's Amulet is a startup that has worked since 2016 to put the science of food allergen detection into the hands of the everyday consumers via wearable sensor that can test for allergens like soy and peanuts in a minute.

Inflation is a "sustained increase in the growth rate of the general price level," explained Menzie Chinn, professor of public affairs and economics at UW-Madison.

A business model that allows workers to have a stake in how their employer pays and supports them while also tackling social issues is gaining traction in Madison and statewide.

A fire Thursday involving trash and recycling bins caused $40,000-$60,000 damage to a South Side home, the Madison Fire Department reported.

A recent Wisconsin Policy Forum report states that 52.7% of white adults own the homes they occupy in Madison. Only 30% and 15.3% of Hispanics and Black adults, respectively, own their homes.

MilliporeSigma, a company that makes ingredients used in various pharmaceutical drugs, Wednesday unveiled its expanded Verona space to help meet rising demand for a compound used in cancer treatments that can serve as an alternative to chemotherapy.

Tips for buying your first car amid historic shortages

Tips for buying your first car amid historic shortages

How you can maximize your credit card rewards points

How you can maximize your credit card rewards points 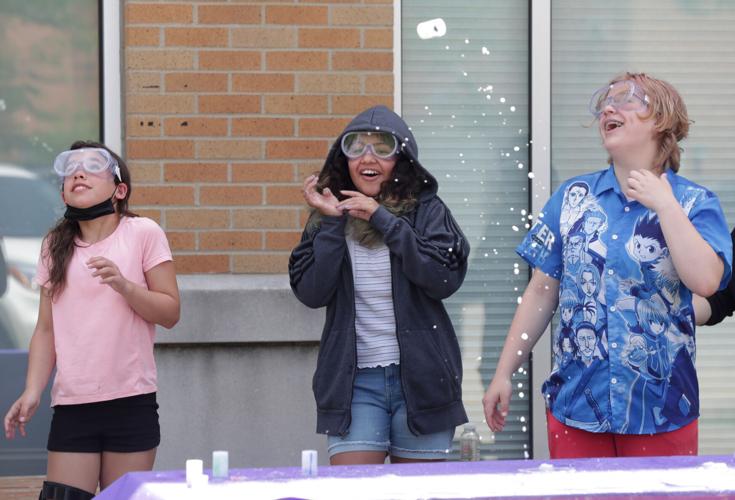 From left, Tabitha Goldberger, 10, Camila Fernandez Adamae, 11, and Vee Schwartz, 13, react as they perform a rocket propulsion experiment using Alka-Seltzer and water in a film canister during summer camp at Stellar Tech Girls in Middleton. 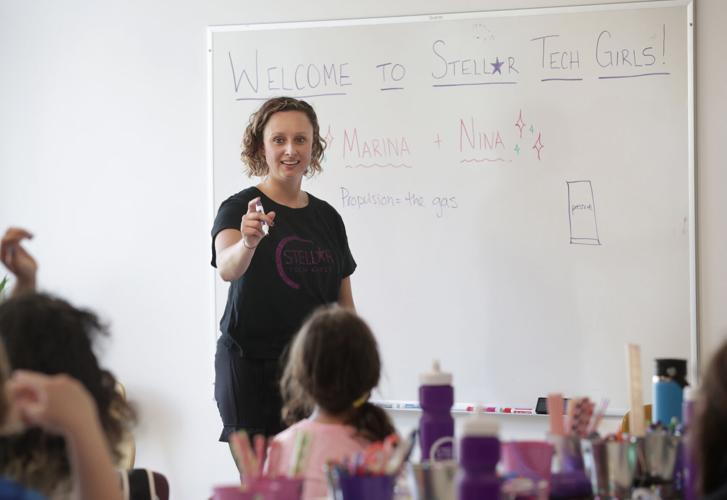 Marina Bloomer, founder of Stellar Tech Girls, talks with summer camp participants about an experiment they did outside, in the classroom in Middleton. 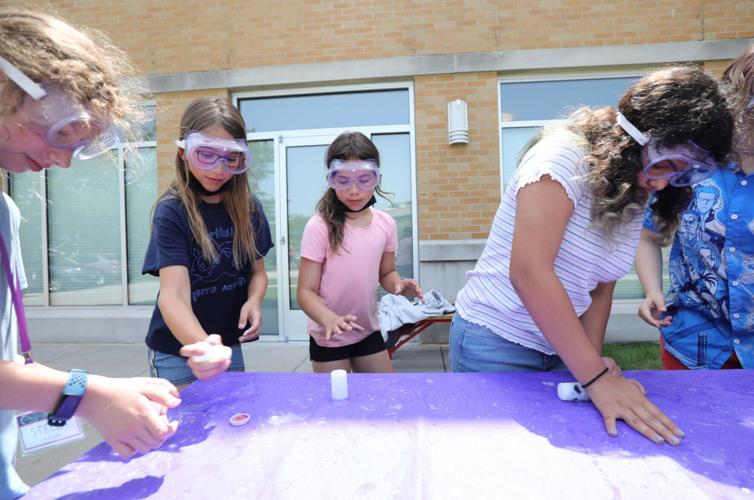 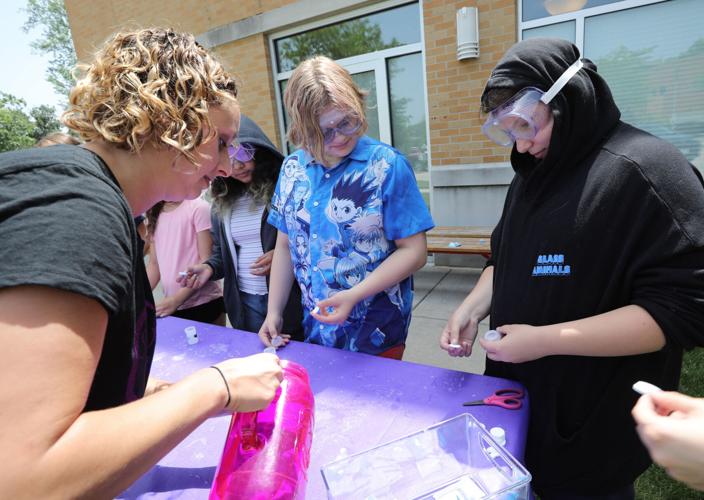 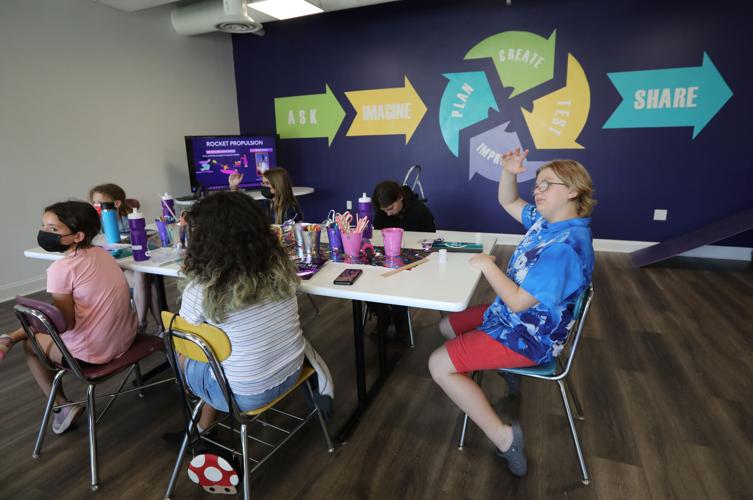