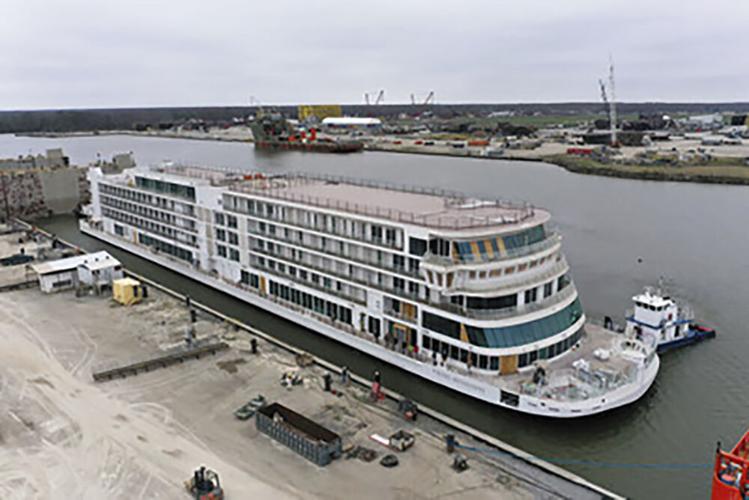 Viking River Cruises of Basel, which announced plans for Mississippi River cruises in 2015, celebrated the “float out” of the Viking Mississippi on Monday at Edison Chouest Offshore’s LaShip shipyard in Houma. 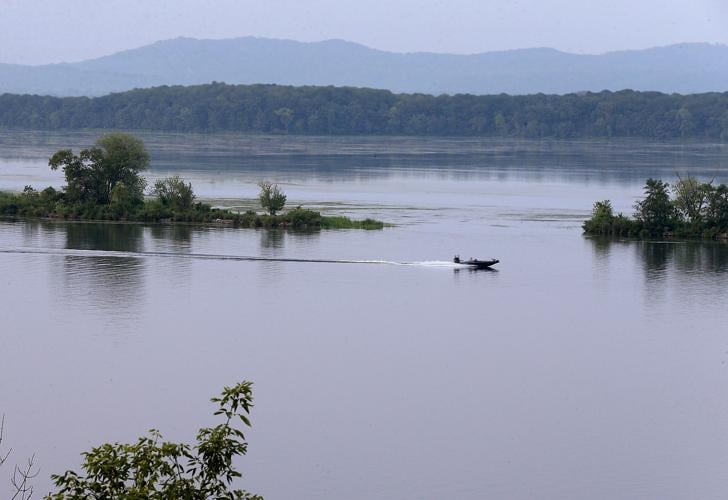 A boat is seen on the Mississippi River from Highway 61 north of La Crescent.

HOUMA, La. — A Swiss company’s plan to offer tourists cruises along the length of the Mississippi River drew a step closer to reality this week as its new 386-passenger ship was floated out of a south Louisiana shipyard.

Viking River Cruises of Basel, which in 2015 announced the plans for Mississippi River cruises, toasted the completion of the Viking Mississippi in a celebration Monday at a Houma shipyard.

Two U.S. companies already offer cruises up and down the river, which flows 2,350 miles from its source at Minnesota’s Lake Itasca to the Gulf of Mexico. American Queen Voyages, of Fort Lauderdale, Florida, and American Cruise Lines, based in Guilford, Connecticut, expect to carry a total of 50,000 people on the Mississippi this year, spokespeople said.

The Viking Mississippi is billed by the Swiss competitor as “the largest and most modern ship in the region.” It is to make its first voyage in June between New Orleans and St. Paul, Minnesota — a trip that would take about 1,200 miles by car but is about 1,700 miles on the twisting river.

“It is a proud moment that this new ship has met an American waterway for the first time,” Torstein Hagen, chairman of Viking, said in a statement. “Our guests have long wanted to sail the Mississippi River with Viking, and we very much look forward to welcoming them on board this summer.”

Company officials said the Viking Mississippi is expected to draw more than 7,500 passengers to the river this year and more than 17,600 during the first full sailing season in 2023.

Meanwhile, American Queen Voyages has three paddlewheel cruise boats that operate on the Mississippi, the smallest able to carry 166 passengers and the largest 417, spokesperson Michael Hicks said. He added that the company expects about 20,000 passengers on the Mississippi River this year.

American Cruise Lines has two paddlewheelers and three modern riverboats on the river and plans to launch a fourth modern riverboat late this year, spokesperson Alexa Paolella said. Both also operate in other parts of the United States. She said the boats will carry 30,000 on Mississippi River routes this year.

American Cruise Lines’ 15 river and coastal cruise ships all were upgraded during the off-season, with the most extensive work on the line’s four paddlewheelers, a company news release said Wednesday.

“Viking’s boat will also be lovely, but American Cruise Lines’ new modern series riverboats are equally if not more beautiful,” Paolella wrote in an email.

Can a team with 3-point shooting as bad as Wisconsin's win it all? Here's what 20 years of data says

The Badgers have defied expectations all season. Here's why they'll need to do it again in the postseason and what Greg Gard and UW men's basketball players said about their shooting performance this season.

The city and county are proposing to locate a men's homeless shelter on the site of a demolished sports pub at 1902 Bartillon Dr., just off Highway 51 between East Towne Mall and Madison Area Technical College.

Jim Polzin: Bringing back Aaron Rodgers makes sense and other thoughts from a busy day in Wisconsin sports

Lee Sports Wisconsin columnist Jim Polzin weighs in on Aaron Rodgers returning to the Packers, Russell Wilson heading to the Broncos, Johnny Davis and Greg Gard winning major awards and why some All-Big Ten voters got it wrong.

Is Aaron Rodgers' new deal structured in a way that it’s essentially a year-to-year proposition? Would it allow for Rodgers to contemplate retirement each offseason, while also pushing Green Bay to go “all-in” each year he plays?

Even with Aaron Rodgers returning to Packers, backup Jordan Love appears unlikely to be dealt

What’s next? With Aaron Rodgers returning and Davante Adams tagged, Packers have work to do

With Aaron Rodgers still on the books with his existing deal, the Packers are sitting roughly $30 million over the $208.2 million salary cap, which they have to be below when the new league year officially begins next Wednesday.

Officials are still calculating the extent of damage from Saturday's storm.

Viking River Cruises of Basel, which announced plans for Mississippi River cruises in 2015, celebrated the “float out” of the Viking Mississippi on Monday at Edison Chouest Offshore’s LaShip shipyard in Houma.

A boat is seen on the Mississippi River from Highway 61 north of La Crescent.