MONROE — The fall harvest was in full swing last week on the fertile and rolling topography of rural Green County.

Combines crawled across the landscape, trucks full of corn and soybeans scurried about and, in some spots, county work crews began installing a wooden snow fence.

Thursday appeared to be a picture-perfect day. But for some, there was shock, dismay, sadness and uncertainty.

A 110-year-old cooperative of farmers is looking for a new market for its milk, and an award-winning cheese company is shutting down its plant after stalled contract negotiations with the co-op and volatility in the dairy industry created by COVID-19. It also leaves the fate of one of the top cheeses in the world in limbo, but with the potential for a new group of cheesemakers to take over the existing facility.

Maple Leaf Cheesemakers, located just south of Monroe in the hamlet of Twin Grove, announced last week that it will cease production at the plant in early December, although it will continue to make much of its Monterey Jack, smoked Gouda, cheddar and white cheddar with cranberries, cherries and blueberries at other contract facilities. However, that production won’t include Maple Leaf’s award-winning English Hollow cheddar, named in March to the list of 20 finalists at the World Championship Cheese Contest in Madison.

The cheesemakers only own the equipment inside the plant, however. The 15,000-square-foot building, the land and the seven stainless steel whey and milk tanks that tower above the facility are owned by the farmers cooperative, Maple Leaf Cheese Cooperative, a collection of 25 farms that had been providing 3.5 million pounds of milk a month to the company, which creates 400,000 pounds of cheese a month.

Shirley Knox, president of Maple Leaf Cheesemakers, said the options for her company include moving the equipment to a new facility where it could continue to make English Hollow or selling the equipment and having the cheese made at another facility.

Knox said she has scores of the 28-pound wheels of English Hollow aging in a Monroe facility and, for now, is not worried about a lack of product for her buyers. The 35 employees at the cheese plant will be offered jobs at two Monroe companies at which Knox is part owner, Alpine Slicing and Cheese Conversion Co. and at Cheese Louise, which specializes in smoking cheese.

“My heart is very heavy. This is a very difficult time in more ways than one,” Knox said. “The agreement just wasn’t working anymore. Are we going to make (English Hollow) again? Oh, jeez, I hope so. It’s our star.”

The basic terms of the existing agreement between the cheesemakers and the co-op were established in the 1990s. But since that time there have been wild fluctuations in milk and cheese prices, consolidation in the milk industry, the closure of thousands of farms around the state and rising costs for both cheesemakers and farmers. Both sides had been working for the past year to reach an agreement but negotiations halted in April. Both sides now say they believe the change could be beneficial for both parties.

The co-op, which has been losing money, is now looking for a temporary home for its milk but ultimately would like to resume production at the Twin Grove plant and is reaching out to other cheesemakers. The goal is to create a business model that provides more money to farmers and offers a sustainable plan for the cheesemakers.

“We just weren’t able to keep up with the co-op bills and we knew something had to change,” said Bob Bade, who milks 53 cows on Bethel Road just south of Monroe. “We kind of knew something like this could happen, but we weren’t ready for it, that’s for sure. But we were going to have do something eventually anyways just to pay the bills at the co-op and pay the farmers a fair price.”

Monroe relishes its cheese history and celebrates every two years with Cheese Days on the county courthouse square. Out on Highway 69, the National Historic Cheesemaking Center Museum celebrates the rich traditions of cheese in Green County, which at one time had over 300 cheese plants. Today there are just 12. The agreement between the Maple Leaf Cheese Cooperative and the Maple Leaf Cheesemakers is also a throwback, but one that has allowed small farms to be a part of the cheese industry, said Will Hughes, a longtime manager at the state Department of Agriculture, Trade and Consumer Protection.

“The bottom line on the co-op side of the business, and trying to balance paying out to farmers, was out of whack and we were trying to fix that,” said Hughes, who has been working as an adviser with the co-op since June 2019. “These arrangements that existed throughout our history in our state were totally valid and good and innovative at the time, but you’ve got to take a fresh look as you move forward today.”

The co-op, established in 1910 and now with some third-generation farmers, has worked with a number of cheesemakers over the years, and for much of its history the plant was on Highway 59 between Monroe and Albany. In 1994, the cheesemaking moved to Twin Grove, just a few miles north of the Illinois state line where, in 1996, longtime master cheesemakers Jeff Wideman and Paul Reigle created Maple Leaf Cheesemakers. Knox, who joined the company in 1999, said the decision to close the plant was based on economics after the closure of specialty cheese shops earlier this year and a dramatic drop in demand from higher-end food-service distributors.

“No business has made it through (the pandemic) without being affected. It’s really been difficult. We’ve never experienced anything like this,” Knox said. “Maple Leaf Cheesemakers will continue as a company. We’re not stopping.”

For Bade and other farmers in the co-op, cheese production at Twin Grove is a way to remain viable. The farmers, who hail from communities like Blanchardville, Oregon, Albany, Juda and Monticello, milk anywhere from 50 to 300 cows a day, relatively small operations by today’s standards. Bade’s story as a farmer is also filled with passion, family and risk.

He grew up on a dairy farm that was established more than 150 years ago northeast of Peoria, Illinois. His parents still run the operation, but it’s one of only two dairy farms remaining in all of Marshall County, Illinois. After graduate school at UW-Madison, Bade, 38, spent time with BouMatic and then worked with robotic equipment for GEA Farm Technologies, a position that put him on the road 150 days a year. But in 2011, Bade purchased five acres that included a 1904 farmhouse and barn and several outbuildings rebuilt after a devastating tornado in the late 1960s. He later purchased another 35 acres bisected by Honey Creek and in 2013 began milking just 14 cows.

His wife, Liza, works full-time in a medical lab in Monroe, and the couple have twin 3-year-old daughters. Bob Bade said he’s able to cover his farm costs with his operation, but would be unable to make it financially without his wife’s income and medical insurance.

Co-op members hope to restart the cheesemaking facility by this spring, but Bade knows it will be a big investment that will require the right type of agreement with a new cheesemaker.

“It’s going to be a balancing act because we need to move the milk, but we also need to get a fair price for it to keep our farmers around,” said Bade, who has been on the co-op board for the past five years. “They can’t afford to take less than market (price).”

Jim Kalscheur built a meat empire but generosity was his calling, especially to Badgers sports

Pine Bluff native and Mount Horeb High School graduate Jim Kalscheur was a major supporter of University of Wisconsin Athletics but also youth sports, history and those with disabilities. 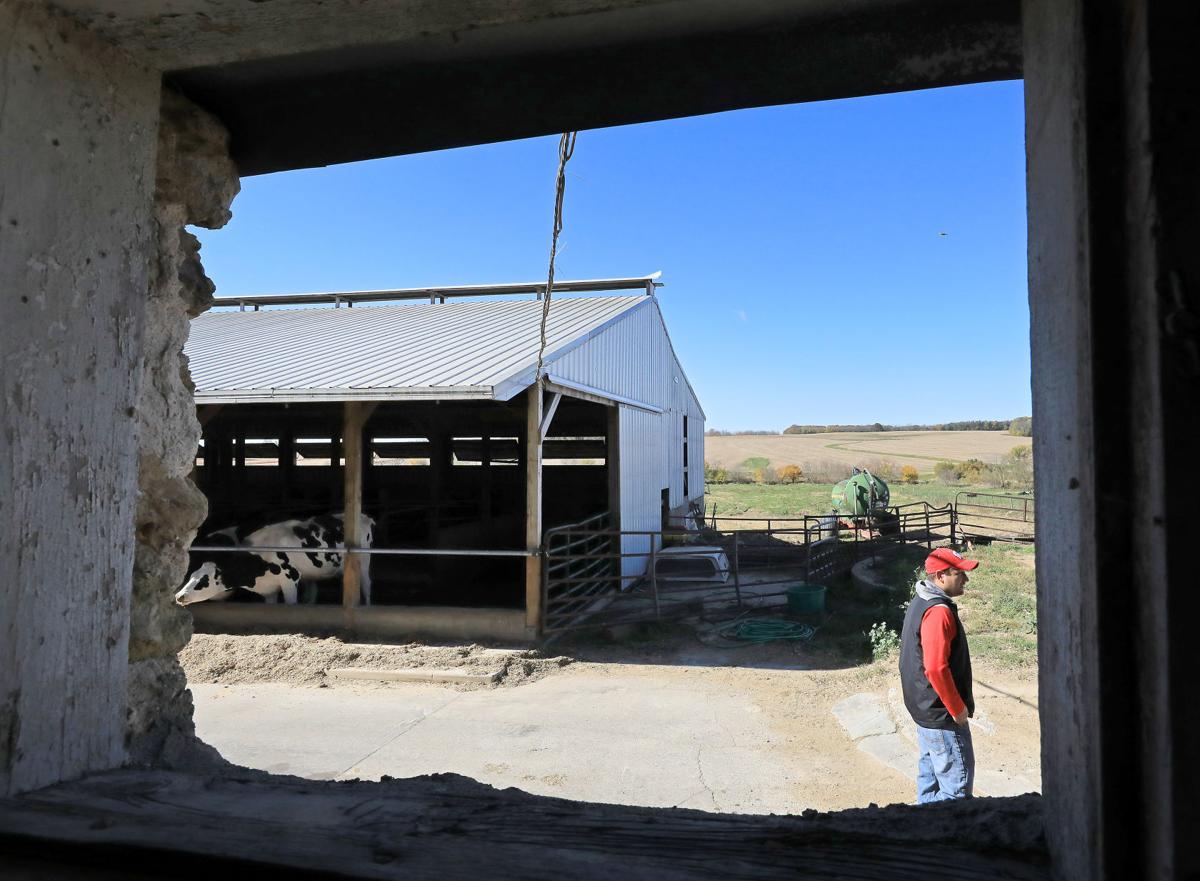 Bob Bade is one 25 members of the 110-year-old Maple Leaf Cheese Cooperative, which is now looking for a new home for its milk. The co-op was informed last week that Maple Leaf Cheesemakers in Twin Grove would stop making cheese at the plant and will no longer need the co-op's milk. 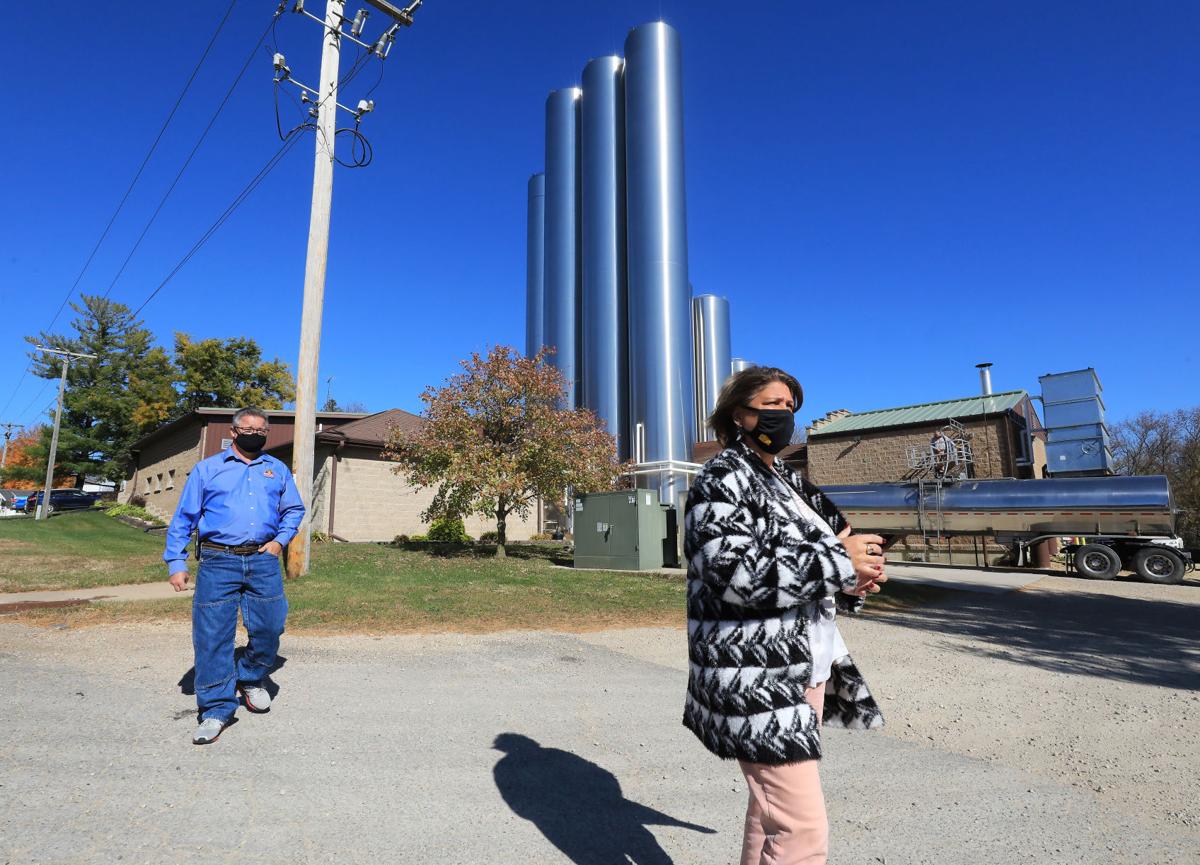 Shirley Knox, president of Maple Leaf Cheesemakers, and Paul Reigle, the company's master cheesemaker, at the Twin Grove plant. The company will soon outsource most of its production to other plants. 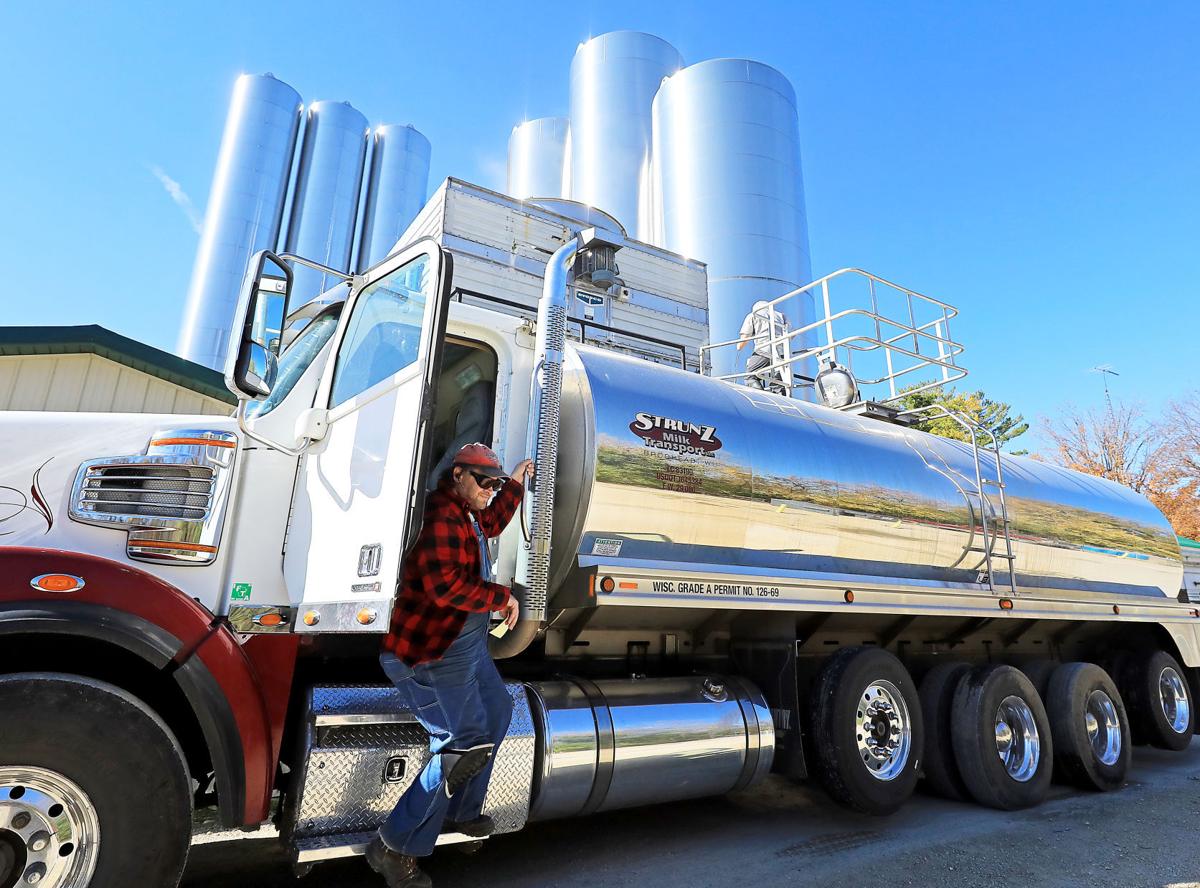 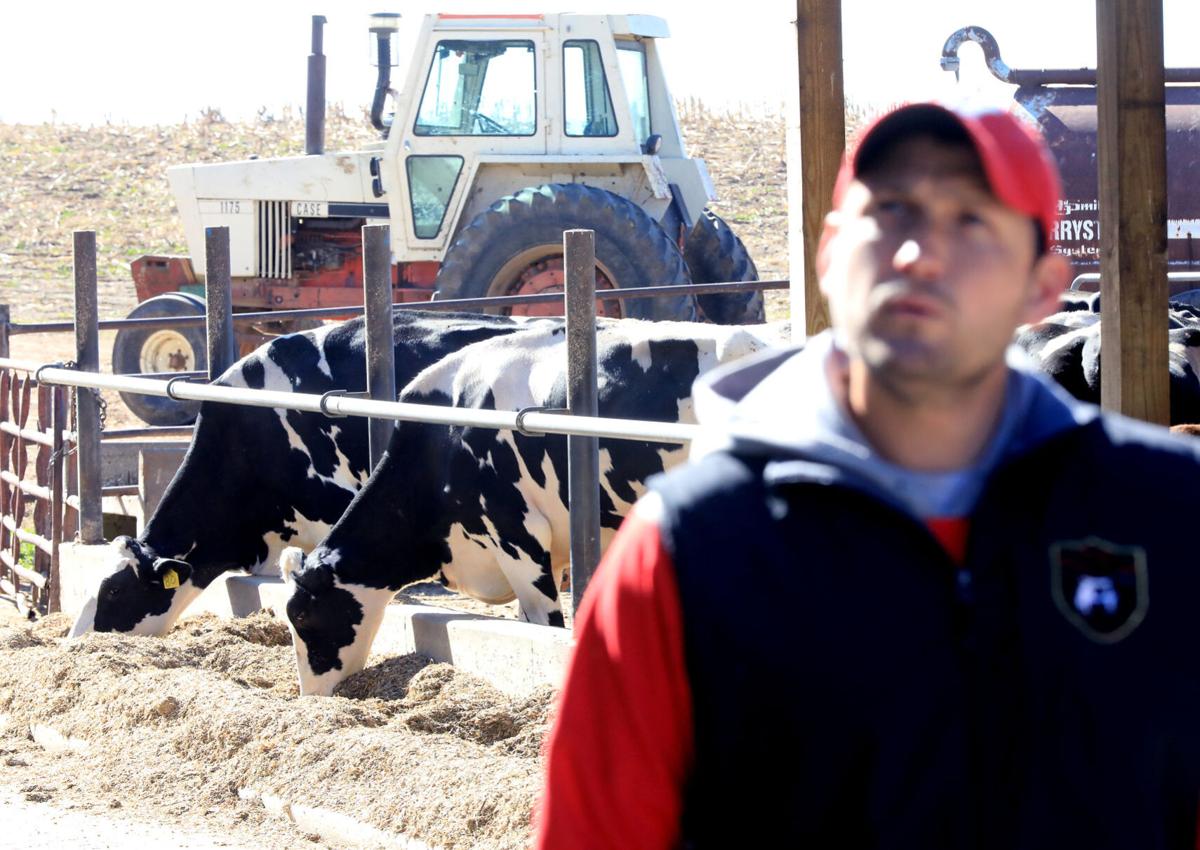 "We kind of fell in love with the area," Maple Leaf Cheese Cooperative member Bob Bade said. "It's a nice view. Where I grew up it's all flat." 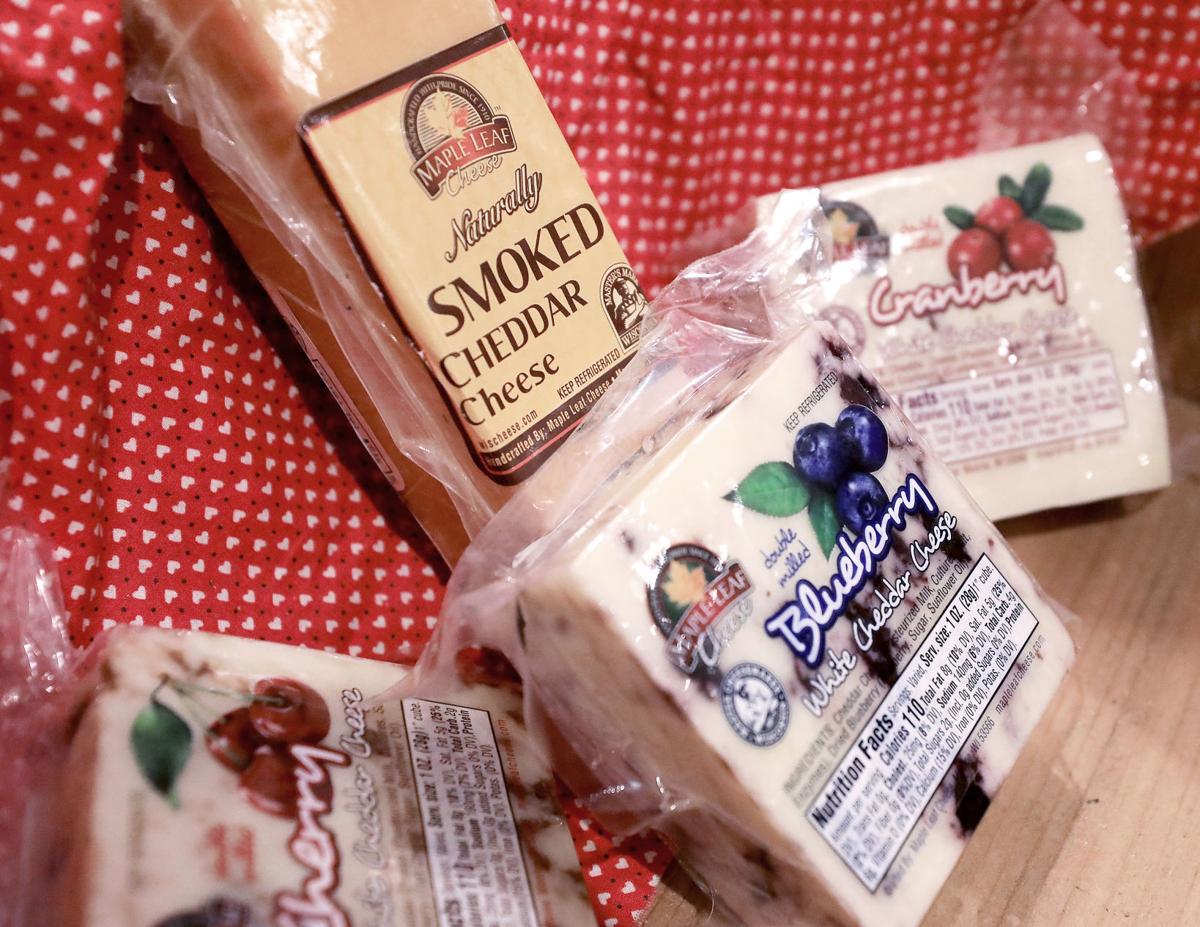 Samplings of cheeses made by Maple Leaf Cheesemakers at Alp & Dell Cheese Store in Monroe. 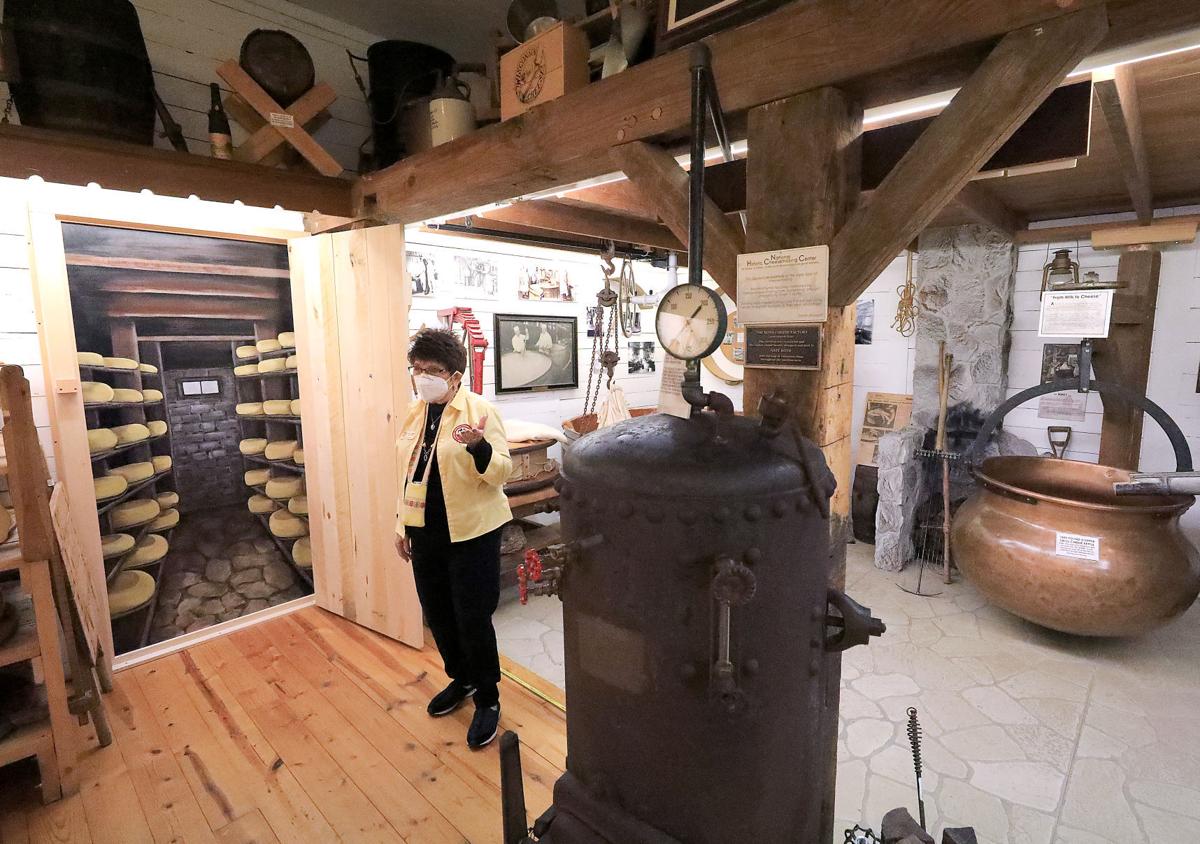 Donna Douglas, executive director of the National Historic Cheesemaking Center Museum in Monroe, shows off some of the history of cheesemaking in Green County. At one time the county had 300 cheese plants. Today there are just 12. 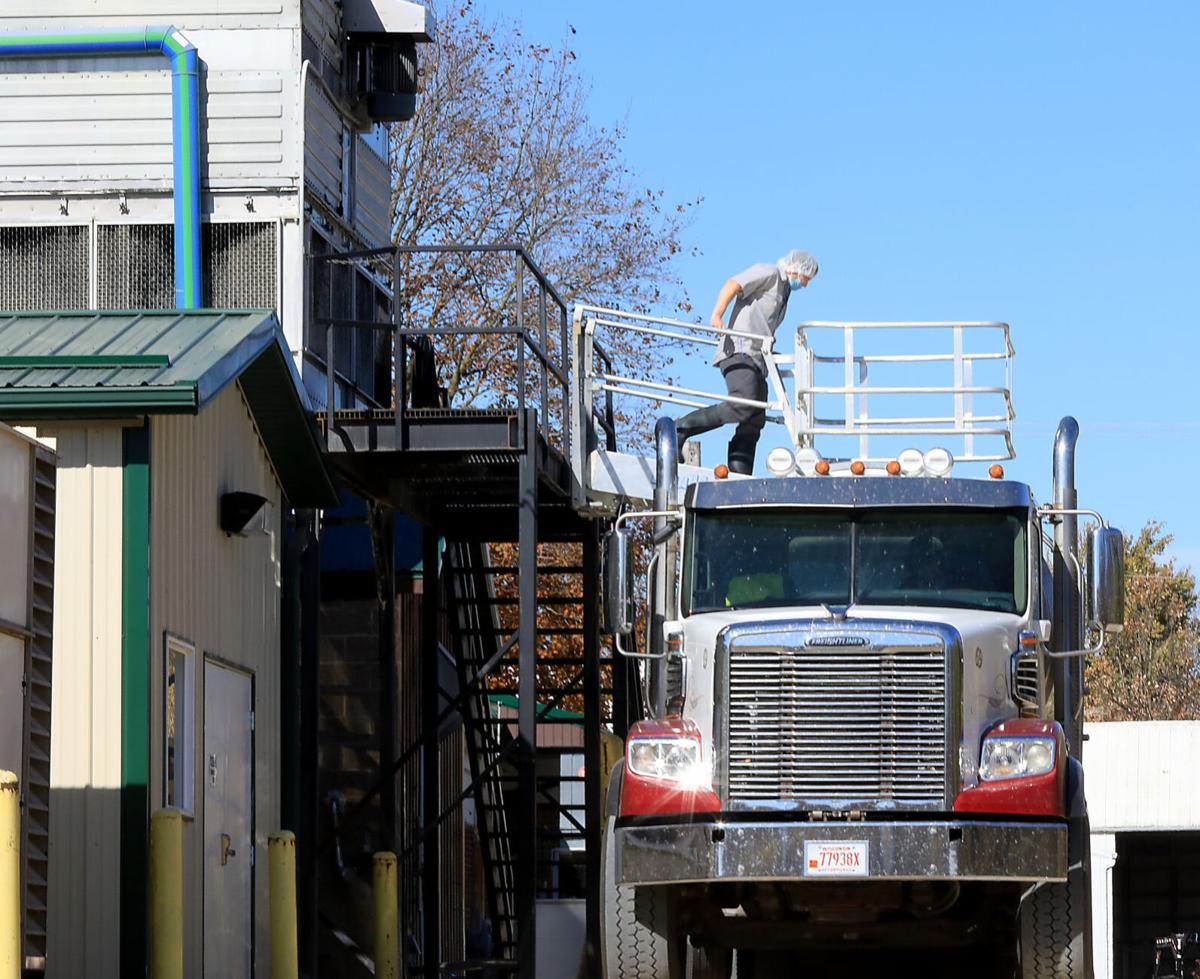 A worker from Maple Leaf Cheesemakers prepares to draw a sample from a milk truck that had just arrived at the plant in Twin Grove. 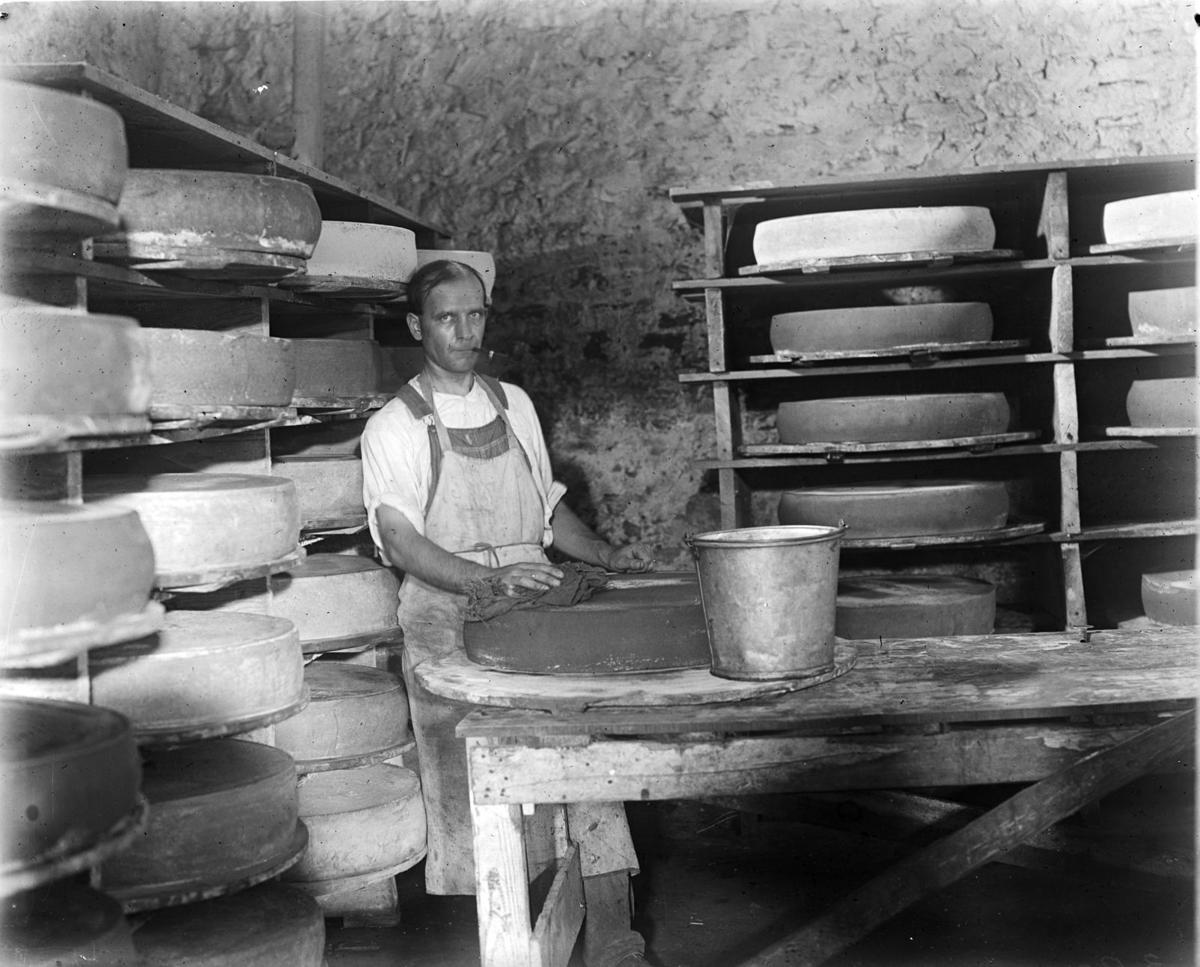 Fred Baertschi was the first cheesemaker at the Maple Leaf cheese factory when it was located between Monroe and Albany. The factory began operations in 1910. 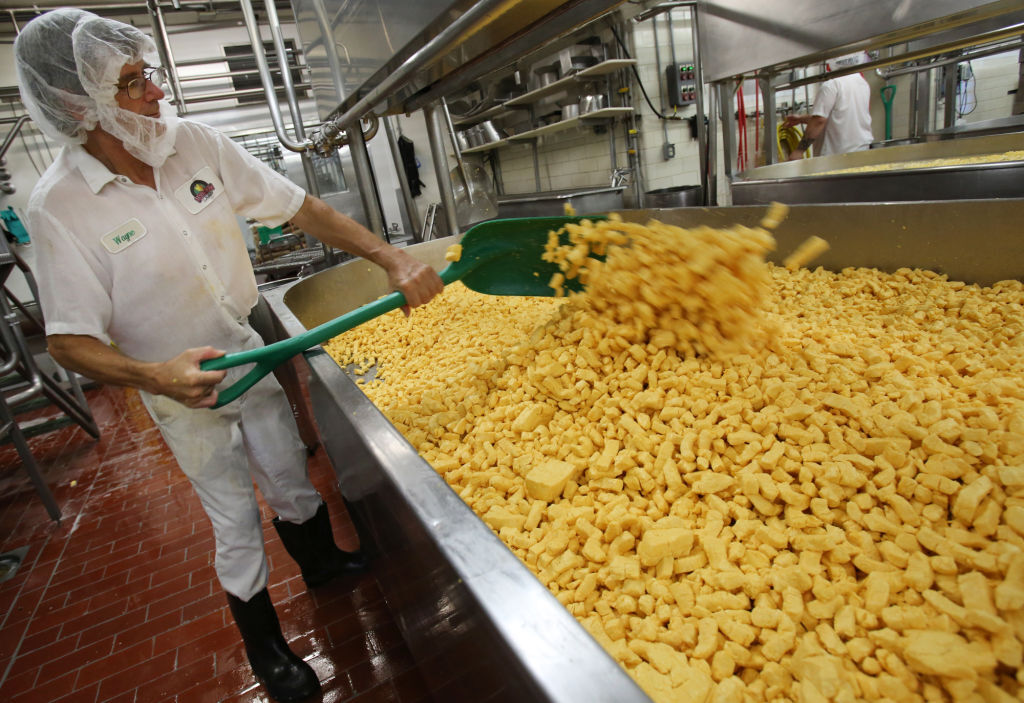 A worker at Maple Leaf Cheesemakers near Monroe works with a batch of cheddar in 2014. Access to the plant is now limited due to COVID-19 concerns.