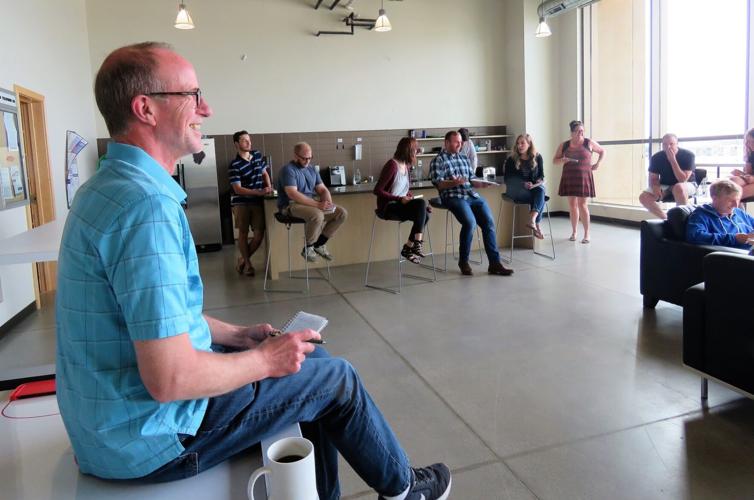 InfoSec employees gather in a breakroom at the company for a Friday afternoon trivia contest in the days before the pandemic in March 2020. 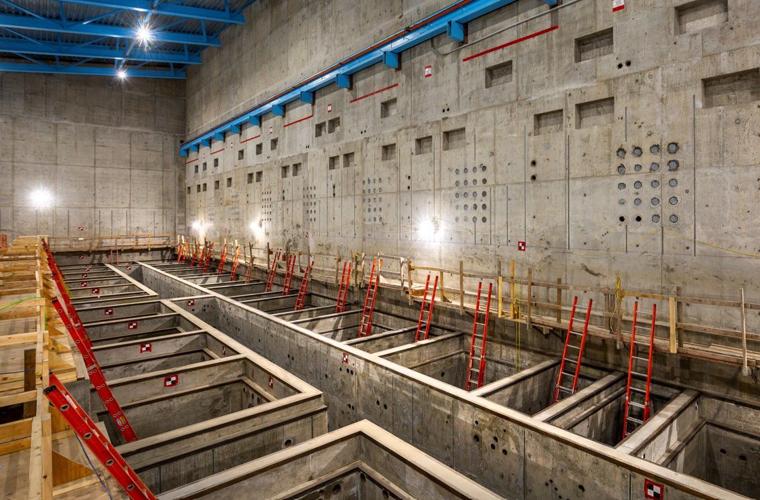 Construction on the SHINE Technologies Janesville production facility is slated to fully finish in 2023. A subsidiary is building a facility in the Netherlands.

A Boston-based education technology company with a presence around the world announced an agreement last week to “join forces” with a Madison cybersecurity training institute for $190.8 million.

Founded 100 years ago, Cengage Group’s acquisition of the InfoSec Institute will help the firm expand into the fast-growing cybersecurity professional training market. The transaction is expected to close in the first quarter of 2022, subject to regulatory approvals.

But beyond that, the deal comes as talent shortages run rampant across industries, and as demand for skilled tech labor goes up, especially with businesses turning to permanent remote work and hybrid office structures, said Cengage CEO Michael Hansen.

There just aren’t enough cybersecurity professionals to help companies embrace the new workplace model safely, he said, adding that attacks spare no one.

Recent cyberattacks have targeted gasoline pipelines, hospitals and even grocery stores — and have led to everything from supply chain disruptions to critical data breaches.

Last October, a cyberattack shut down Wisconsin’s own cheesemaker Schreiber Foods for a few days.

The U.S. Bureau of Labor Statistics identified the information security analyst job as the 10th-fastest-growing occupation over the next decade — a rate of 31%. And in 2021, investors put more than $12.2 billion into startups that sell products similar to that of InfoSec’s, according to a New York Times report.

InfoSec, founded in 2004 by CEO Jack Koziol, has educated 5 million people (individuals and organizations) about how they can become more resistant to cyberattacks.

The company has also trained about 100,000 cybersecurity professionals since launch. The firm, which employs 100 people, has offices Downtown, as well as in Chicago.

Cengage Group, with 4,000 employees and an annual revenue of $1.3 billion, provides postsecondary and online continuing education courses to the hundreds of community colleges and universities it partners with, Hansen said.

No InfoSec employees will face job changes or terminations as a result of the buy, Hansen said, nor will their branding change. Cengage will instead allow InfoSec to promote its services internationally, he said.

“Infosec was built by talented employees who truly believe that knowledge is power and care deeply about creating training materials that help cybersecurity professionals advance in their careers and keep employers and staff aware of cybersecurity threats at home and at work,” Koziol said of how the deal benefits the institute in a statement last week. “Cengage Group has the same level of passion for making learning accessible, affordable and applicable to today’s cybersecurity professionals.”

The institute is expected to join Cengage’s “ed2go” business, which is part of the company’s “Workforce Skills” arm and offers digital courses for college students, Hansen said.

Hansen anticipates that InfoSec will be a major driver of Cengage’s growth over the next decade, as what is now a $1 billion industry has the potential to expand 10 times by 2027.

Cengage combed through “hundreds” of company profiles before making the decision to pursue InfoSec, he said.

“InfoSec has a highly regarded product in the (cybersecurity training) market,” Hansen said, adding that the Madison company has often sold their products directly to employers, which is a distribution channel that’s complementary to Cengage. “We were very impressed by the quality of the (employees).”

One of the first stories I wrote this year for the Wisconsin State Journal wasn't published last January, but instead at the beginning of September — when I officially took my post as business reporter.

It was about a biotech startup that won the Greater Madison Chamber of Commerce's Pressure Chamber contest for the novel ways it was looking to prevent cancer — and a coronavirus infection. The week I wrote that piece was when I discovered the treasure trove of story ideas that made up Madison's business community.

For example, the pandemic has spotlighted how partnerships are have seemed to be a favorable strategy for organizations looking to solve complex issues.

I covered that in an article regarding the State Street pop-up shops, or Culture Collectives. Several organizations came together to fill two vacant storefronts in the Downtown corridor, and simultaneously help minority business owners get their venture off the ground.

More ideas were spawned as I saw how Madison's businesses continue to navigate hiring challenges, supply chain shortages and other trials.

But through all that, there's been an apparent optimism for the future.

That's showcased in how Fitchburg biotech giant Promega has conceptualized a way to detect coronavirus particles in wastewater, as well as how Madison biofuel company Virent aided in United Airlines piloting an aircraft using renewable jet fuel for the first time.

When UW-Madison oncology fellow Johnathan Ebben founded Nano RED in 2015, the startup’s focus was to conceptualize cancer treatments. That cha…

Willy Street Co-Op on Madison’s East Side was bustling with shoppers one week last October, but several shelves typically full of canned veget…

It has an odor, it flows through your pipes, and you might not even notice it’s there after you flush it down.

Madison-based startup that makes fuel out of plants for cars and airplanes is propelling United Airlines in its effort to combat climate change.

Emilie Heidemann is a multimedia journalist for the Wisconsin State Journal. She joined the team in August 2021 to primarily cover economic issues, tech and businesses in the greater Madison area.

United Way of Dane County will receive a $5 million gift from American Family Insurance — the largest corporate donation the social services organization has obtained in its 100-year history.

For new parents out of the Sauk Prairie Healthcare Birth Center, the cloud-based ConnectedCare application aims to provide forms for appointments, as well as educational materials and assessments pertaining to pregnancy and newborn care — all on a mobile device.

With goals to unionize, Raven Software workers turn to national labor board

An aspiring union that includes 34 workers who ensure the quality of video games for Middleton-based developer Raven Software has turned to the National Labor Relations Board after parent company Activision Blizzard did not meet the group's Tuesday deadline for voluntary recognition.

American Girl is later this year planning to move its Middleton corporate offices to elsewhere in Dane County. The company is also consolidating warehouse operations at its DeForest distribution center, and across two other U.S. facilities.

American Family Insurance, along with the company's Dreams Foundation, plans to invest $2.5 million into the south Madison Center for Black Excellence and Culture development.

SHINE Technologies has signed one of the "first-ever" contracts through the Department of Energy to expand the safe and domestic production of a material used in over 40,000 diagnostic medical procedures each day.

Wisconsin's college graduation rates have improved and have surpassed the national average, but a new report shows there are significant gaps between racial groups.

Kohl's says that recent offers to purchase the department store chain undervalue its business and that it is adopting a shareholder rights plan to head off any hostile takeovers.

Snowy afternoon could lead to slippery commute for southern Wisconsin

A quick burst of light, powdery snow is expected to overspread much of central and southern Wisconsin between about 2 p.m. and 5 p.m. Friday, likely reducing visibility and causing slippery roads.

United Way of Dane County unveiled its 2022 investment decisions Tuesday. Over $22.3 million is going to local programs that tackle problems like access to housing and educational opportunities, as well as racial health disparities.

While anyone can apply to be part of the Green Bay Packers Mentor-Protégé program, businesses owned by women, people of color, veterans and people with disabilities are especially encouraged to participate.

Madison-based American Family Insurance announced Wednesday the company is raising its minimum hourly wage from $20 to $23 as businesses across Dane County continue to grapple with workforce challenges amid the COVID-19 pandemic.

A commercial drivers license is needed to operate a semi-truck, the heavy machinery used during construction projects, and even buses.

In 2000, 17.8% of all employed Wisconsinites were members of a union — the 10th largest concentration in the country, according to the report. Last year, that percentage fell to 7.9%.

Some businesses say they feel relief and optimism as Public Health Madison and Dane County's mask mandate is poised to expire Tuesday. Others think the expiration is "premature."

Nichole Crust is the new director of gBETA Urban League, a program of Madison-based startup promoter gener8tor and the Urban League of Greater Madison that seeks to help Black-led businesses reach their growth potential.

US economy shrinks for a second quarter, fuelling recession fears

US economy shrinks for a second quarter, fuelling recession fears

InfoSec employees gather in a breakroom at the company for a Friday afternoon trivia contest in the days before the pandemic in March 2020.

Construction on the SHINE Technologies Janesville production facility is slated to fully finish in 2023. A subsidiary is building a facility in the Netherlands.