At one of the panelist’s urging, they also confronted an uncomfortable reality for the Republican Party: The ability to convene in a physical space dedicated to Republican outreach in Milwaukee was almost brand new. The center opened five months ago; the other Republican Milwaukee field office opened about two years ago.

“I’ve seen the Democrats who would come in and come all over our area,” said panelist Marty Calderon, a pastor and founder of God Touch Milwaukee. “Now to see that you get to have an office here is a great thing. But now to see more of the boots on the streets, because I know that on this side of town ... they were given a one-sided story.”

In the past few decades, Dane and Milwaukee County voters have almost only chosen Democrats in statewide races, which political experts attribute partially to a lack of Republican efforts in cities as well as policy positions and rhetoric that often earn them suburban and rural votes at the expense of urban ones.

But Republicans are seeking to make headway in cities through grassroots offices specifically aimed at attracting voters of color as well as messaging about rising prices, crime and education — issues where urban populations often face worse outcomes than other Wisconsinites.

Integral to their strategy is blaming Democrats for urban constituents’ problems, and casting Republicans as the party that can provide solutions.

“While Democrats continue to support policies that hurt communities of color, Republicans are dedicated to spreading our message, sharing our values, and making inroads to foster change and grow our party,” Republican National Committee spokesperson Rachel Reisner said.

Since 2000, Milwaukee and Dane counties have chosen Democratic candidates in every U.S. Senate, presidential and gubernatorial race, many times by 2-to-1 margins.

The sole, somewhat recent exception to Democrats sweeping the biggest Wisconsin counties’ votes is former Gov. Tommy Thompson, who is weighing another run for governor with a decision expected in April.

Longtime Republican lobbyist Bill McCoshen, who managed Thompson’s campaign in his 1994 reelection bid, said Thompson’s earlier success came from spending an “inordinate” amount of time in both Dane and Milwaukee counties during his campaign — something Republicans don’t do as much today.

“These are two crucial counties, not only for Democrats but for Republicans,” McCoshen said. “They’re two of our top three vote-producing counties, yet we don’t invest the resources necessary and use the right messaging to bring people to our side.”

Democratic U.S. Senate candidates want more rural votes. Can they get them?

“We just somehow don’t bother to speak to them, and it’s a mistake,” he continued.

In 2020, Dane and Milwaukee counties registered over 364,000 more votes for President Joe Biden than Trump. Biden’s victory margin statewide was about 21,000 votes.

“Republicans have been talking about urban areas as places that represent what Wisconsin should not be like” for the benefit of appealing to rural and suburban voters, Chergosky said. “I think, rhetorically, they will need to make a shift if they’re going to appeal to the voters in urban areas.”

Vast recent urban Democratic turnouts have been driven, largely, by people of color, who make up well over half of Milwaukee’s population.

In turn, Milwaukee’s voters made up about 14% of statewide votes in the 2020 presidential election.

Kyle Johnson, the political director of Black Leaders Organizing for Communities, said voters he interacts with want good education, clean water and “the ability to walk down the street and not get stopped by a cop and possibly lose our lives because we have Skittles in our pocket, the ability to sleep on our couch without someone busting in our house and legally defending ourselves and still getting shot, and it being just another day on the news.”

Christine Neumann-Ortiz, the executive director at the immigrant rights group Voces de la Frontera, said the top issue among people she interacts with in the Hispanic community is immigration reform, including a pathway to citizenship for undocumented immigrants.

In the 2020 election, voters in Milwaukee County precincts where over half of registered voters were Hispanic were about four times more likely to vote for Biden than Trump, according to a UCLA study on Hispanic voter choice.

That margin, the study said, was crucial.

“Even in places like Wisconsin and Georgia — where Latinos make up less than 5% of registered voters — the Latino electorate tipped the results in favor of Biden, who won by less than one percentage point,” it stated.

Polls show the Democratic grasp on Hispanic voters loosening, and it may loosen still with more Republican exposure.

“A lot of Latino families are more conservative than what people think,” Calderon said. “And I truly believe that they are prisoners in their own house if they say that they believe in something within the Republican Party because a (Democratic) stronghold has been here.”

Black voters, too, overwhelmingly voted for Biden and continue to favor Democrats, although some analyses show the Democratic hold on the Black vote is loosening too.

The Republican presence in Milwaukee grew in the past couple of years with the Republican National Committee’s Hispanic Community Center as well as a field office in a predominantly Black area, opened in early 2020.

Gerard Randall, the first vice chair and chairman of the Wisconsin Republican Party’s Wisconsin African American Council, said the party hasn’t done well in the past with outreach to voters of color but “will do a much better job of that going forward.”

Like the Hispanic Community Center, Randall said his office focuses on kitchen-table issues.

Tony Evers calls for education spending, $150 checks to residents in state of the state address

That strategy, McCoshen said, is key.

“If it’s an R versus D thing, the D will win every day in a big city,” he said. “But if we bring them along on the issues, we’ve got a fighting chance.”

Republican messaging about inflation, which in America has hit a 40-year high, may be effective in cities because it disproportionately affects people living in poverty.

Today’s inflation rate, UW-Madison public affairs and economics professor Menzie Chinn said, is a combination of “abnormal shifts toward goods consumption in a time of supply chain and labor supply constraints” as well as government spending and unemployment benefits that kept demand up.

UW-Madison economics professor Kim Ruhl said poorer Americans spend a larger fraction of their income on food as well as transportation costs — from fuel to used cars — all of which have seen hefty price increases.

“My suggestion would be to stop creating new entitlements, fix the entitlements we have, reduce deficit spending, stop adding to our national debt, secure our border and fix our legal immigration system to allow enough workers in to satisfy labor growth without depressing wages,” Johnson, the senator, said in a Wall Street Journal op-ed. “Unfortunately, these are not the policy proposals of the current administration.”

Their proposed solution may face headwinds among an urban electorate. One in 36 Black Wisconsinites is currently in prison, according to the Sentencing Project, higher than any other state.

“Democrats have come to realize how disastrous the ‘defund the police’ slogan was for them politically,” he said.

Perhaps the issue with which Republicans have made the most progress in cities is private school vouchers and policies that they say will improve a broken education system riddled with policies and practices they contend limit parents’ say in education.

Even Kyle Johnson at Black Leaders Organizing for Communities, who pushed back on ongoing Republican efforts to dissolve Milwaukee Public Schools, said support for private school vouchers is increasing.

Chergosky said some Republican policies to increase private school vouchers may appeal to urban voters, but cultural appeals to ban “critical race theory” in schools — which are popular in suburban and rural areas — may not.

After the recent roundtable with Johnson, Calderon recalled the days when Thompson, the former governor, would stroll through Milwaukee.

“He went to spend time with people. He got to know people, you know,” he said.

Then he spoke about the roundtable.

“All these hit-and-runs aren’t going to do anything for a party,” Calderon said about the hourlong event. “They need to invest in the neighborhood.”

At a media briefing following the roundtable, Johnson responded to Calderon’s request.

“I’d like to do it when it’s a little bit warmer,” he said. Johnson added that he’s engaged with the community, with the Joseph Project — Johnson’s program that connects people with job training and job opportunities — and some of his policy proposals.

Asked whether the Hispanic roundtable would be a new start for more engagement in Milwaukee, Johnson said, “Again, I’ve been involved. (I’m) a big supporter of school choice. We have limited time, so. It’s a big state. I’ve certainly been throughout all sectors in Milwaukee.”

McCoshen said GOP campaigning in urban centers is far more challenging than doing so in suburban or urban areas, where more people have similar political views and party affiliations.

“But it’s time that’s well spent,” he said about urban campaigning. “And it has to be done if we want to win statewide.”

Marquette University has received a $15 million gift from Marcus Lemonis, Camping World CEO and star of CNBC reality TV show “The Profit," who graduated from the Milwaukee school in 1995.

A Republican governor in 2023 would likely pass a bevy of elections and education-related legislation that Evers has rallied against.

The race is widely expected to be one of the most expensive and hardest fought in the country with majority control of the Senate on the line.

'It's creepy': Sen. Ron Johnson weighs in on transgender issues

The Oshkosh Republican has also become known for his off-the-cuff remarks, his occasional holdout on Republican bills and his embrace of conspiratorial ideas that occasionally hit the mark.

Tommy Thompson decides against another run for Wisconsin governor

Former Wisconsin Gov. Tommy Thompson, a Republican elected to four terms starting in the 1980s, announced Monday that he will not run for the office again this year. 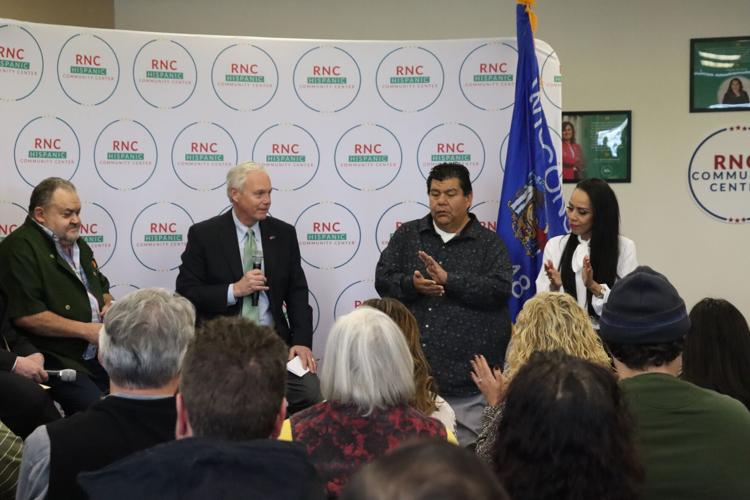 In the past few decades, Dane and Milwaukee County voters have almost exclusively chosen Democrats in statewide races, which political experts attribute partially to a lack of Republican efforts in cities, as well as rhetoric that often earns them suburban and rural votes at the expense of urban ones. 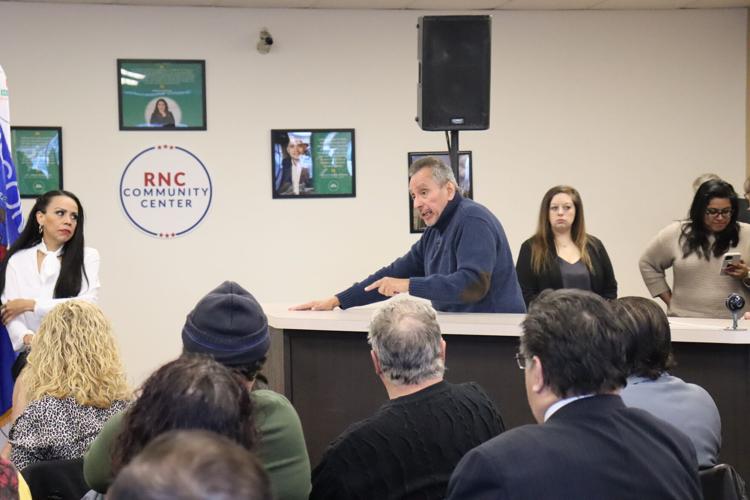 Vast recent urban Democratic turnouts have been driven, largely, by people of color, who make up well over half of Milwaukee's population. In turn, Milwaukee's voters made up about 14% of statewide votes in the 2020 presidential election. 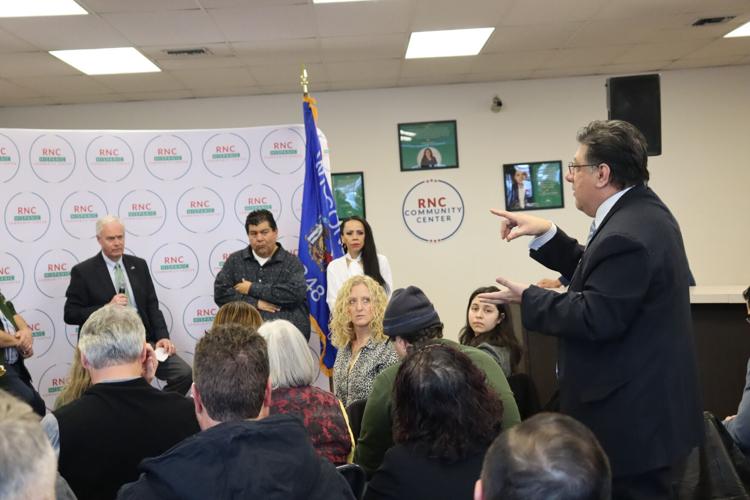 "All these hit-and-runs aren't going to do anything for a party," panelist Marty Calderon said about the hourlong event. "They need to invest in the neighborhood."