Republican Dane County sheriff’s candidate and detective Anthony Hamilton has sued the Sheriff’s Office in federal court alleging that officials conspired to remove him from the SWAT team for raising concerns about a search at a hotel in March 2021 he considered illegal.

Hamilton’s removal from the SWAT team stemmed from an armed standoff at the Magnuson Grand Hotel in Madison where Hamilton and other law enforcement agents searched a hotel room, the lawsuit said. During the search, Hamilton voiced concerns that the search was probably illegal, the lawsuit said.

Sheriff’s officials later lied in their reports about the incident, with Sgt. Mark Schroeder, who participated in the search, saying that he had ordered Hamilton to obtain a warrant, according to the lawsuit.

Law enforcement at the scene first said they had received permission from the hotel’s manager to search the room because no one had been living there. In an interview on Tuesday, Hamilton said he later learned that the hotel had been renting the room off the books, which technically made the search illegal.

Hamilton recorded the search at the hotel with a helmet-mounted camera at the time. But officials later said he had created an unauthorized recording which he later shared on Signal, an encrypted messaging application, with other members of the SWAT team, Hamilton said. 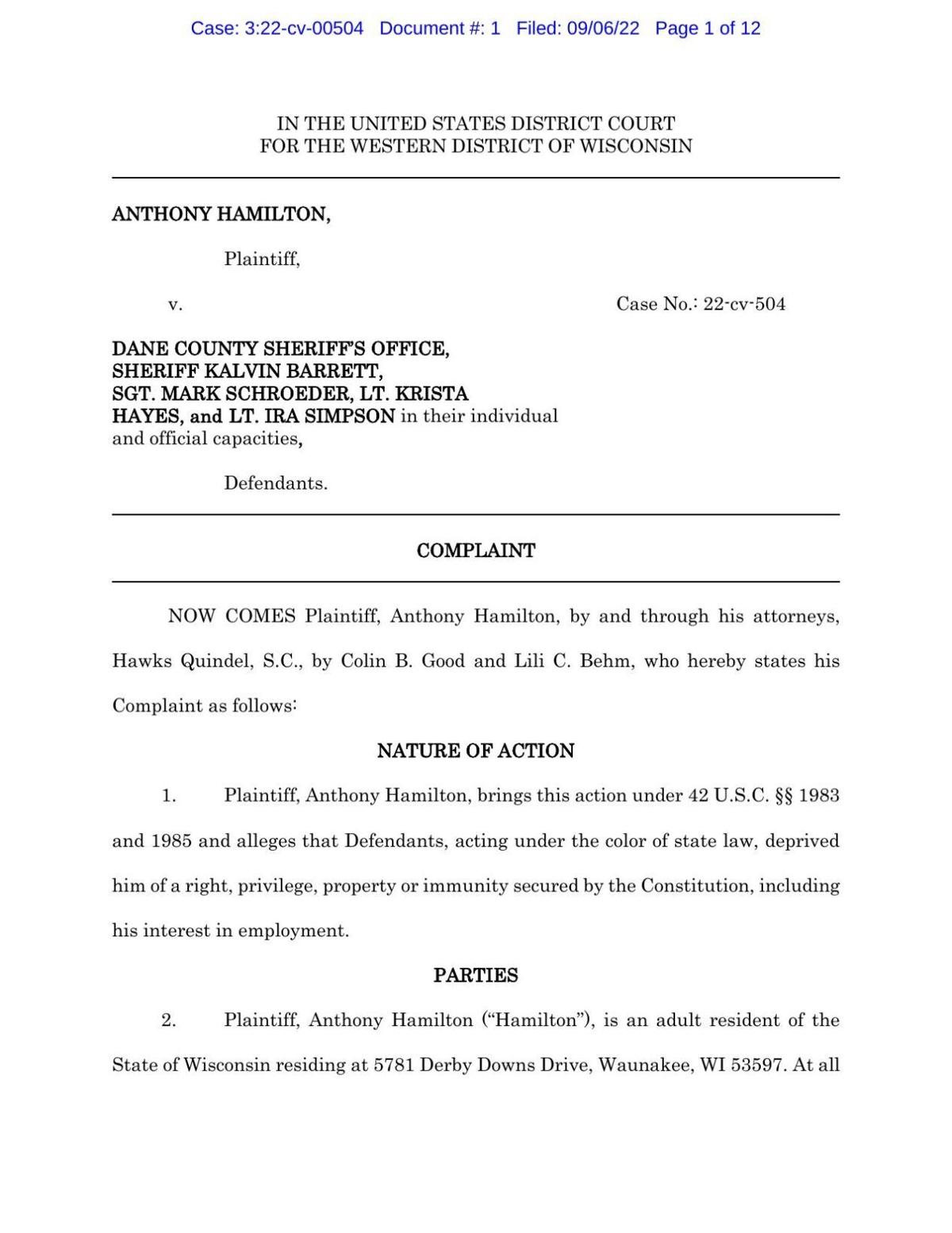 Ultimately, Hamilton was suspended for two days over the incident in October 2021. “False and/or misleading statements” about the search of the hotel were removed from his letter of discipline too, the lawsuit said.

“The office treated Hamilton differently than his similarly situated colleagues who were allowed to remain on the (tactical response team) and who were not suspended without pay, due to animosity its officials held against Hamilton personally and for his willingness to expose misconduct by superior officers,” the lawsuit said.

Hamilton said the discipline he did receive was for insulting Schroeder on Signal.

Hamilton has requested that an outside agency investigate the search and the Sheriff’s Office handling of the incident. No agency has been brought in to investigate, the lawsuit said.

The lawsuit names Schroeder, Sheriff Kalvin Barrett, Lt. Krista Hayes and Lt. Ira Simpson as participating in the conspiracy to get Hamilton off the SWAT team. The lawsuit asks for Hamilton to be put back on the SWAT team, be awarded damages for the ordeal and receive back pay that he would have gotten as a member of the SWAT team.

Sachin Chheda, a spokesperson for Barrett’s campaign, said the sheriff is aware of Hamilton’s lawsuit and is awaiting guidance from county attorneys.

“I can say that we don’t believe the filing has any merit, and demonstrates the desperation of a flailing candidate who will throw any mud he can in order to try and gain some political traction,” Chheda said.

Elise Schaffer, a spokesperson with the Sheriff’s Office, referred questions about the lawsuit to Mary Nelson, an attorney with law firm Crivello Carlson. Nelson did not immediately respond to a request for comment.

Schroeder did not immediately respond to a request for comment.

Hamilton will face Barrett, a Democrat, in the Nov. 8 election.

The lawsuit is not the first time alleged wrongdoing and complaints about ethics have crept into Sheriff’s Office politics.

During this year’s contest, Hamilton has made scathing criticisms of Barrett, accusing him of being overly political and focusing too much on “identity politics” because Barrett has prioritized hiring women and people of color at the Sheriff’s Office.

Last week, Hamilton released photos of Barrett posing with a registered child sex offender who had an active warrant out at the time of the photos.

Chheda said the sheriff regularly poses for photos with dozens of people every week while out in the community.

Two people died in the crash of an experimental airplane in western Wisconsin on Tuesday afternoon, according to federal and local officials.