Tuesday’s midterm election was a decidedly mixed bag for both major political parties in Wisconsin.

In both contests at the top of the ticket — the races for governor and U.S. Senate — tens of thousands of voters opted for one of the party’s candidates but not the other.

The gap was especially damaging for Democrat Mandela Barnes, who was seeking to unseat incumbent Republican U.S. Sen. Ron Johnson. Had Barnes, the state’s lieutenant governor, received the backing of all those who voted to reelect his fellow Democrat, Gov. Tony Evers, he’d be the senator-elect today.

So why did so many voters choose one of their party’s standard-bearers but shrug when they got to the other one?

Political insiders point to unequal spending and sustained messaging by their opponents as key factors to the outcome of both races.

“When you look at the campaign strategies, in terms of engaging in sustained, focused messaging, Ron Johnson and the Republicans accomplished that on the Senate side,” UW-La Crosse political science assistant professor Anthony Chergosky said. “Evers and the Democrats accomplished that when it came to the race for governor.”

Shortcomings in Democratic spending, unfocused messaging and an onslaught of negative Republican ads that the candidate didn’t adequately counter are some of the reasons insiders are giving for Barnes’ loss in the Senate race.

To be sure, it was a tight race. Out of almost 2,650,000 votes cast, Johnson led by just over 26,450. That’s a slimmer win margin than any Wisconsin U.S. Senate race in decades. And it was by far Johnson’s tightest margin in his three elections to the U.S. Senate.

But while Evers and Attorney General Josh Kaul staved off a purported red wave — one that also saw Democrats keeping Republicans short of a legislative supermajority — Barnes lost to the person many considered the most vulnerable Republican Senate incumbent.

Democrats fault Barnes’ relative lack of funding during crucial moments of the race, like in September when pro-Johnson groups aired ad after ad that painted Barnes as soft on crime and accused him of wanting to cut police budgets.

“I think when you look at those critical couple of weeks in September where he was so badly outspent, it almost seems like the left kind of let its guard down for a minute, and that’s when the Uihlein and Hendricks PAC came in,” said Democratic strategist Joe Zepecki in reference to Wisconsin Truth PAC, which put tens of millions of dollars behind Johnson.

Over four weeks around September, outside groups attacking Barnes outspent those supporting Barnes by $3.75 million, according to the Barnes campaign. That doesn’t include $3 million in additional spending coordinated between the National Republican Senatorial Committee and the Johnson campaign during that period.

“So when we were outspent 2-to-1 in September when voters started tuning into this race, it had a real impact,” he said.

A total of $144 million was spent on advertising in the state’s U.S. Senate general election, with Republicans spending $77 million to Democrats’ $67 million, the media tracking group AdImpact reported. Wisconsin’s U.S. Senate race was the fifth-most expensive in the country — after Georgia, Pennsylvania, Nevada and Arizona, according to AdImpact.

A hefty portion of the Republican spending was on anti-Barnes ads focusing on public safety, like a Johnson ad calling Barnes a “radical leftist” who wants to defund the police.

“They needed to more aggressively defend the crime ads,” said one GOP strategist who, like other insiders, requested anonymity to speak candidly about the campaign. “We just clocked them in the jaw left and right, and they didn’t have a response and never recovered.”

“The Barnes folks never got a handle on the crime narrative,” a strategist on the Democratic side agreed.

In one ad Barnes released to respond to the GOP attacks, he stands in a kitchen and unpacks milk from a grocery bag while saying the accusation that he wants to defund the police is a lie.

“We did extensive research which showed that having Mandela speak to voters directly to lay out his positions was the best defense to the GOP’s smear campaign,” Kozloski said. “During that time, we also continued running our positive ads, which is absolutely critical for a challenger to do.”

But Barnes’ response to the crime ads was far from Barnes’ only issue, strategists on both sides said.

One Republican close to Johnson’s campaign said he didn’t know why Barnes and the groups behind him didn’t put more emphasis on the Oshkosh Republican’s suggestion to move Social Security and Medicare to discretionary funding, which would open the mandatorily funded programs up to budget cuts.

“That was one of the biggest issues that I don’t understand,” the Democratic strategist said. “It’s always been seen as the third rail of American politics, and Ron Johnson didn’t just say, ‘I’ll touch the third rail.’ He said, ‘I’ll grab it, put it around my neck and parade it back and forth.’”

Kozloski said their research showed abortion was a bigger motivator than Social Security, though he said the latter was a particular concern for older voters.

“We prioritized the abortion message in our TV ads, knowing that other outside groups were also running ads on Johnson’s self-dealing and his position on Social Security,” he continued, adding that they spent a “considerable amount” sending mail to voters about the issue.

Another element in Barnes’ loss was relatively low turnout in Milwaukee County, where a nearly identical number of votes were cast in this U.S. Senate election as in 2018. But in 2018, U.S. Sen. Tammy Baldwin got nearly 40,000 more votes in the county than Barnes did Tuesday.

As votes were counted Tuesday night, it became clear that Tim Michels, the co-owner of Brownsville-based Michels Corp., was not hitting the margins he needed to upset Evers. A big part of that came down to the liberal bastion of Madison, where Evers saw a dramatic bump in Dane County votes that proved too much for Michels to overcome.

“I think that Dane County is a problem for us,” Assembly Speaker Robin Vos, R-Rochester, told conservative radio host Jay Weber Thursday. “They had a presidential-level turnout and most of the rest of the state did not.”

A person familiar with Michels’ campaign said the Republican’s underperformance in Democratic strongholds, but also areas of the state that trend toward conservatives, can be attributed to the same challenges Barnes faced in the race for U.S. Senate — not enough spending.

“We were wildly outspent in the race, and it’s not just TV ads — it’s every part of the race,” the source said. “The Johnson physical staff was three times the Michels staff. Resources matter.”

Evers and groups backing him spent nearly $57 million on ads after the Aug. 9 primary, compared with a little over $30 million spent by Michels and groups supporting him, according to AdImpact.

The same GOP strategist who noted Barnes’ lack of response on the crime issue expressed anger that Michels, a multimillionaire, didn’t put more of his own money in the general election after saying during the primary that he didn’t want big donations.

All told, Evers’ campaign spent nearly $37 million through Oct. 24, compared with nearly $25 million spent by Michels, including more than $18 million of his own funds.

“The Michels campaign really didn’t have any ads in the Madison market for the entire general election,” said GOP strategist and Michels supporter Bill McCoshen. “I’ve never seen that before. I thought it was a bad strategy at the time, and I think it had an impact.”

Not only did Evers improve on his 2018 performance in the county, but Michels also fared worse than former Republican Gov. Scott Walker, who lost to Evers four years ago. In that election, Evers brought in just over 220,000 votes, for about 74.7%, to Walker’s more than 69,000 votes, or about 23.5%.

“Walker’s numbers should have been table stakes, meaning you have to get those and then more than that,” McCoshen said. “So getting less is a very big problem.”

Evers also improved on his 2018 performance in the WOW counties of Waukesha, Ozaukee and Washington, which wrap around Milwaukee and include the state’s largest concentration of Republican voters. Michels underperformed Walker’s 2018 vote totals in all three counties.

“Republicans look sideways at me when I tell them they have to stop ignoring Dane County during elections,” conservative radio host Vicki McKenna tweeted Thursday. “But notice what happened this time around. And since the vaunted WOW counties are getting less red, the (Republican Party of Wisconsin) had better pay attention.”

Speaking at Madison’s O’Keeffe Middle School on Wednesday, Evers attributed his midterm victory to his performance in his first term as governor, but also Michels’ stance on matters including public education and abortion, which Evers said were “unconnected” from Wisconsinites’ values. He also said he’s uncertain as to why he received roughly 48,000 more votes than Barnes statewide.

“At the end of the day I also know that there are issues that transcend politics,” Evers said.

According to Friday's State Journal article "Spending, messaging won votes," the conclusion from both parties as to why their respective candi…

Preliminary turnout can be estimated at about 56.5%, or higher than in five of the last six midterms.

"Unfortunately, we didn't get over the finish line this time," Barnes said in conceding the race Wednesday.

Republicans are likely to achieve a two-thirds majority in the state Senate but not the Assembly, falling short of the required margin to override vetoes.

“At some point, if nobody will talk to you, you can't complete the survey, right?” he said. “That's the fear.”

"We know that out of 33 senators, 11 of them are Democrats, so the deck is a bit stacked against us," Agard said.

The openness to exceptions from Assembly Speaker Robin Vos appears to be a compromise following a midterm election that saw considerable Democratic turnout driven largely by the high court decision.

The upcoming election will either tilt the court to a liberal majority or extend conservatives' current 4-3 hold on the court.

"He said, 'I'm not going to come in. You've got this thing. I've seen all the numbers. It looks really strong, congratulations,'" Michels recalled of his conversation with Trump.

In places like Hudson, Wisconsin, right-wing voters see an America under attack

They see a dark place, dangerous, where freedom is under attack by a tyrannical government and clans of neighbors might someday have to band together to protect one another. 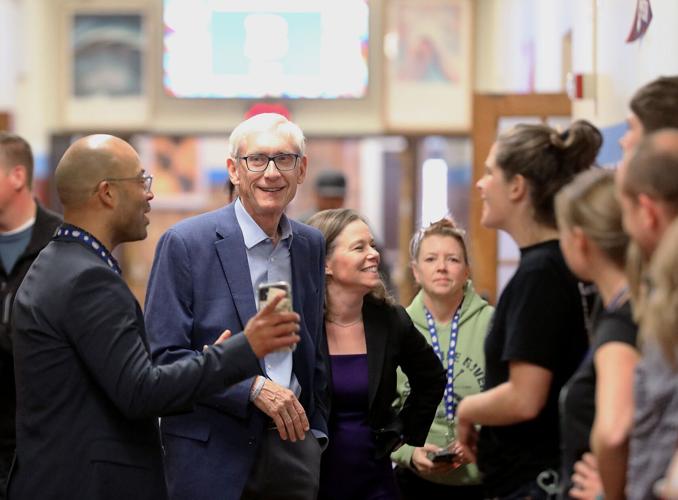 Wisconsin Gov. Tony Evers and Lt. Gov.-elect Sara Rodriguez visit with faculty and staff at O’Keeffe Middle School in Madison on Wednesday, a day after winning their race in the 2022 midterm elections. 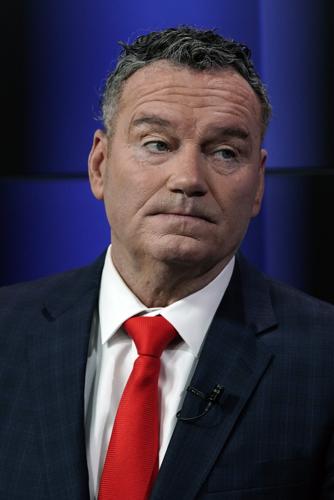 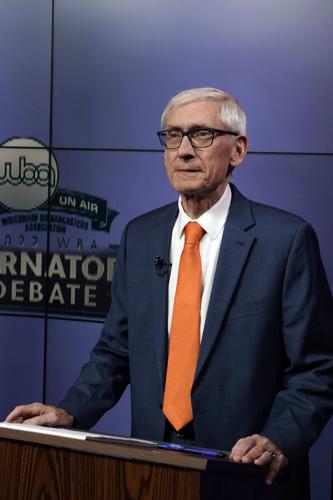 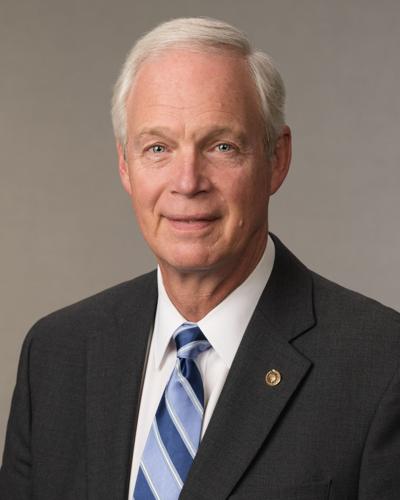 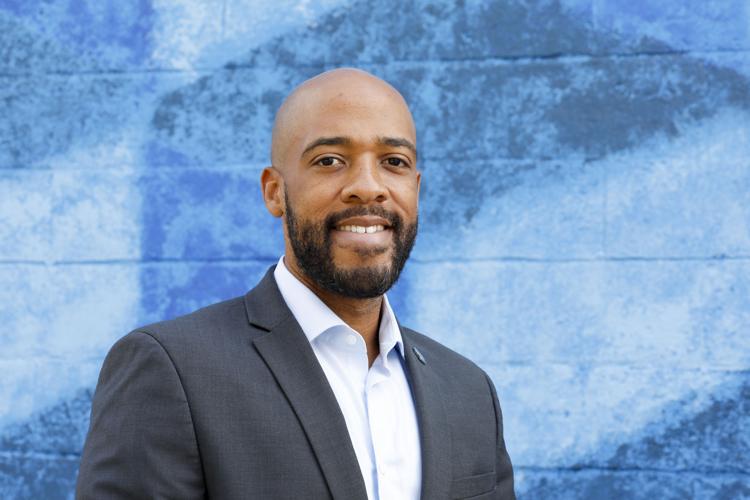